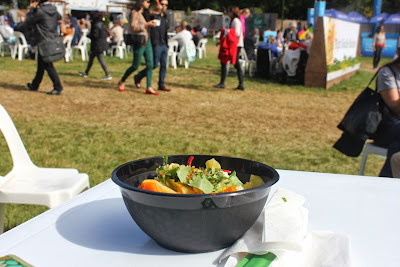 An unplanned early visit to the Good Food Night Noodle Market made for a pleasant afternoon on Sunday.  The market is a cluster of Asian-style eateries from Melbourne.  Crowds were constantly making their way in to eat al fresco.  My mother and I browsed the stalls, had a bite to eat and left while the sun had barely considered setting. 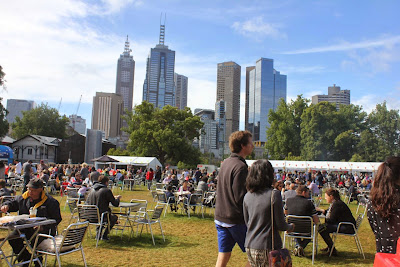 The markets have been temporarily set up in the Alexandra Gardens between 18 and 30 November 2013.  It is a charming location, on the banks of the Yarra River with the city skyline as the backdrop.  Chinese lanterns and fairy lights were set  up to add to the atmosphere if you stayed that late. 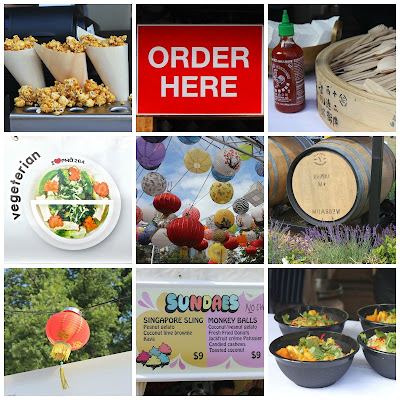 The night markets open on 4pm on a weekend.  We arrived at 4.10.  There were lots of vacant tables and chairs but the ground was already soggy in places from the rain we had had.

We passed Chin Chin's stall where my mum bought some chilli caramel popcorn to snack on.  It was very good, albeit quite spicy for me. 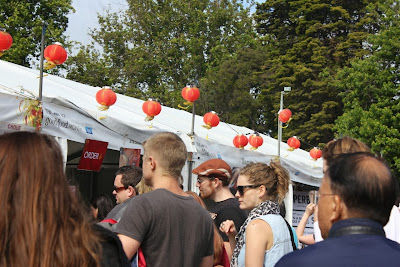 Mum spotted someone with dumplings and asked where they were from.  I don't remember the stall but I think it was the one with the longest queue.  While mum waited, I walked around the stalls to see what sort of vegetarian food was on offer.

I was pleased with the choice.  I was tempted by I Love Pho's Vegetarian Pho, Spanthai's Vegetarian pad see ew, a freshly made papaya salad (which I assumed could be made vegetarian) and spring  onion pancakes.   These are all dishes I would love to try when eating out but rarely get a chance.  I regret not taking notes on the Wonderbao vegetarian offerings but the queue was so long I didn't hang around. 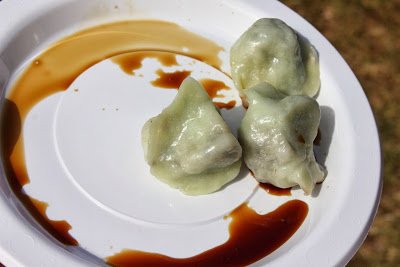 By the time I had checked out the stalls my mum was just placing her order for dumplings.  She gave me my plate of veg dumplings but had to go back for hers.  I really enjoyed the dumplings.  They had a simple but fresh and tasty filling of mushrooms and greens. 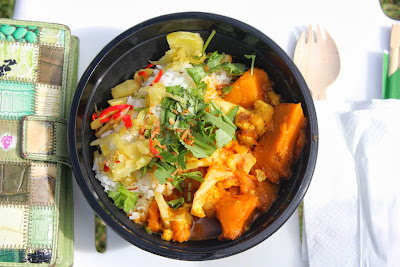 We then decided to buy a our early dinners at Longrain.  I was attracted by the focus on a few vegetables rather than a generic vegetarian version on a dish in their veg offering.  My yellow curry of cauliflower, pumpkin, mustard greens and chilli was rather good.  Very spicy.  But nicely cooked vegetables (were the pickled vegetables the mustard greens?) and lots of rice to mop it up.

What really amazed me was that by this time (4.30) there were no free tables.  We managed to nab a few lone chairs.  Then I heard someone say 'I guess we will lose our tables' as they walked away.  Oh yeah, I thought, as I took possession of the table. 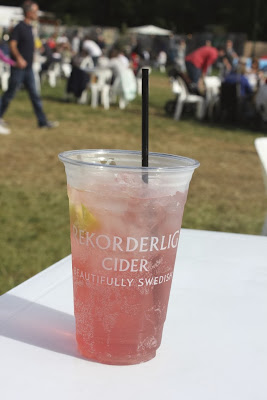 Then, just as I was about to go and buy a drink, a waiter came to our table to offer us to do it for me.  Mum and I shared a Strawberry and Lime Cider from Rekorderling.  It was delicious and fruity.  I do think that it was so easy to drink that you could get drunk on it rather quickly.  It made the chilli in my meal more palatable. 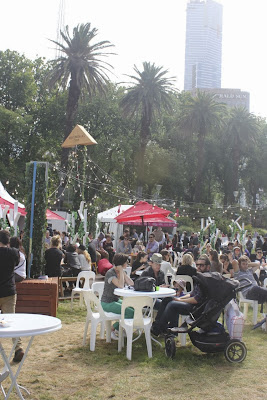 Then we were ready to leave.  Though the ice cream, sundaes and pancakes were tempting, we had eaten enough.  I would have liked to see it lit up at night but it was so busy so early that I don't think I would fancy being there when it was any busier - and by all reports it did get far far busier.

NOTE: I had read Steph's post on Vegan About Town.  (If my internet connection wasn't so bad tonight I might have checked out other reviews.)  She had quite different expectations and a very different (very negative) experience.  I think going early suited us.  I don't eat out a lot and so this was a nice chance to try different dishes, even if I don't recognise many of the stall names.  However if you expect a traditional Asian night market, it is worth reading Steph's reflections.