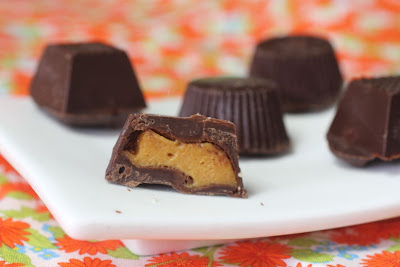 Healthy vegan chocolates with a smooth orange flavoured filling that is creamy with cashew butter and coloured orange by sweet potato.

What does it mean to me? The Morning with Richard Not Judy, also known as TMWRNJ was a satire on morning television shows. Richard Herring and Stewart Lee played the hosts (satirising Richard Madeley and Judy Finnigan who had a popular morning show).  The show included lots of silly chatter and even sillier sketch comedy such as 'When Things Get Knocked Over, Spill or Fall Out of Cupboards'.  Richard Herring would regularly look to the sky, shake his fist and yell out 'curse you God for making me this way'.


The anarchic undergrad humour was just the thing to watch in the slightly shambolic shared flat in Edinburgh where I lived while on a working holiday.  It was the sort of place where everyone had their shelf in the bar fridge and a cupboard for food.  Each person decorated their cupboard door with their own personality.  The kitchen has a hole in the ceiling and a television on the benchtop.

I had never heard of Lee and Herring nor the morning show they were satirising.  Yet it was quintessential British.  Great for sharing a laugh with a flatmate who was wandering n to put on the kettle for a cuppa.  And after working on a BBC comedy webzine I was in the mood for a spot of British comedy.  Later I saw Richard Herring in a play during the Edinburgh Comedy Festival and Stewart Lee doing stand up at the Melbourne Comedy Festival.  Neither live performance delighted me in just the same way their television show did. 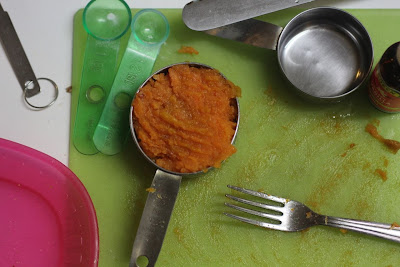 Food featured:
One of the silliest sketches was the Curious Orange, a man dressed as an orange who asked existential questions, had dalek tendencies and was revealed to be Richard Herring's illegitimate child.  No wonder the orange never seemed very happy.   In his honour I made some orange filled chocolates.  Actually I made the chocolates and decided they would go very well with this favourite sketch of mine! 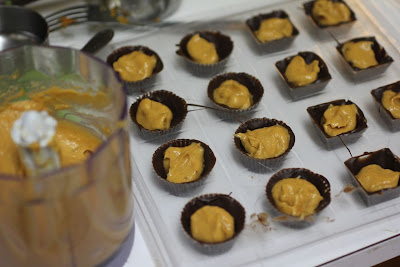 Recipe notes:
I went through a period of making filled chocolates earlier in the year.  My mum even hunted out some of her old chocolate moulds.  One reason I thought I would make sure I posted them is that chocolates make great presents and, in case you haven't seen all the decorations starting to appear in the shops, Christmas will be upon us before you know it.  Or if you live in the USA, Thanksgiving will be nipping at your heels even sooner.

After making some peppermint filled chocolates (and a few others that I must post soon), I had a notion to try a fruit-flavoured creamy filling.  I found a recipe for Strawberry Cream Filled Chocolate Truffles that intrigued me.  It used cashew butter, coconut oil and no refined sugars.  The chocolate was even home made.  I had some sweet potato which seemed a perfect pairing for an orange flavouring.

I wasn't brave enough to try a home made chocolate and reverted to a commercial one.  I crossed my fingers after some problems with chocolate bloom previously.  They seemed to work ok.  One day I will learn to temper chocolate to be crisp and shiny.  (Melting the chocolate in the microwave keeps the temperature down which is helpful.)

These were indeed lovely and creamy chocolate centres.  Not quite as much orange flavour as I had hoped but enjoyable nevertheless.  Consider them work in progress.  I only used half the filling and kept meaning to use the rest.  When I finally looked at the filling again about a month later, it was mouldy, despite being stored in the fridge.  They made great gifts but shouldn't be left too long before eating. 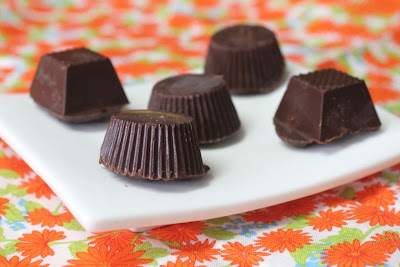 Random notes:
I made these when planning to meet up with fellow bloggers Kari and Mel when Kari was in Melbourne.  I was trying out some recipes from Ricki's book Naturally Sweet and Gluten-Free and thought they would love to taste the baked goods so I decided to make a little package for each.

I was quite tired at the end of the evening, having made cookie dough balls, icy poles, halva and the amazing sweet potato and choc chip muffins.  Fortunately I was motivated to keep going because I had some sweet potato leftover.  Chocolates seemed just the right addition to the packages.  It was lovely to sit and chat with Kari and Mel.  I was glad to be able to give them a taste piece of my baking. 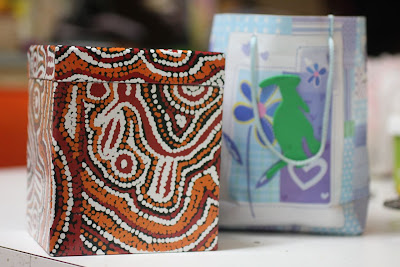 I am sending this post to Ricki Heller's Wellness Weekends; to Healthy Vegan Fridays #68, an event run by Gabby @ Veggie Nook, Carrie @ Carrie On Vegan, Katherine @ Green Thickies; and to Karen's Foodie Gifts for Christmas blog challenge at Larder Love.

Sweet potato and orange chocolate
Original recipe inspired by DAMY
made about 40 chocolates, depending on your moulds

*I baked the sweet potato in the skin until it was soft when squeezed and then I scooped out the flesh.  I just mashed it with a fork as once blended with the other ingredients it was quite smooth.

**To make your own chocolate, check out this chocolate.

On the Stereo:
Fathers Day: Weddings Parties Anything

This post is part of  my TV Dinners series.  You can see the other shows I have featured in my full list of TV Dinners posts.  In each post I reminisce about a favourite television show and cook a recipe inspired by food on the show.  I initially started this theme during Vegan MoFo in September 2013.
Posted by Johanna GGG at 11:45