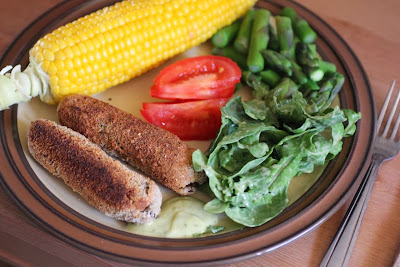 It is no coincidence that I am posting this recipe for vegan fish fingers on a Friday.  Old habits died hard.  During my childhood we always had fish on Fridays in Lent and often on other fish fingers.  That was what Catholics did.  Earlier this year I tried making veg fish fingers for the first time.  They were tasty but it made me curious to try other faux fish finger recipes.  Recently I tried a very different recipe. 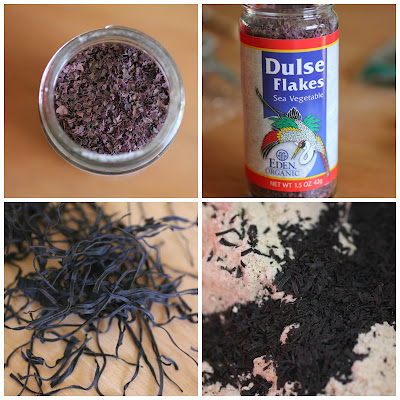 The first recipe I tried was a marinated tofu that was then dipped in breadcrumbs.  This recipe I made recently was quite different.  It was a mixture of soy, maize and gluten flours kneaded with other seasonings. 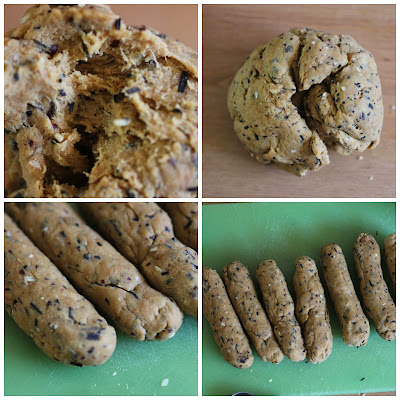 Yet again I enjoyed the dish but did not think it that close to fish fingers.  In fact it was less like fish fingers than the tofu one.  Not white or flaky or even oblong.  They were more like sausages.  Impressive sausages.  I've tried making a variation of the classic PPK sausage recipe before but it was too much gluten for me.  The 'fish fingers' recipe has more variety of flours and did not require steaming.  The recipe I was following said to bake them but it was a hot day so I fried them. 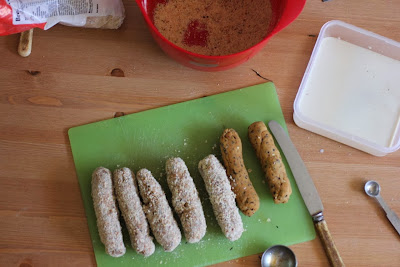 Despite the addition of dulse powder and seaweed, E said he couldn't taste seafood flavour at all.  I though I caught a faint whiff but maybe it was my mind smelling it rather than my nose.  I was really pleased that Sylvia enjoyed her sausage but she asked if I could do tofu fish fingers next time. 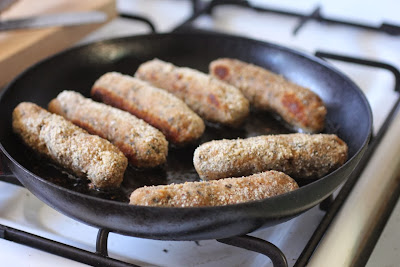 I used to love mayonnaise with my fish fingers as a kid.  I had planned to make Fat Free Vegan's tofu-cashew mayonnaise but lacked the ingredients.  Instead I used some avocado to make this green goddess salad dressing.  It worked really well with the fish fingers. 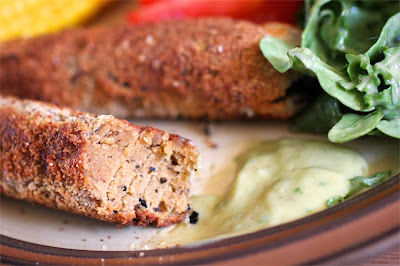 I will be making this recipe again but with different expectations and a few different seasonings.  Perhaps a bit of nutritional yeast flakes, some fennel, maybe even some herbs.  I might not have found my perfect fish fingers recipe but I think I have found a great sausage recipe.

I am sending this recipe to Ricki Heller's Wellness Weekends a weekly collection of healthy recipes from bloggers.

Mix all ingredients (except milk, breadcrumbs and oil) into a dough.  Knead for a few minutes until gluten strings appear.  If it is a bit dry (mine was) add a teaspoon or two of water. Heat oil in a non stick, heavy bottom frypan and fry the fish fingers until golden brown all over.  (Alternatively they can be oven baked.)  Eat warm.

On the Stereo:
Lennon Legend: The very best of John Lennon
Posted by Johanna GGG at 21:57