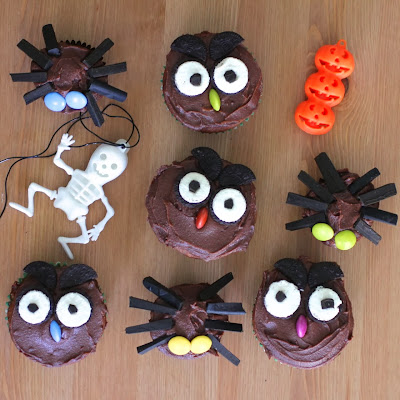 Each year when we hold a lunch to remember Alex and Ian I do some a fun birthday cake for them.  This year I decided do make cupcakes. Last year I knew what the theme of their cake was months in advance but this year no idea seemed quite right.  Finally I went back to the owl theme that constantly appeared on my Pinterest board.  A little bit cute, a little bit scary.  And to return to this year's Halloween theme for the birthday treats, I had enough mini muffins and lollies to make spider cupcakes too. 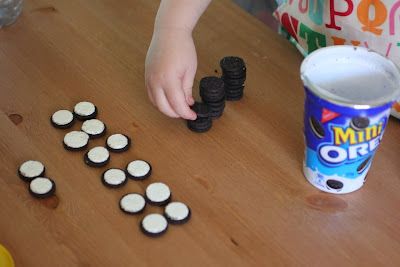 I saw lots of picture of Duncan Hines owl cupcakes using regular sized oreos to make oversized owl eyes.  Fortunately I found some mini-oreos which seemed big enough for me.  I had considered using chocolate buttons but the oreos were easier.  The hardest part about using them was convincing Sylvia they should be eaten via the cupcakes and not directly from the tub. 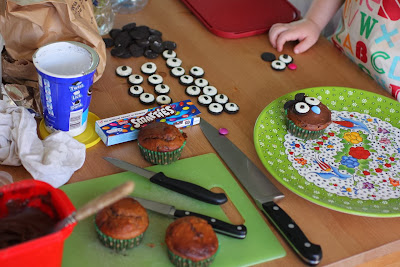 I baked a batch of Choc Honey Muffins the night before.  They were rather peaked on top so I had to slice the tops to make it flat enough for the oreos to stick.  Otherwise they were great for the project.  I used soy milk with a bit of lemon juice instead of yoghurt (due to bad planning) and found them a little drier than before.  Nothing a good coating of chocolate frosting couldn't fix. 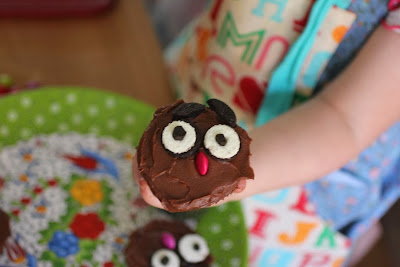 I find that cupcakes are far easier to decorate with kids than large cakes.  Small cakes mean that kids can do some in their own fun way and I can make some look closer to my adult standards.  I made my owl faces in a similar style to Duncan Hines.  Sylvia thought they looked angry.  She had a lovely time creating her own styles: the happy owl (above), the double beak, the moustache etc. 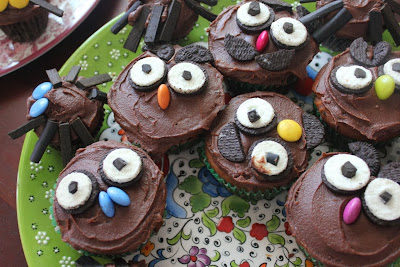 The spider cupcakes were also easy enough for a 4 year old to do.  But by then Sylvia had lost interest.  I was cursing having thick sticks of liquorice rather than the wheel of liquorice that could be cut into strips easily.  I started using scissors and soon progressed to my chef's knife to chop the legs.  The rest was a cinch.  Easy but it still took the time I was meant to be making the pizza. 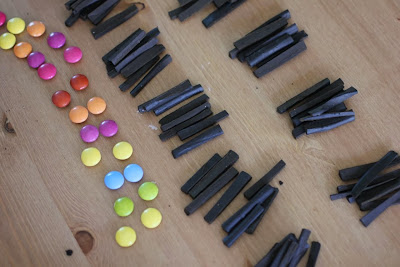 We had just enough cupcakes.  There were enough for us to enjoy one or two.  Large for big appetites and small for those wanting just a nibble.  Not many were leftover.  A couple were left here for us to eat the next day and a few were boxed up by my mum to take home to some of my nieces who appreciate such cupcakes.

You can also see my previous posts on Halloween treats this year:  Bat toast, Chocolate and pretzel spiderwebs, and Cracker spiders. 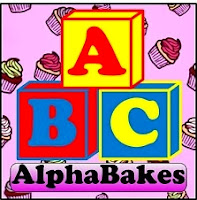 I am sending this post to Caroline at Caroline Makes for the Alphabakes challenge, which she co-hosts with Ros at The More Than Occasional Baker.  This month the letter is O for Owl cupcakes.

You will need:
1 batch of Choc Honey Muffins, made as 12 cupcakes and 10 mini muffins
1 1/2 cups of chocolate frosting (like this one)
1 box of smarties (about 50g)
1 tub of mini oreos (for owls)
1 packet of liquorice
Mini choc chips or mini m&ms (optional)

To make owl cupcakes:
Take apart each mini oreo.  Set aside 24 sides with icing.  Chop the uniced sides in half and set aside 24 of these.  (I found quite a few of the uniced sides crumbled when I chopped them.)  Now make the eyes by placing a mini choc chip in the middle of the white icing on each iced oreo.  If like me, you use up your choc chip, just chop some liquorice into as close a little circle as possible.  Be careful not to push too deeply into the icing or it will spread.

If your cupcakes are peaked, slice off the tops to flatten them.  (These tops are quite tasty so don't throw them again.)  Spread cupcakes with chocolate frosting. Place the eyes together. a smartie like a beak just below where the eyes meet and two half uniced oreos above the eyes like feathers.

To make spider cupcakes:
Cut liquorice into each legs for each cupcake and set aside.  Now allocate two smarties the same colour) for each set of eight legs.  Ice each mini muffin (these don't need to be flat).  Press 8 legs into the sides and then two smarties onto one side.

On the Stereo:
The Crook of My Arm: Alasdair Roberts
Posted by Johanna GGG at 08:23