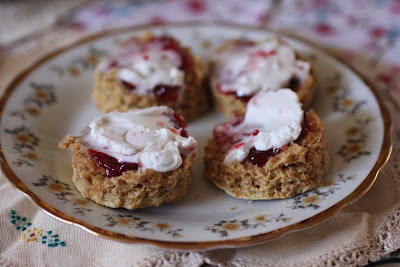 What it means to me:
The Goodies was a surreal and satirical British comedy based around three guys - Tim, Bill and Graham - who would do anything anytime anywhere, for a fee.  It was here that I learnt about punk, pirate radio and police brutality.  No wonder I have a skewed view of the world.  Only later when I lived in Britain and started to find out about recent history did I learn about many of the real people, events and issues that they spoofed.

As a young child I mainly loved the show for its silliness.  Little did I know that this was an excellent introduction to the stuff of British comedy: cream pies, ridiculous costumes, and a pompous posh twit.  I wanted a bicycle like theirs and a t-shirt with "The Goodies" on it.  When I worked at the BBC in London I saw a taping of The Clive James Show and was very chuffed that one of the stars, Graham Garden, was on it.

The show seemed to always be on the ABC just before we sat together at the table for tea (when we would turn off the telly because that Scary Doctor Who was starting).  Episodes were often repeated.  Which we loved.  These were the days before video recording and we depended upon repeats to get to know favourite shows.  One of my favourite episodes was the one with all the Rolf Harrises and the catchphrase "and don't the kids love it" but I guess that isn't so popular these days.  I also loved the punk episode which made me afraid of punks who I thought wore huge safety pins in their ears. 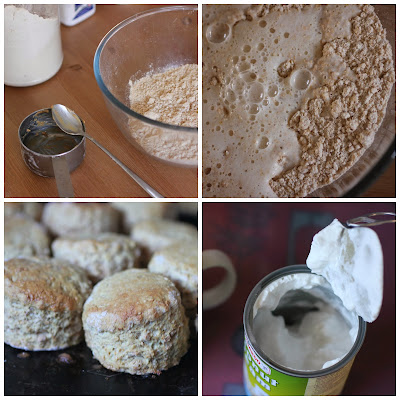 Food featured:
One of my favourite episodes (and there are many) is the Bunfight at the OK Tea Rooms.  I don't think I saw a Western movie until I was an adult - though I watched F Troop and occasionally Little House on the Prairie on tv as a child. 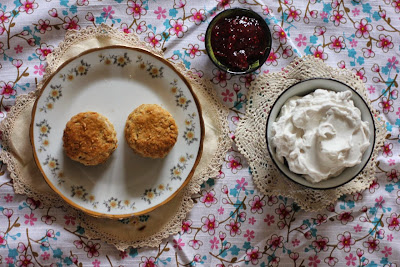 Recipe notes:
If you look through my recipe index you might notice that I love trying new scone recipes.  I like them round, light and fluffy.  These cashew butter scones are heavier than my usual ones.  I was intrigued by the idea of adding peanut butter rather than butter.  For us, with Sylvia's peanut allergy, I used cashew butter (and a spoonful of tahini when the cashew butter ran out).  These scones were sturdy.  Not a word my foremothers would have been proud to associate with scones.  Yet they had a certain nutty wholesome charm.

I had planned to make these for Vegan Mofo in September after seeing Sandy's peanut butter scone recipe.  Then I ran out of time.  Despite this, I still followed my plan to serve them vegan with jam and coconut cream.

For those who are yet to discover the delights of leaving a can of coconut cream in the fridge overnight, it is a great way to separate the creamy solids from the water bits.  Sort of like the unhomogenised milk we had as kids that had a layer of cream on top to be stirred or you could scoop the cream off the time and leave a watery milk for everyone else.  My mum often added some icing sugar to cream for cakes and scones.  I added a bit of maple syrup to my coconut version.

Given that I am not a big fan of cream, it is not surprising that I wasn't so keen on the coconut cream.  It tasted too much like cream to me.  It looked right when whipped - using electric beaters - but melted too quickly on the scones and in the mouth.  Not an experiment I'd bother to repeat.  It made me appreciate why Ricki Heller spent so much time developing her whipped coconut cream (Check out her Naturally Sweet and Gluten-Free Cookbook for an updated recipe). 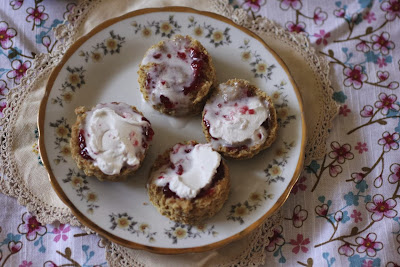 Random notes:
I made these after we had been to see E performing with his fellow ukelele players.  Sylvia and I then had a trip to the library and then park.  After a busy afternoon, it was lovely to bake some scones and enjoy them on the verandah, even though the awning had been blown away in the recent winds.  I'm happy to report we now have a nice new awning, thanks to our insurance company.

I am sending these scones to Healthy Vegan Fridays #70, an event run by Gabby @ Veggie Nook, Carrie @ Carrie On Vegan, Katherine @ Green Thickies.

Previously on Green Gourmet Giraffe:
One year ago: Dublin streets and miscellany
Two years ago: SOS Vegan Parsnip and Bacon Cake with Mustard Cream
Three years ago: Leonard Cohen, rice salad and the great outdoors
Four years ago: Pizza for the Impatient
Five years ago: Nut roast with chestnuts
Six years ago: Novelty Cakes from the Archives

Preheat oven to 220 C and grease a baking tray.

Mix flour(s), bicarb, and sugar into a medium large mixing bowl.  Rub in cashew butter.  Gently mix in soda water until the mixture comes together into a dough.  Gently knead for a few seconds until the dough is smooth.  Pat down to between 1 and 2cm thick on a floured surface.  Cut into round scones with a scone cutter.  Briefly knead the leftover scraps of dough, pat out and cut into more scones.  Repeat until all the dough is used.

Place scones on the prepared tray.  Bake for 10 to 15 minutes until golden brown (I found even after 15 minutes that my scones were slightly squidgy in the middle but maybe this is due to my oven being a bit slow.)  Wrap hot scones in a tea towel and serve warm.  Best eaten on day of baking but still edible the next day.

On the Stereo:
The Amber Gatherers: Alasdair Roberts

This post is part of  my TV Dinners series.  You can see the other shows I have featured in my full list of TV Dinners posts.  In each post I reminisce about a favourite television show and cook a recipe inspired by food on the show.  I initially started this theme during Vegan MoFo in September 2013.
Posted by Johanna GGG at 12:20