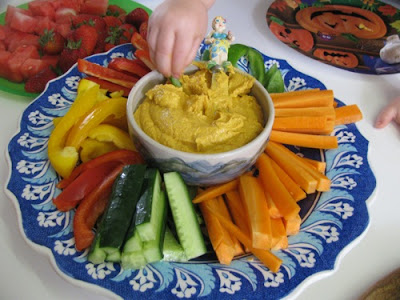 Today is the end of Vegan MoFo.  I am partly sad to finish the fun and partly relieved to have a break from a month of daily posts.  It seems fitting to end the month with some reflections and a recipe inspired by MoFo.  I have made more food than I could post in a month.  I am including photos of some of the dishes I had hoped to post (and may do so in the future).

My aim in joining Vegan MoFo was to challenge myself to post lots of vegan food.  I wanted to move outside my comfort zone both in what I cooked and what blogs I read.  At first I found the Vegan MoFo blogroll (658 blogs) overwhelming.  I still feel like I have only scratched the surface.  I only found out about Random Mofo yesterday (it generates mofo blogs at random).

It seems to me that you do nothing for the whole of the month except bunker down reading blogs, with assistants, and still not get through all the posts.  (Nor find time to participate in MoFo Iron Chef Challenges or other blog events or comment on all your favourite blogs.)  For a while it was unsatisfying wading through lots of blogs that just didn't interest me.  Not because they were terrible.  They just weren't my cuppa tea.

I like blogs with recipes that I might make, with some nice photos and thoughtful chatter.  I don't seek the basics or reviews of foreign restaurants or giveaways or recipes full of processed vegan meats and cheese.  Though if I have developed a connection with bloggers or if they are really well written, I don't mind any of these.  Mostly I find it hard to connect with bloggers without time to get them know them and their blogs.  Rapid scrolling through a feed reader feeling overwhelmed is not conducive to developing such connections.

Despite this, there were many wonderful discoveries on the blogosphere.  I loved some of the MoFo themes on blogs.  For example: Candies and Halloween ideas on Fork and Beans, Orange coloured recipes on Heathen Vegan, 1 recipe 5 ways on Veg-Am and A-Z on Veganise This.  See my MoFo recipe round-ups for more interesting blogs.  I have added quite a few new blogs to my feed reader.

Posting vegan food for a month was a challenge.  I am not vegan.  However, with an aversion to eggs and milk and creamy food, some days the idea of being vegan doesn't seem hard.  Indeed I quite enjoyed cooking vegan at home, most (but not all) of the month.  Eating out and cooking for others made it hard to do the vegan thing.  I did enjoy spending time in a (MoFo) space where being vegan was normal and having the chance to try more vegan cooking than I would usually.

It also gave me a chance to think about what parts of cooking I find most challenging when it comes to vegan cooking.  Baking without eggs still feels awkward.  Though I enjoy my clumsy attempts.  It is hard because - like replacing meat - there are so many options for replacing eggs.  I enjoyed experimenting with tofu, chia seeds, flax seeds, soy flour and even agar.  What I love about baking without eggs is not having to deal with icky raw egg.  Plus the substitutes are so much easier to halve than eggs.  So many interesting options!

Harder still for me is going without cheese.  I was pleased to make my first cashew goat cheese.  It was excellent.  I was really pleased to find this led to a vegan pizza that worked well for me.  I read a few people note that they found that home made vegan cheese sauce was better than anything they found in the stores.  I think this would be the case for me, given that I prefer home made meat substitutes.

Apart from the goats cheese, other highlights included being nominated twice for a Leibster award (thanks Jeni Treehugger and K and Toby), a spike in my blog stats when Veganasaurus linked to my vegan gluten free pumpkin cheesecake brownies, and JL Goes Vegan linked to my goat's cheeze in her weekly MoFo round-up.  I have a wealth of recipes ideas swirling about in my head.  Today as a final MoFo farewell, I will share one with you.

I was inspired by Scissors and Spice's Sun-dried Tomato and Roasted Red Pepper Pub Cream Cheese recipe but I wanted to use pumpkin and smoked paprika.  I am doing better with making cashews into creamy sauce since I got my little blender attachment to my hand held blender.  My problem with the dip was the overwhelming sweetness of pumpkin and cashews.  I felt I added quite a bit of salt and smoked paprika to compensate.  I am not sure I quite got the right balance but it was very moreish.  In fact, it was all but gone at the end of the day after having family over for lunch. 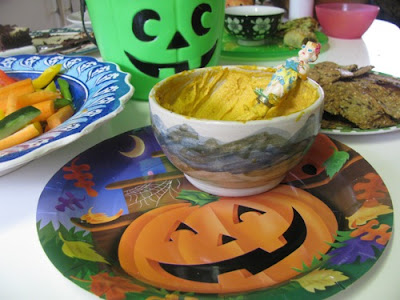 So that's it for Vegan MoFo 2011.  Thanks all those who shared great posts and were generous with commenting.  See you around the blogosphere.  Wishing everyone a happy halloween and a great festive season.  I'll be back soon, albeit not as frequently as this month, and with some of my lacto-ovo vegetarian recipes as well as more vegan ones.

On the Stereo:
Time Out: Dave Brubeck Quartet

This post is part of Vegan Month of Food October 2011.  Go to my Vegan MoFo list for more Vegan MoFo posts.
Posted by Johanna GGG at 19:40