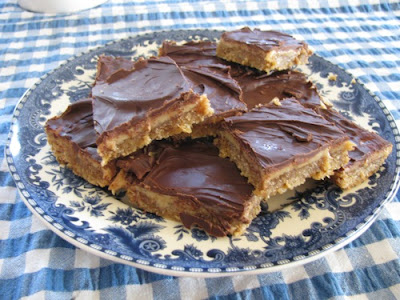 First day of VeganMoFo and I have lots of food to share but today is momentous because my team won the AFL Grand Final.  So today I am sharing this (almost) vegan gf version of chocolate caramel slice. because the picture is full of Geelong's team colours of blue and white.  It also is a delicious slice. 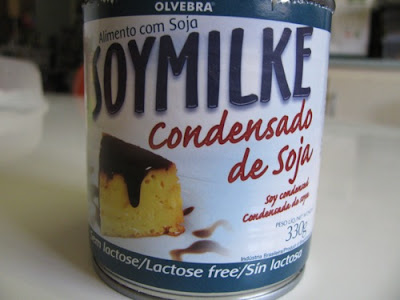 I was inspired to make this version of the slice after Steph made it for the recent bloggers potluck.  It went down well with E and Sylvia.  E has been asking for me to make the slice for a while now.  I found a can of soy condensed milk.  (Even the tin sports Geelong's team colours!) 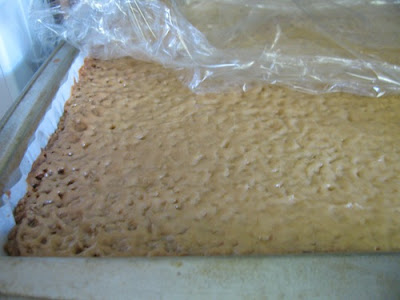 The tin only contained 330ml rather than the 395ml that the dairy condensed milk comes in.  Steph had used a smaller tin than my usual lamington tin.  I worried it wouldn't be enough condensed milk.  See how thin it was spread on the base in the above photo.  I also used GF flour which worked well.  I took it to Geelong where my brother Dave was making a roast (Carn the Cats, Dave!).  It was a huge hit. 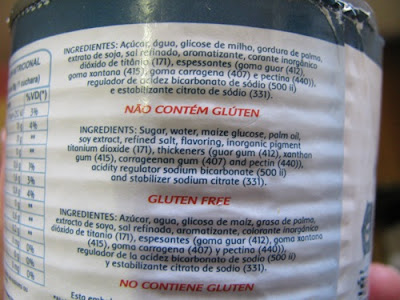 My only reservation about this recipe was when I looked at the ingredients for the soy condensed milk.  So many numbers!  I am curious about if I could make this dulce de leche for the caramel filling.  E is keen for me to make the slice again so maybe there will be an opportunity to try it.  (Update: I found it surprisingly easy to make soy condensed milk.) 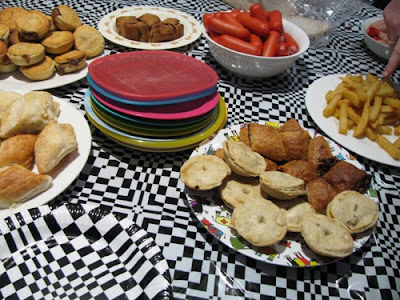 Unfortunately there was not time this morning to make the slice before I went to watch the Grand Final at my brother's place. Here is a sneak preview of the food.  More on this soon.  Meanwhile, Carn the Cats!

This post is part of Vegan Month of Food October 2011.  Go to my Vegan MoFo list for more Vegan MoFo posts.
Posted by Johanna GGG at 21:48