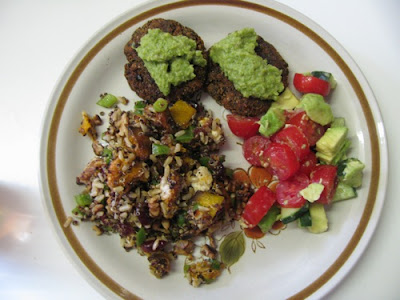 This is a post that demonstrates the best of Vegan MoFo: sharing food with bloggers, finding great recipes, veganising favourite recipes, and making connections in the vegan corner of the blogosphere.

One of the first recipes I spotted on Vegan Mofo that took my fancy was the Quinoa and Sun-dried Tomato Burgers on Miranda Writes.   I've never made burgers with quinoa before but have meant to.  I love sun-dried tomato.  The minimal amount of flour made them easy to de-glutenise when K and Toby came for dinner.  They went down a treat with some asparagus sauce and salads. The burger recipe is one of those ones that is not quite as quick as it looks.  While it just directs you to blend up all the ingredients, shape and fry, a few of the ingredients require preparation - such as cooking quinoa and chopping sun-dried tomatoes.  I changed around the flavours and grilled them rather than frying.  They were delicious, though I found the sun-dried tomato flavour quite intense.  The mildness of the asparagus sauce was exactly what they needed.

Fortunately the burgers and sauce were fairly straightforward to put together, if not as quick as I would like.  Mymain energies were saved for the cheeze for the pumpkin cranberry walnut and goats cheeze salad.  The asparagus sauce was based on one I have made a few times before with yoghurt.  It was incredibly easy to veganise.  I also tossed some tomato, cucumber and avocado with lemon juice. 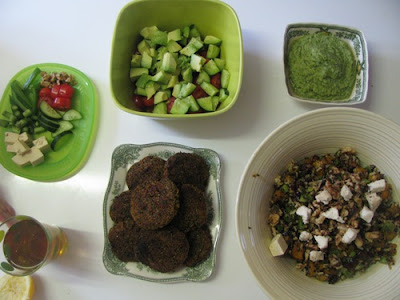 Fortunately I had prepared quite a bit ahead of time.  It can be slow going when there are small children about.  When I thought I would quickly run out to the backyard to get the washing, Sylvia suddenly took fright.  She was even anxious when I tried to go outside because there was something "really scary" out there.

We had a lovely time with K and Toby.  They brought along amazing raw cacao fudge cake pops for dessert.  As they left, Sylvia warned them that it was "really dark" outside.  I suspect it was just a ploy to stop them leaving because then next day she was making a house for them on the verandah!

Combine all ingredients in a food processor and blend well.  The recipe said to blend it until smooth.  Mine was mostly paste but still had some chunks of sundried tomato and some texture from the quinoa.

Chill in the fridge for at least an hour.  I left mine overnight.  Form into 8 small burgers (or 4 larger burgers).  Have some water on hand to keep your hands damp so that mixture doesn't stick to them too much.

Lay out burgers under the grill (broiler) and spray with oil.  Grill until crisp and browned.  I didn't time but you need to leave them for 5-10 minutes, checking every now and again.  Turn over carefully (they will be very soft underneath) and spray uncooked side with oil.  Grill until this side is crisp and browned.  This side will take less time.

The burgers are great with asparagus sauce and salad or Miranda suggests garlic aioli, lettuce and tomatos in a bun.
Asparagus sauce
inspired by this recipe

Cook asparagus until soft but still green.  I cooked mine for about 4 minutes in the microwave with a little water.  Blend with remaining ingredients until smooth.  Check seasoning.  Serve warm.

And now for the Leibster Award!

Lastly I was delighted to be nominated for the Leibster Blog award by Jeni and K and Toby.

“Liebster” is German and means ‘dearest’ or ‘beloved’ but it can also mean ‘favorite’. The idea behind this award is to bring attention to bloggers who have less than 200 followers and show your support during Vegan Mofo!

The rules of winning this award are as follows:
1. Show your thanks to those who gave you the award by linking back to them.
2. Reveal 5 of your top picks and let them know by commenting on their blog.
3. Post the award on your blog.
4. Enjoy the love and support of some wonderful people on the www!

I have chosen some of the great new bloggers I have discovered during Vegan Mofo.  There are so many that I have tried to pick ones that haven't already been given the award.

On the Stereo:
Transparency: Frank Zappa

This post is part of Vegan Month of Food October 2011.  Go to my Vegan MoFo list for more Vegan MoFo posts.