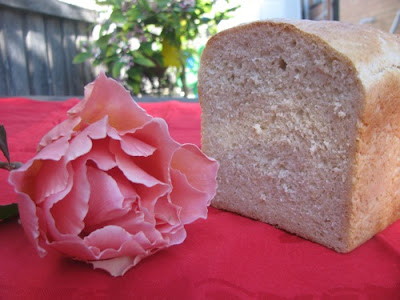 It has been the year of olive oil bread and chia seeds in Chez GGG.  I fell in love with a chia seed bread from the local bakery.  I loved the ever-so-slight crunch of the seeds.  They also promised all sorts of health benefits including omega 3.  Combining my olive oil bread with chia seeds seemed the best of both worlds.  After searching the web for ideas, getting paranoid and then returning to my original idea, I now have my own chia bread that I made regularly. 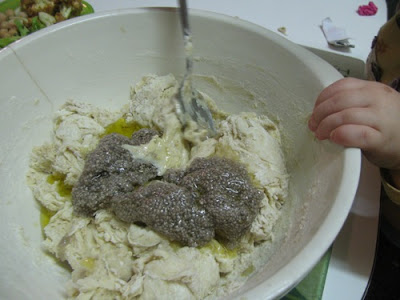 The bread we were buying was a very plain loaf.  I though it wouldn't be so hard to find such a recipe.  I just wanted to throw in a handful of chia seeds.  When I searched the web with questions like "can you add chia seeds to bread without soaking them" and "plain chia seed bread recipe", I found discussions like this one on the Fresh Loaf that told me chia seeds can absorb up to 12 times their weight in water.  I read about how great they are for binding in gluten free baking.  I tried soaking chia seeds before adding them to the bread. 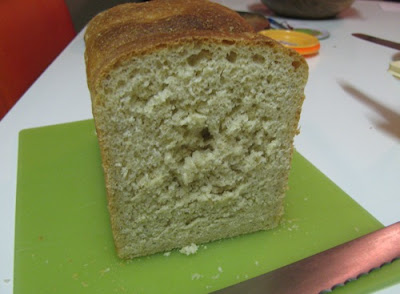 The results were terrible.  The addition of extra water made the bread too damp.  I was at my wits end.  I returned to my original idea.  Just add the chia seeds without any additional water.  This created exactly the bread that I was after.  Honestly!  Sometimes I should just follow my gut instinct! 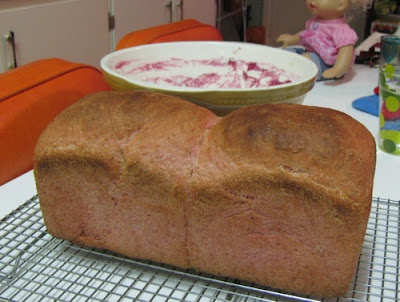 I would have posted about the chia bread earlier but for absent-mindedness.  We had a new oven installed in March.  My old oven wasn't fan forced.  (I think this is the same as convection ovens.)  It means that I cook at a lower temperature with the fan on.  I forgot to turn on the fan while baking a few loaves of bread!  Including this pink bread.  I used some leftover beetroot juice from a tin instead of some of the water.  Beetroot is a fun colour.  Yet it always disappoints when I cut open the bread. 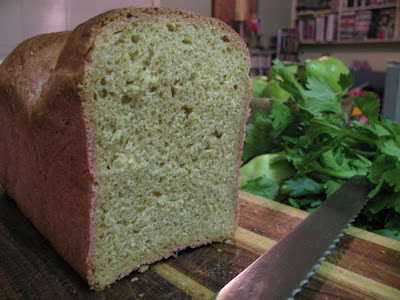 I have been making the chia bread for some time now.  I have a note in my drafts about leaving a batch of dough to rise for ages because I got caught up watching David Cameron answer questions about Rupert Murdoch in the British parliament.  Doesn't that seem ages ago! 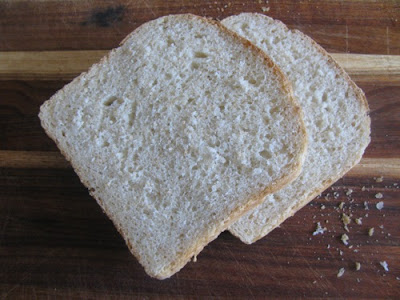 Now that I have found a recipe I really love, I make it most weeks.  I will be interested to see if I keep making it when the weather warms up.  I hope so.  (Though it is 28 C today and seems far too warm for baking bread - it is not even summer yet!)  There is something so satisfying about home made bread.  And it is extra comfort to know the recipe so well I don't have to concentrate much.  Most importantly, it tastes wonderful.  Thanks yet again to Brydie of CityHippyFarmGirl for introducing me to my favourite bread. 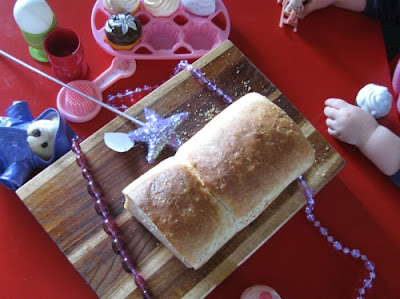 I am sending this bread to Susan at Yeastspotting, the weekly round up of bread baking bloggers.

1. Put yeast, chia seeds, warm water and the flour in a large mixing bowl.  Leave for 10 minutes.  It will be a dry shaggy mess at this point but don't worry.

2. Add olive oil and salt.  Stir to combine as much as possible.  It is a bit weird at first but after a good stir and some kneading it comes together.  is a not easy to add the oil and salt  but once you start kneading, it comes together beautifully.  Knead on a lightly floured board until you have a soft dough.  I usually do this for about 4-5 minutes but Brydie recommends 10 minutes.

3. Scrape out of the mixing bowl to make it as clean as possible without actually washing or wetting it.  Place the dough in the bowl and cover with a damp teatowel.  Let rise for about 30 minutes or until doubled in size.  I have left this to rise for over an hour and it seems to be ok.

4. Punch down and lightly knead for about a few seconds.  Return it to the bowl and cover with the damp teatowel and rise another 30 minutes or until doubled in size.

5. Knead briefly and either place on a greased tray or place in a greased bread tin.  I do the latter (my bread tin in 25cm x 9cm and about 10cm high).  I cut it in half, roughly knead each half into a neat ball and then press the two halves of the dough into the tray so they fill out the corners and are flat on top.    Cover with the damp teatowel and leave to rise about two thirds (usually over 30 minutes).  Mine gets to about an inch from the top of the tin but rises to the top once baked.

6. While the dough is rising, preheat the oven to 240 C.  To steam the oven I fill a loaf tin (not a shallow tin) with water and place it in the bottom of the oven (easier when the oven is cold).  Bake bread for about 30 minutes or until dough is a deep golden brown and hollow when knocked.  The crust might seem quite crusty when it is first out of the oven but once it cools it will soften and be full of flavour.

7. Tip loaf out of tin (or off the tray) and cool on a wire rack.  Leave for at least an hour, and more if possible, before cutting the first slice.  Lasts well for a few days but by then it is usually finished.

Note: this bread takes about 2 and 1/2 hours to make (or more) and then another hour or so to sit before cutting.

On the Stereo:
Lady in Satin: Billie Holliday

This post is part of Vegan Month of Food October 2011.  Go to my Vegan MoFo list for more Vegan MoFo posts.
Posted by Johanna GGG at 14:50