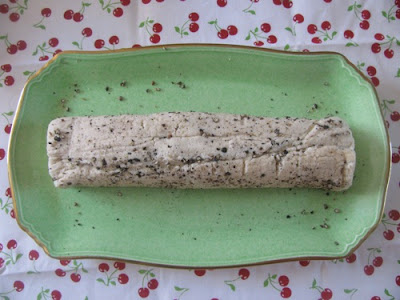 It started with a trip to the city to buy cheese cloth!  No.  It actually started earlier with a quaking in my boots at the very idea of trying vegan cheese.  I avoid draining anything in cloths.  Too time consuming.  I also haven't had much luck with getting a creamy texture from cashews.  A new blender and a recommendation gave me the courage I needed.

My aim was to make vegan goats cheese.  That is cheese made without any animal products, rather than cheese made from the milk of vegan goats.  Just so we are clear! 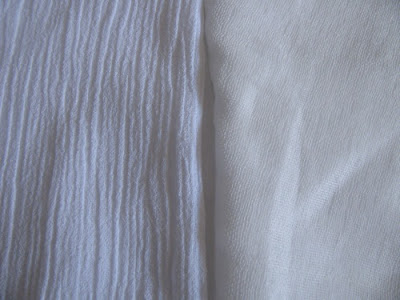 Even buying cheese cloth was a challenge.  The recipe said cheese cloth.  I went to a fabric shop and asked to see cheese cloth and muslin.  I was surprised at how different they were.  I got one of each.  If you are as ignorant about cloths as me, you may find the above photo interesting (cheese cloth on left).  My mum said I should have just used a tea towel.  But when I am out of my depth, I tend to follow the recipe closely. 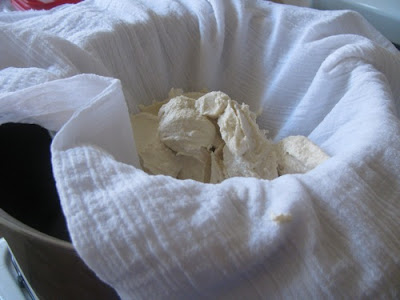 Unless I make mistakes.  Which I often do.  I soaked and blended and dumped the mixture into my cheese cloth.  It was very firm.  Well, cheese is firm, I reasoned.  The recipe said to strain out liquids.  Mine wasn't about to release any liquids. 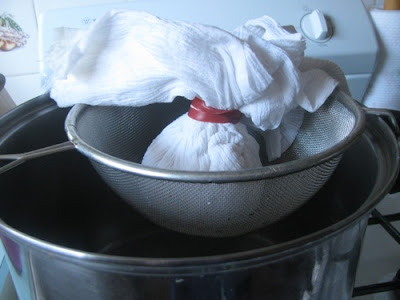 It was only the next day that I remembered that I didn't add the extra 2 tablespoons of water (as well as leaving out a bit of oil).  Did that make a difference?  The mixture still tasted strongly of salt and lemon.  Sharp!  I worried some of the saltiness should have drained away.  I washed my cheese blob that was fastened in the cheese cloth.  Still very little water came out.  Even after a few more hours. 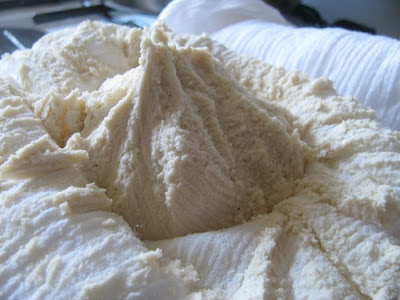 I searched for others who had made it.  Veg-Am had already made it this Vegan MoFo.  It was reassuring to read someone who had made it a few times advising that liquid does not always drain out of her mixture.  In fact, mine didn't look or taste terribly different after 12 hours of draining.  See photo above. 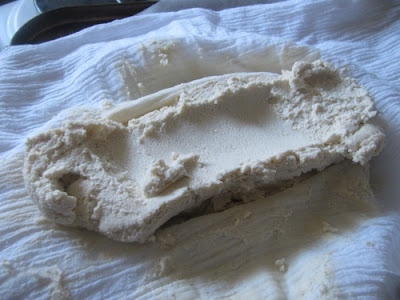 Then the recipe called for shaping into a log.  Easier said than done.  I mushed mine into a long slick (for want of a better word).  It looked pleasingly creamy.  Then I rewrapped it with the same cloth and used the cloth to help me shape the log.  I put it in the fridge to cool even though I wasn't sure how necessary this was. 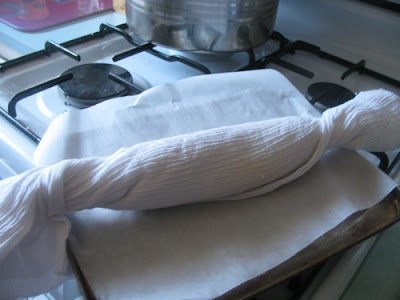 Even baking the log was not easy.  It was to be baked at 100 C.  My oven only goes as low as 120 C.  And the oven flame went out a few times while baking it.  Possibly as a result of the oven going out I baked mine for closer to 1 hour than the 35 minutes.  On one side of the log, the cloth was dry but it was still slightly damp on the other side.  I finally took it out when I thought it might dry out too much rather than when the cloth was evenly dry. 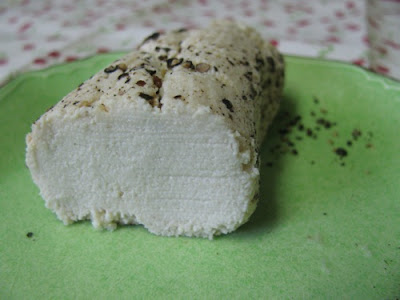 I was a bit half-hearted about rolling it in black pepper.  Next time I will coat it more thoroughly.  The cracked pepper is great with the tangy salty taste of the cheeze.  I was unexpectedly smitten with this cheeze.  I've never been a huge fan of goats cheese and I think I prefer the cashew version.  It is tangy and salty but smooth and easy to spread.  I have enjoyed it on salad, pumpkin scones, pizza and in a sandwich. 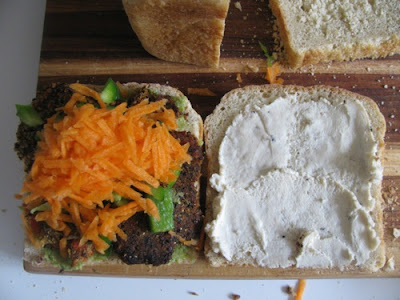 This is not a quick recipe.  It requires planning ahead.  It requires lots of patience.  It took me almost 48 hours to soak the cashews overnight, blend, drain, chill and bake the mixture.  But it is worth the effort.

1. Cover cashews with water in a medium bowl and soak overnight.

2. Drain liquid, rinse cashews under cold water, and drain again. (Oops, I only drained once!)  Purée cashews, oil, lemon juice, tahini, salt, and 2 tbsp water in food processor for 6 minutes, or until smooth and creamy. (I read that it really makes a difference to do it for 6 minutes so I timed it and got a sore hand because I was using the little food processor bowl that comes with my hand held blender so I had to hold the blend button down for 6 minutes!)

3. I simmered my cheesecloth in boiling water for 20 minutes, wrung it out as much as possible with rubber gloves and hung it on the clothesline.  Then I placed a strainer over the large saucepan and lined it with (damp) cheesecloth folded in three.  Spoon cashew mixture into cheesecloth.  I didn't read the instructions to make it into a log and fasten two ends with two rubberbands and I just made mine into a round with one rubberband securing the ends of the cheesecloth together.  Sit in strainer over bowl for 12 hours.  Discard any excess liquid but don't worry if there isn't any.  Chill (I left mine in the fridge a few hours).

4. Preheat oven to 100 C (200 F). Line baking tray with baking paper. Unwrap cheese, and scrape into 7-inch-long log on cheesecloth. (Easier if you make it into a log in the first place!)  Rewrap, and twist ends to secure. Place on lined baking tray. Bake 35 minutes, or until cheese becomes set on outside but still soft, turning occasionally.  Mine took 50-60 minutes.  Cool.

5. Unwrap cheese. Sprinkle with peppercorns and press them into the cheese - roll the log on the peppercorns that scatter on the ground. Chill and keep in the fridge.  Mine only lasted a few days because it was too good to hang around long.

On the Stereo:
Mothermania: Frank Zappa

This post is part of Vegan Month of Food October 2011.  Go to my Vegan MoFo list for more Vegan MoFo posts.
Posted by Johanna GGG at 21:59