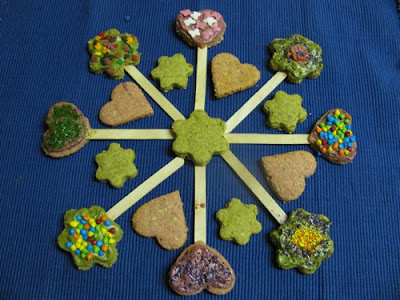 When I put Sylvia to bed, she often likes to ask what I will make for her.  She means baking.  Some days she is more specific.  She asks me to make lollypops.  A pink one for dolly, a purple one for me and a green one for you, she tells me.  I picked her up from child care the other day.  She had told her carer that we were going to make her yellow lollypops. 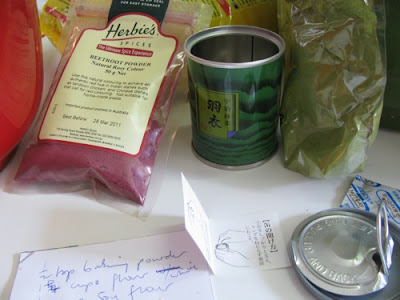 I think this lollypop obsession came out of my recent cake pops.  Maybe not.  In the newsagents she loves to play with the display of lollypops.  Yesterday at my parents' place I found her hiding in the loungeroom sucking on a lollypop she had found.

I find cake pops fun.  If only they weren't so sweet.  They also use lots of chocolate.  Not an everyday treat.  I have been thinking about how I could healthify lollypops for Sylvia.  Then it hit me.  Biscuits on a stick.  A la cookie wands. 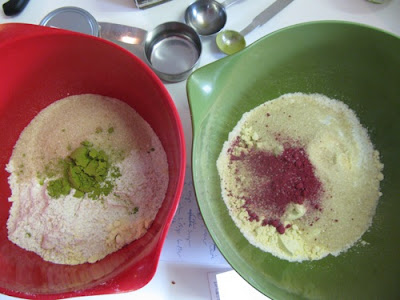 I found an old bookmarked recipe.  In the spirit of Vegan MoFo I veganised it.  The recipe appealed because there was no chilling the dough and it had a bit of texture.   I find buttery sugary biscuits dull.  I need some flavour or texture to interest me.  I used a flax egg.  Instead of water I used maple syrup for some extra flavour. 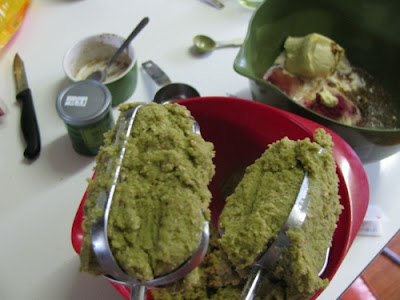 The hardest thing about making the recipe was trying to make different colours.  I was avoiding artificial colours.  Instead I used beetroot powder for pink and matcha powder for green.  I also considered tumeric or saffron for yellow.  Two colours were my limit.  I made two half-batches of dough.  The best thing about not using eggs is that it is so much easier to halve a flax egg. 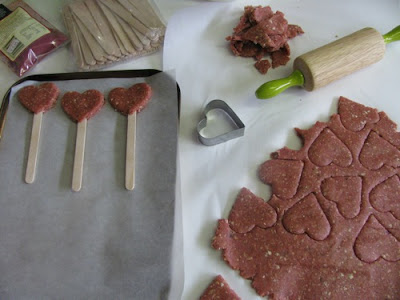 It was a great dough to work with.  The pink looked like raw minced meat (euwww) when I was working with it.  It was pale and pretty when it baked.  The green was a bit murky.  Natural dyes do not make dayglo colours.  Sylvia was very pleased (ie she wanted to eat them all).  I put her to bed for her nap.  When she awoke we decorated the biscuits. 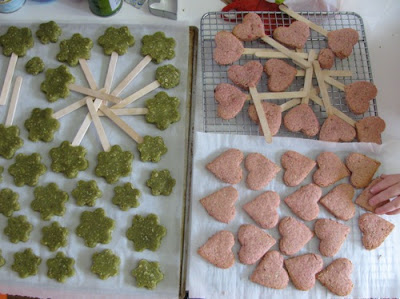 I am not a fan of icing.  It is just boring sweetness.  No nutritional value.  I am always looking for alternatives.  I found a guide to frosting without artificial colours at My Real Food Life.  Worth a try.  Coconut oil, nut butter and maple syrup.  It tasted delicious, though too sweet. 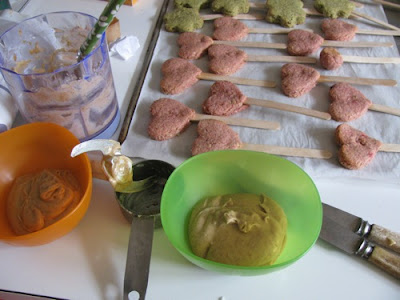 We coloured it with beetroot powder, matcha powder and a few extra artificial green colourings.  We decorated the "lollypops" with sugar sprinkles that I buy when temptation is too much.  I minimise rather eliminate sugar in my kitchen. 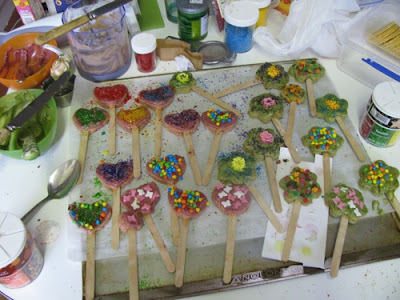 This icing was amazingly creamy.  One problem.  It just wouldn't set.  Even after a day, it was still sticky.  I have put most of the lollypops in the freezer.  I love their gaudiness.   To look at.  Not to eat.  Sylvia would gobble them all up.  Not a good thing either.  They have defrosted ok but the frosting is still soft. 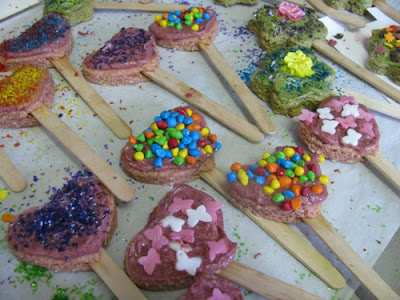 As for the biscuits.  I loved them.  The texture of the oatmeal is more to my liking than plain old flour.  They are rather sweet.  In an interesting way.  The beetroot and matcha powders have some flavour.  I think I would prefer the bikkies without either.  I did have visions of covering them in chocolate.  That is normal, right?  I suspect I shouldn't mess with them.  They are very good just as they are.

Preheat the oven to 190 C or 375 F.  Line a few baking trays with baking paper or grease them.  Mix maple syrup and ground linseeds in a small bowl and set aside while you get other ingredients together.  If you have rolled oats (as I did) grind to oatmeal in the blender or food processor and set aside.

Place flours, baking powder, salt, margarine, sugar, milk, beetroot or matcha powder and the maple-linseed mixture in a large bowl.  Beat with an electric mixer on low speed until the mixture comes together.  (Mine went through 3 phases - 1) floury, 2) a loose cauliflower-like texture with lots of flour down the bottom 3) it comes together into a ball of dough - actually most of mine caught in my beaters.)  Stir in oats.  I then kneaded it a bit with my hands to incorporate the oats properly but I didn't see that it said to beat another minute.

Roll dough to 0.5cm (or1/4”).  I rolled mine between sheets of baking paper which made it easier.  It didn't need any flour.  Cut into desired shapes.  If you want them on a stick, carefully push a stick in before placing on the prepared trays.  Place cutouts onto trays and bake for 12 minutes.  Decorate with your favorite icing, if desired (I don't think it necessary personally).  Can be frozen.

Mix in food processor.  Caution.  I found this frosting very sweet and it didn't really set so maybe it was too much maple syrup.  Next time I would start with a tsp of maple syrup.  It did spread beautifully.

This post is part of Vegan Month of Food October 2011.  Go to my Vegan MoFo list for more Vegan MoFo posts.
Posted by Johanna GGG at 20:33