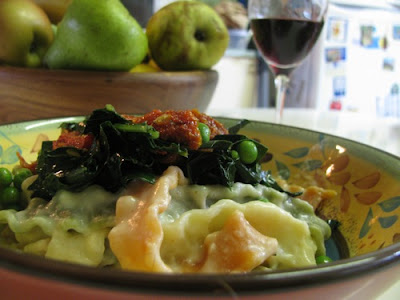 Creamy isn't my preference for pasta sauces.  Yet I still get fascinated every time I see a vegan alfredo.  Tonight I tried one from cupcakes and kale.  It was an unlikely combination of cauliflower, beans and milk.  An easy dish for a night when I was low on energy.  It was creamy but not as we know it.  I really enjoyed it. 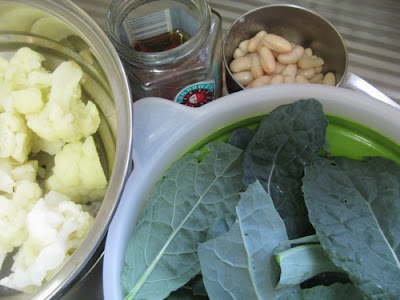 Sylvia hasn't been sleeping well.  Not good for getting up the MoFo post I intended!  Not good for serving small children.  I was so tired that I forgot to put some plain pasta aside for Sylvia before stirring in the sauce.  Dinner became the Battle of the Pasta Sauce!  She tried it.  For a while it worked.  Then she hit a bit of cracked pepper.  I never heard the end of how spicy it was.  I tried wiping sauce off the pasta.  She broke the pasta into pieces to decorate her plate.

Fortunately young children aren't really expected to eat well.  Especially not when they are unwell with a cold!  Their role at dinner is to entertain.  We got the biggest laugh when Sylvia called the cauliflower, which she did eat, "dollyflower". 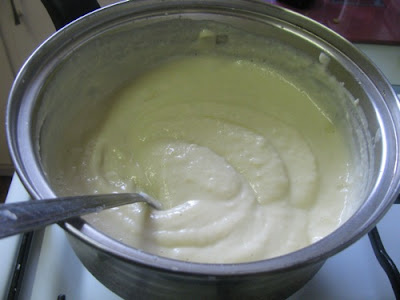 E also wasn't so keen on the pasta sauce.  He is not into creamy sauces either.  I find too much dairy heavy but creamy is such comfort food.  So perhaps it wasn't surprising that I found myself wanting to taste the sauce over and over before it went into the pasta.  Was it surprise at how creamy cauliflower and beans could be?  Or just that it was so tasty?  Either way I will keep trying these vegan creamy pasta sauces.

To make sauce: steam cauliflower for about 20 minutes or until it is so soft it is falling apart when a fork even looks at it.  While cauli steams,  heat oil in a medium saucepan and fry onion until golden.  Add garlic and cook another minute.  Turn off heat.  Add other ingredients to the saucepan, using only 1 cup of milk initially.  Once cauli is cooked, add it to the saucepan.  Blend until smooth and creamy.  (I used my hand held blender).  Add a little more milk if the sauce is too thick.

This post is part of Vegan Month of Food October 2011.  Go to my Vegan MoFo list for more Vegan MoFo posts.
Posted by Johanna GGG at 21:33