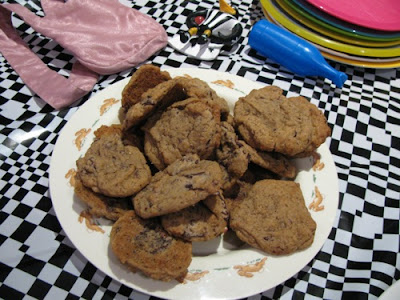 Great choc chip cookies should look like a pug dog.  They have the same sort of wrinkles as though they don't quite fit their skin.  Inside they shrink into a chewy gooey mess and the outside just can't keep up.  Obviously being vegan doesn't mean you can't have your choc chip cookie.  If I had a dollar for every time I have seen vegan choco chip cookies on the 2011 Vegan MoFo posts, I would be rich woman!  Today I add my own attempt! 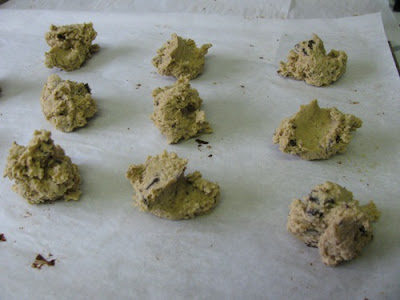 When I baked these choc chips cookies a couple of weekends ago, it took a lot of energy to convince Sylvia that they weren't for her breakfast.  They were for the grand final celebrations.  Not that my family appreciated them much.  They didn't appeal to the celiacs, or the choc chip averse, or those who just wanted to eat crisps.  More for us! 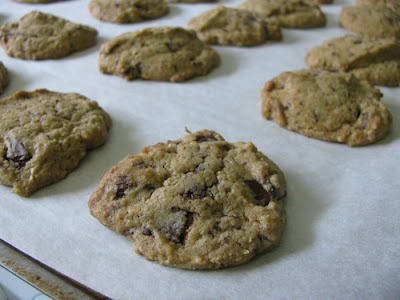 Fortunately, we loved them in our house.  They were amazing warm out of the oven.  Once cooled they were quite soft yet incredibly moreish.  Angela suggested using a little oil instead of margarine to make them crisper.  I might just try it.  Next time I also should chop bigger chunks of chocolate.  Never mind.  They were a great snack in the park the next day and disappeared within days.

I am sending these to Jacqueline of Tinned Tomatoes for her Bookmarked Recipe Event.

Vegan Chocolate Chip Cookies
adapted from Oh She Glows
Yield: 36 cookies
Preheat oven to180 C (350 F) and line a large tray or 2-3 smaller ones with baking paper.  Mix linseeds seeds with 3 tbsp water and set aside.

Cream butter and sugars.  (I did this by hand but you could use electric beaters.)  Add vanilla (if using), bicarb soda, cinnamon, molasses and salt.  Gently stir in flours and then chocolate.

Drop heaped teaspoons of batter onto prepared tray(s).  You don't need to shape or flatten them as they will spread.  Bake for 10-12 minutes (I did 12 minutes) until just lightly golden brown.  Rest on try for 5 minutes and then transfer to wire rack to cool.  Store in an airtight container.

* Angela suggests try substituting a tbsp of olive oil for one of margarine for extra crispiness.

On the Stereo:
Best of: Blur

This post is part of Vegan Month of Food October 2011.  Go to my Vegan MoFo list for more Vegan MoFo posts.
Posted by Johanna GGG at 20:59