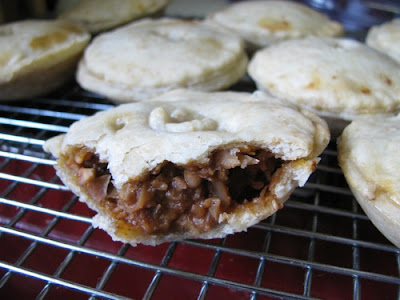 When children are born in Victoria
They are wrapped in the club-colours, laid in beribboned cots,
Having already begun a lifetime of barracking.
...
Hot pies and potato chips they will eat
They will foreswear the Demons, cling to the saints and behold their team going up
The ladder into Heaven

From "Life Cycle" by Bruce Dawe.

I first encountered this poem in high school.  Even then it resonated with me.  My dad's family were one-eyed Collingwood Football Club supporters.  My mum's father was a passionate Geelong supporter.  Most of my siblings and nieces and nephews have taken on the Collingwood team.  A few of us (me included) have barracked for Geelong.  Last weekend Collingwood and Geelong came face to face in the Grand Final for the first time in my life.  It was tense. 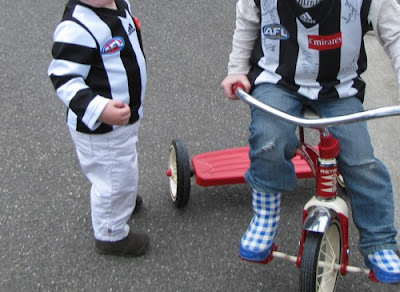 That's my brother's kids above in their Collingwood footy jumpers.  I don't have the passion for football that I once had.  I have sat through enough Geelong defeats in Grand Final to still feel great delight when they win.  These days, though, I am more keen on the footy traditions of getting together and eating lots of food in front of the telly for the Grand Final. 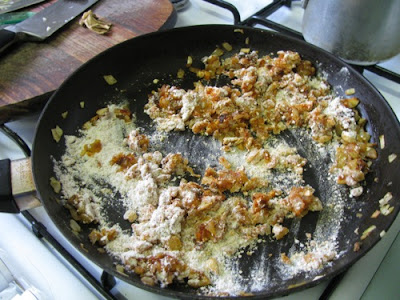 I went to watch the game with my family but wasn't allowed to mention the "Collywobbles".  I was allowed to mention the pies!  (For the uninitiated, Collingwood's mascots are the Magpies so they are affectionately referred to as the Pies.)  After discovering Ricki's Meaty Veg-Based Ground “Meat” recently, I still had a batch in the freezer.  I couldn't guarantee Geelong would win.  I decided I would at least succeed in making vegan party pies. 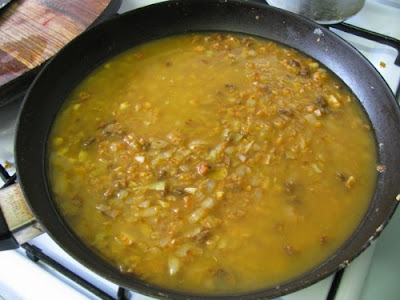 Australia prides itself on its meat pies.  Mince meat in a rich dark gravy in a golden flaky pastry case.  When I was young we called them "plasma pies" because we used to joke the fillings were just gristle and plasma.  They have been linked in the nation's psyche with football by advertisers.  They have told us that Australians love football, meat pies, kangaroos and holden cars, and that "you've got to have a Four 'n' Twenty pie before the game, without a Four 'n' Twenty it wouldn't be the same".

The pies I ate most as a child were party pies.  Smaller than the traditional meat pie, they were often served alongside sausage rolls with tomato sauce at parties or just for a weekend meal.  Gourmet Traveller describes them as "a version of the workaday coffin slimmed down, bite-sized and ready to entertain the after-five crowd as readily as the under-fives".  I often make sausage rolls but I don't think I have had a party pie since going vegetarian. 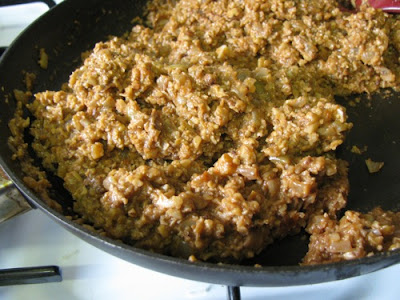 I had the "mince meat".  Some thought was needed as to pastry and sauce.  I searched the web for flaky pastry.  Many recipes used shortcrust pastry on the bottom and puff pastry on top.  I didn't want a shortcrust pastry so buttery that it would collapse in my hand.  Eventually I returned to my favourite crusty hot water pastry.  I did a trial run during the week with margarine rather than butter.  I used a tofu filling but had a little plain gravy leftover that I used with some "mince meat" for a test party pie.  It was a bit rich.  The muffin tins were too big so I thought I might try some smaller cupcake tins.

Fortuitously I saw Anh's meat pie recipe while I was considering how to make a more flavoursome gravy.  By the morning of the Grand Final I was ready.  I made the pies first thing.  Even so, they were just out of the oven and still hot before we left for Andy's place.  I wrapped them in a blue and white tea towel (Geelong's colours) and took them piping hot.  In fact they were so hot that they didn't get reheated much and didn't brown up as much as I would have liked. 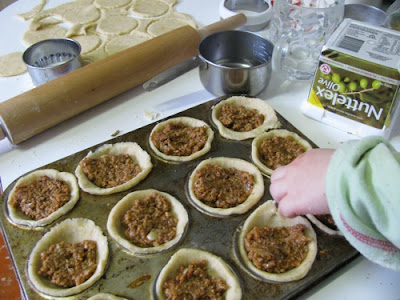 They were an excellent contribution to the footy food.  Sausage rolls, pies, chips and lots of tomato sauce.  In a black and white table cloth (Collingwood's team colours).  The feedback from those who tried them was good.  E even said they were better than the regular party pies (out of a box).

The football was terrible to watch.  The Collingwood supporters in the family take it so seriously.  Which is a very bad thing when their team are losing.  I didn't watch much of the match.  My time was spent checking on Sylvia, catching up with my mum who was just back from Ireland and kicking a footy about out on the road with my three year old nephew.  It was probably just as well that Sylvia was so tired and  narky that we had to leave as the match finished.  Geelong won.  Everyone else was too glum for me to enjoy it much.  My brother Dave was wise to celebrate Geelong's win elsewhere. 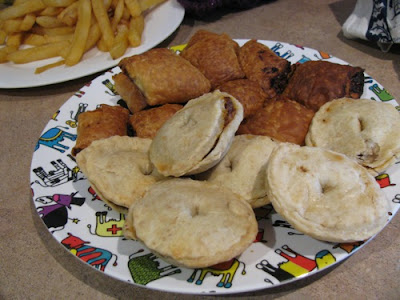 During the week I complimented a waitress at a cafe about her Geelong t-shirt.  We had a great chat about them winning the premiership.  It came to a halt abruptly when she asked me who my favourite player was.  Um, I don't have one.  I am not that sort of supporter!

Meanwhile I had leftover pastry and "mince meat" in the fridge.  After three days I could face the pastry again.  The pastry was grey and got binned.  The "mince meat" tasted of old cauliflower.  I'll tell you about how we used it another time.  I highly recommend these party pies.  They could do with a bit of tweaking but they weren't bad for a first effort.

More vegetarian and vegan Aussie recipes can be found in my Australia Day recipes round up.

Vegan Party Pies
inspired by Anh and Ricki
Makes about 24*

To make the filling: Fry onion in olive oil in a heavy based frypan.  You can fry it on a low or high flame depending on your time and patience.  It should get quite brown.  Stir in garlic and fry for about a minute.  Add tomato paste, worcestershire sauce, brown sugar, porcini and 1 tbsp soy sauce.  Stir together to make a paste and cook for a few minutes.  Add flour to the mixture to make a thick paste and cook another minute or two.  Now add water slowly, stirring into paste as you add it.  Bring watery mixture to a boil and it should thicken slightly.  Stir in the faux "mince meat".  Check seasoning and add extra soy sauce, salt and pepper as required.

To make the pastry: heat margarine and water in the microwave (or on stovetop) until margarine is melted.  Add flour.  Stir until it comes together into a ball.  Lightly knead and roll out to a thickness of about 0.5 cm (1/4 inch).

To assemble: Grease a couple of 12 hole cupcake tins.  Preheat oven to 200 C (400 F).  Cut circles to line each cupcake hole.  Fill each pastry hole with the filling.  Lightly brush the edges of pastry.   Cut out a slightly smaller circle of pastry to cover each pie and press down with your fingers to seal the edge.  Brush the pastry tops with soy milk.  Use a sharp knife to cut a small slit in each pie.  Bake for 10 minutes at 200 C.  Turn down oven to 180 C (350 F) and bake an additional 30 minutes until golden brown.  Serve warm.

** Anh used fresh mushrooms which I would have done if I had any.  I would also try this filling with red wine and maybe some fresh herbs next time. 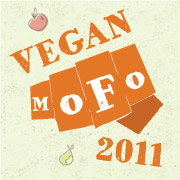 This post is part of Vegan Month of Food October 2011.  Go to my Vegan MoFo list for more Vegan MoFo posts.
Posted by Johanna GGG at 11:33