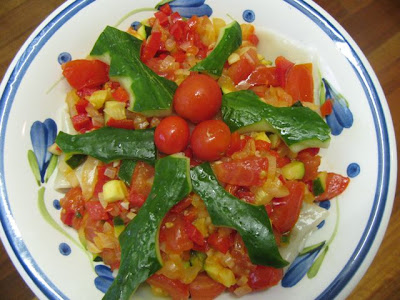 Hope everyone had a great Christmas (or holiday). I have a few festive posts to share with you from our Christmas. While I enjoy having the same nutroast each Christmas, I enjoy experimenting with other festive foods at this time of year. So when E suggested we should have a festive meal on Christmas Eve, I was only too happy to oblige. 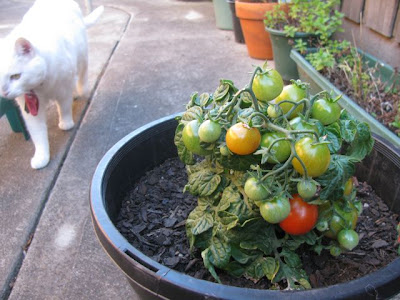 My inspiration came from a pot of cherry tomatoes that my mum had left for us in the backyard while we were on holiday and a packet of wanton wrappers that I had bought on sale because the expiry date was 20 December. 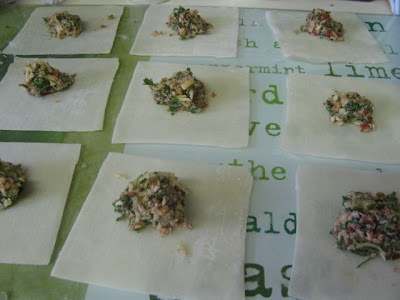 I had already tried a sweet ravioli (that I will blog later) but had plenty of wanton wrappers leftover from this experiment. The idea of any ravioli appeals to me and I was happy to try another idea. It really came from my love of nut roasts and the need to use up food in the house before Christmas. I blitzed some walnuts, mushrooms, cheese and flavourings in the food processor and dropped spoonfuls on the wrappers. 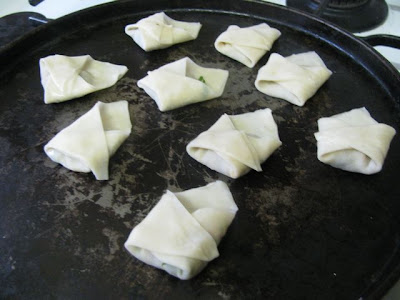 I am no whizz at wrapping ravioli so did little parcels like so. There are some ravioli recipes in the lastest Vegetarian Times and one suggests that the ravioli is frozen before cooking. I did this so that I could easily freeze whatever we decided not to eat. 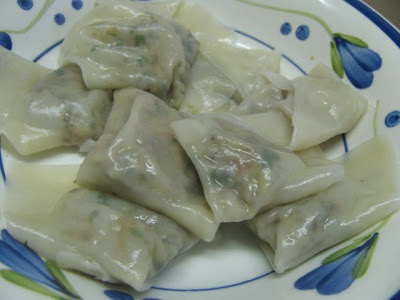 They cooked fairly easily and quickly and looked fine. But the piece de resistance was the topping which you can see on the top photo. I used my meagre harvest of cherry tomatoes for the holly berries and cut holly leaves out of slices of cucumber. The tomatoes and cucumber looked pretty but also make a good edible garnish. I'll even let you in on a secret. After the photograph I also threw on the trimmings from the cucumber. 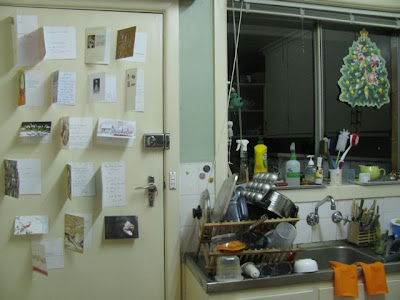 Christmas Eve was a busy day of preparing food, wrapping presents and getting the house in order. In addition to the pasta, I made nut roast and baked mince tarts. The nut roast is easy but pastry still challenges me. But by the time Carols by Candlelight was on the telly, we were finishing up and getting all the dishes done. (By the way, sticky taping Christmas cards to the back of a door is a Christmas tradition from E's family.) Then we were able to sit back and relax with a lime spider and a mince tart in front of the carols.

To make ravioli, place all ingredients in food processor and blend till it comes together into a paste. Lay about 9 wanton wrappers on a clean surface and cover the rest to keep them from drying out. Place a teaspoonful on each wrapper. (NB I had some filling leftover so I added some breadcrumbs and shaped them into burgers which went into the freezer.)

Use a finger or pastry brush to dampen two edges of the square. Fold over to make a triangle. Push all the air out and seal edges. Fold pointy edges over each other, with a bit of water to keep it stuck down.

Line up the ravioli on an oven tray (or plate) and place in freezer while you prepare the sauce. Or if you don’t want to use immediately, freeze for about 15 minutes on tray and then place frozen ravioli in a bag or plastic container.

While ravioli is in the freezer, cut the vegetables. Fry the onion, zucchini and red pepper for about 5-10 minutes until vegetables soften. While they cook, prepare a large saucepan of salted boiling water. Add tomatoes, garlic and salt to the vegetables. Turn up the heat to high and stir for a few minutes til tomato soften. Remove from heat. Add frozen ravioli and simmer for 4-5 minutes or until cooked.

Drain ravioli and divide among 3-4 plates. Spoon vegetable sauce over it and garnish with tomatoes and cucumber or green capsicum if desired.