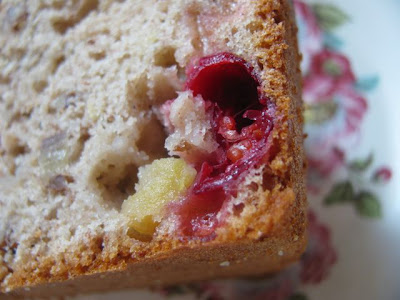 While staying in Edinburgh, it was a challenge to use as much of the food we were given and bought (though we still offloaded some onto E's sister, HH, before we left). I had some cranberries left after the nut roast and bananas that needed to be used. It occurred to me that they would be interesting together in a cake. I found just the recipe on Chocolate and Zucchini. 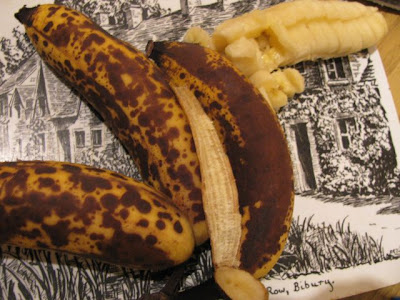 The hardest part of making the cake was finding time and energy. But the ingredients beckoned, especially once I had purchased some sugar, flour and pecans to complete the cakes. I finally got it in the oven at midnight one night. I didn't have enough cranberries but had some apples so I reduced the sugar and added apples. Having little opportunity to bake with fresh cranberries I was pleased with how good they tasted - not too bitter at all. I wished I had more of them to use. I also doubled the recipe so that I could use up more of most ingredients. 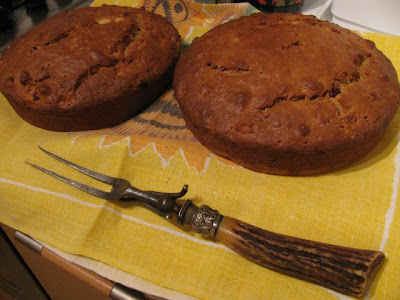 The other challenge was working in an unfamiliar kitchen. Most things I needed were there - cake tins, wire racks, mixing bowl, baking paper. But there was no food processor. It is only after I re-read Clotilde's recipe to reproduce here that I realised that she had mixed the mixture with the fruit in the food processor so hers would have been more chopped than mine. I guess I should have followed my gut instinct and chopped the cranberries. I also failed to find a skewer to check the cake was cooked but the next best thing was the long prongs of this lovely carving fork. 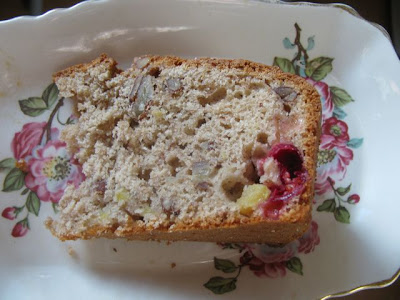 The finished cake was delicious when fresh out of the oven. Soft and fruity and filling the house with cinnamon scents. The next day I wondered if I really should have added the last 100g flour and omitted the water. It was quite dense but I have made cakes with apple before that are a bit soggy so I erred on the dry side. It tasted good still but I wondered if some butter would be good on a slice. Two cakes was far too much for us over the few days left. I took one to HH and I had some of the other one in the airport on the way home. Homemade cake has never tasted so good as it did when surrounded by soulless, plastic-wrapped food in transit. 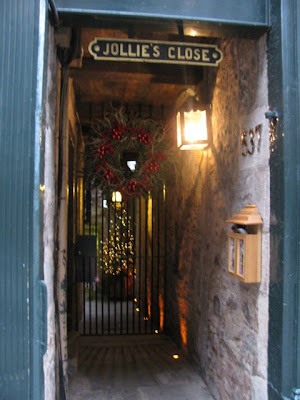 And as I only have a couple more Edinburgh posts, I will add a few gratuitous pictures of festive Scotland. It is not the same here, with 39 C forecast for tomorrow. I love the little closes off the Royal Mile in Edinburgh and the name of this one seemed just right to decorate for Christmas. 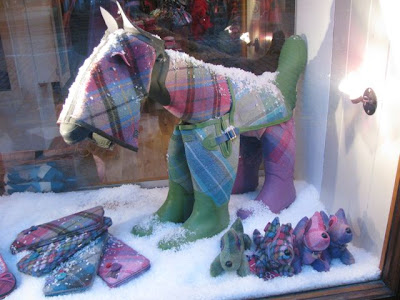 The Ness Clothing Company shop has such lovely tartan goods but I really want a pair of those gumboots. 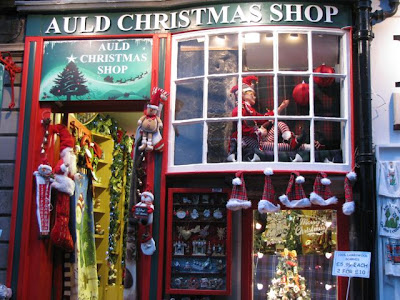 There are at least three Christmas shops in Edinburgh with lots of great Scottish Christmas decorations. I am a sucker for all the tartan tat but I managed to resist buying E one of the tartan santa hats.

Preheat the oven to 180°C. Grease and line 2 x 20cm cake tins. Cream the butter and sugar. Add eggs one at a time, mixing after each addition. Mix in fruit (or if you follow Clotilde’s instructions, you would have chopped the fruit well because she gave it a whizz in the food processor but I didn’t). Add remaining ingredients and mix. Pour into prepared cake tins and bake about 55 minutes (I did 45 minutes at 180 C in a fan forced oven) or until golden brown and a skewer inserted in the middle comes out cleanly. Sit 5-10 minutes and turn onto a wire rack to cool. Delicious warm and would be good with a lick of butter.

On the Stereo:
The People’s Friend A Christmas Ceilidh with the Francis Hogarty Band and Friends
Posted by Johanna GGG at 20:59