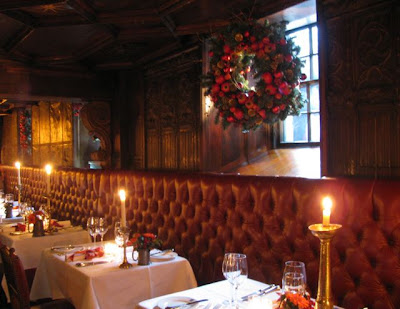 In the heart of Edinburgh's Old Town, high up Royal Mile just before you reach the Castle Esplanade, is a very fine old restaurant called the Witchery. E and I had a sumptuous meal here for our first wedding anniversary. I have long hoped that I might return there some day. 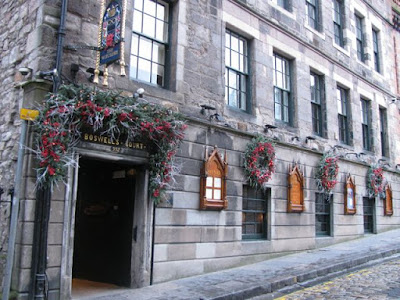 Last week (though it seems much longer ago) E and I booked a table for two at the Witchery. I originally discussed the possibility of bringing Sylvia but it just didn't seem the right sort of place to take a baby. She had lots of fun with her aunt HH and cousin Florence instead. So we had our first baby-free meal out for about 10 months. 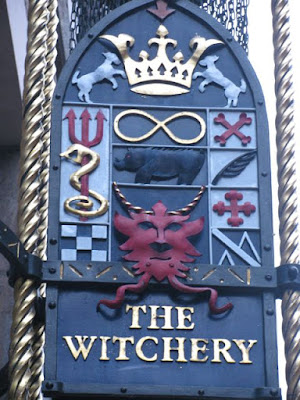 Apparently Edinburgh was the capital of witch-burning in Europe in the 16th Century. Much of this took place on Castlehill up by the Castle. Hence the name of the restaurant. E thought it looked a bit like something out of ye olde villages in Midsomer Murders but it would not have been out of place in the Witchfinder General.

We had already been past the front with the festive garlands on our visit to the Castle. But going inside is like retreating into the gloom. However, we arrived at the door only to be told we had been given a table in the Secret Garden. When I demurred, I was told we could have a table in the Witchery proper if we preferred. We had a quick look at the Secret Garden which is elegant but light and airy: not at all what we were after. 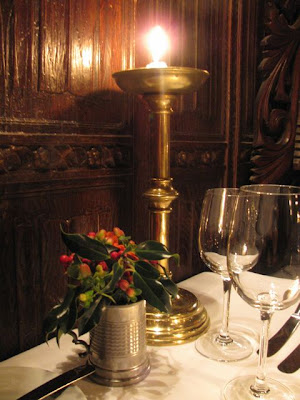 It was a table in the dark, wood panelled gloom of the historic building that we had booked and it was there we ate. The website says that the panels are original. They are beautifully carved and give the impression of a tudor banqueting hall. The tables are all candle lit. Tankards of holly on the starched linen table cloths add to the atmosphere. 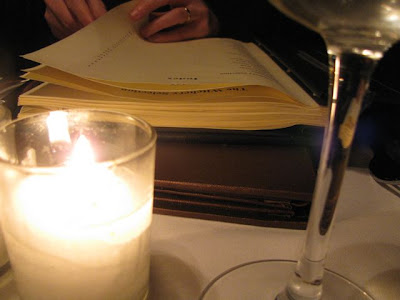 We had decided to order from the festive menu, which was a bargain at £30 per head for lunch. As a vegetarian, I didn't have much choice but enjoyed the menu's copious notes on the interesting history of witches and the building (dating from 1595).

However the best reading was the wine list. It is a literary masterpiece at 95 pages of entertaining prose about each wine. There are chapters for each country, or region in the case of France. I read some choice descriptions aloud to E and astounded him with the price of a bottle of wine going up above £3,000. I presume those who can afford such expensive wine can also afford to stay in the decadent hotel rooms at the Witchery which Danni Minogue describes as a "lust den". E chose a cheap glass of German reisling but was so overwhelmed by the wine list he asked for help and was given friendly advice. 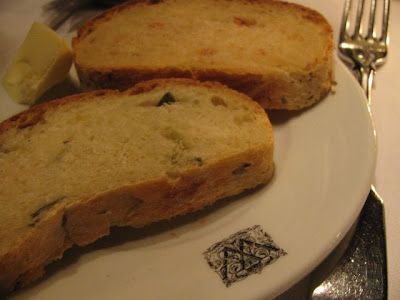 The service is impeccable: friendly and attentive but discreet. Once we had ordered, the waiter came with a basket to offer us a variety of breads. I chose the leek bread and E had tomato bread so we were able to taste each others. You could really taste the leeks in the bread. We were also offered more bread with our main dish too. Note the monogrammed plate. 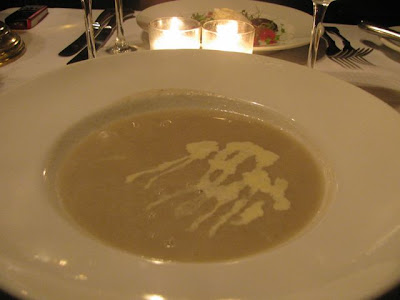 For starters I ordered butter bean and chestnut velouté, with truffle cream. It was quite a thin soup: remarkably tasty but light enough not to fill me up before the rest of the meal. 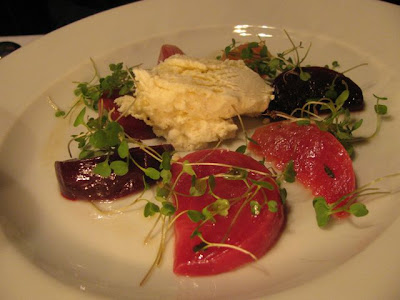 E ordered the roast Arran beets, goats cheese and micro sprouts. It was far prettier than mine with different coloured beetroot wedges and he was most impressed with it. 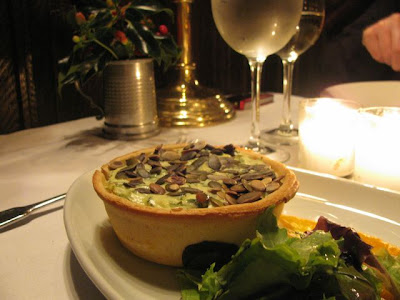 We both agreed that the mains were the low point of the meal. All the food was lovely but my roast pumpkin, ricotta and parmesan tart with a green salad failed to enthuse me. I loved the pastry, which was a buttery and crisp shortcrust that is superior to those you might find in the high street bakery and I really liked the roasted pumpkin seeds on top. But I was not so keen on the pumpkin being served as cooked chunks below a creamy ricotta filling. I would prefer a filling which merges together more. So it was good but not great. 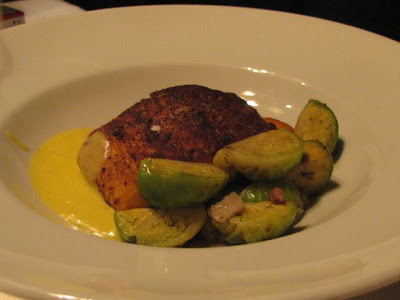 E likewise was not overwhelmed by his cinnamon spiced Loch Duart salmon, sweet potato, brussel sprouts and hollandaise sauce. I did like the philosophy of the Witchery in sourcing good quality local ingredients, which meant even their average dish tasted good. 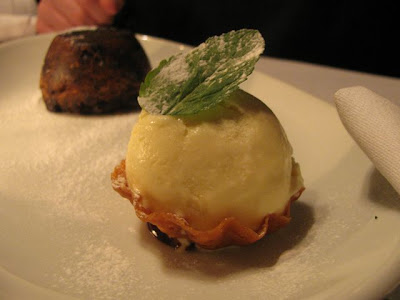 It was the desserts where the Witchery excelled. For our festive meal, E couldn't go past the traditional plum pudding with honey ice cream. I was tempted and actually got to polish off his leftovers. This was an excellent dense pudding that was full of moist plump fruit. The honey ice cream was an unusual pairing but just so right. You will also see that despite being a traditional dessert it was presented with panache. 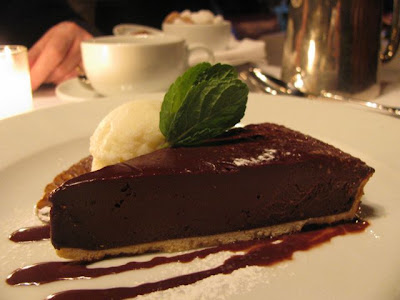 The only thing I can remember about the meal we had some years ago for our first wedding anniversary is that the chocolate tart was superb. When I ordered the Valrhona chocolate tart with white chocolate and mint sorbet, I wondered if this was the same one. I am not quite sure it was but it too will remain in my memory long after this meal has passed. This was one of the best chocolate tarts I have ever had. It will be too rich for some but the accompanying sorbet helped to lighten the taste. I barely noticed the pastry because I was so taken with the intense creamy chocolate filling. It was so thick it took some muscle to plough the spoon in and it stuck to the spoon after blissful after blissful mouthful. How can I not love a restaurant that does such wonders with chocolate! 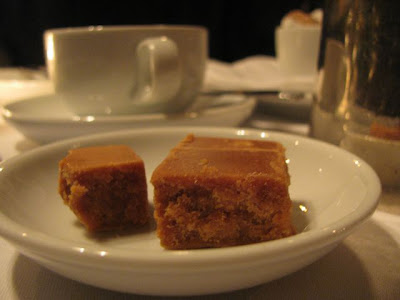 We finally had a cuppa to finish the meal. E had a latte and I had a peppermint tea. Tablet was served with tea and coffee. This is like Scottish fudge for those who don't know it: toothachingly sweet and sandy in texture. The Witchery's tablet was excellent: intensely sweet but soft and caramelly. So different and superior to the hard pale stuff you can buy in a plastic packet from a corner store. 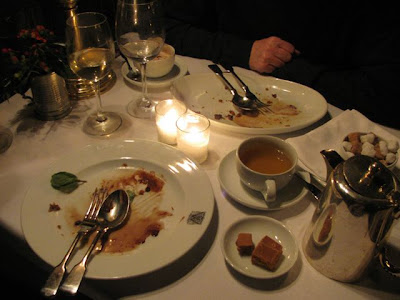 At the end of the meal I was full as a state school and oh so satisfied. It was such a pleasure to enjoy a delicious meal in such gorgeously grand and historic surroundings. Not for everyday meals but this is definitely the place for a special occasion. 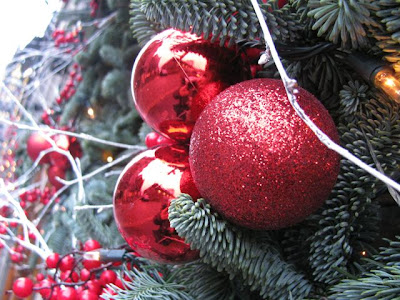 We emerging from the gloom back onto the Royal Mile to go and pick up Sylvia. A big thanks to HH for babysitting and a huge thanks to E's parents who thoughtfully gave us some money to spend for Christmas. This was a wonderful Christmas present.