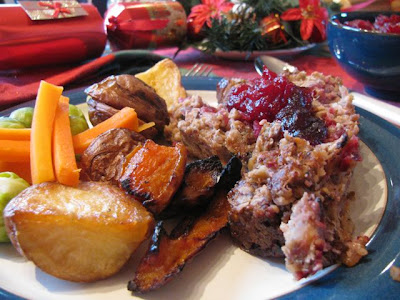 When we were planning this trip to Edinburgh, this time of year appealed because it meant that we were not only able to see the wonderful Christmas lights, but also we could have an early Christmas with E's family. When I was young we saw our grandparents, aunts, uncles and cousins for Christmas dinner on the days following Christmas and I always enjoyed the festivities stretching out over a few days. This year we will be having two Christmas dinners and I have no complaints. More nut roasts all round! 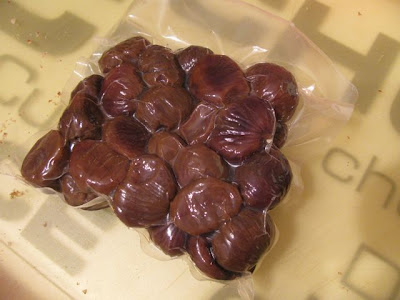 Our first Christmas dinner was held on our last weekend in Edinburgh, hosted by E's sister, HH. You will not be surprised to hear that I volunteered to bring a nut roast. Here was my chance to try the nut roast recipe in BBC Good Food Vegetarian Christmas special to make to justify the purchase of cooking magazines. I was excited that it had chestnuts and fresh cranberries, both ingredients that are hard to find in Australia. I have read so many bloggers writing about vacuum packed chestnuts that I had to buy some (Merchant Gourmet brand) while I had the chance, even if the first check out chick I asked in Sainsburies did not have a clue and waved vaguely in the direction of the fresh chestnuts. 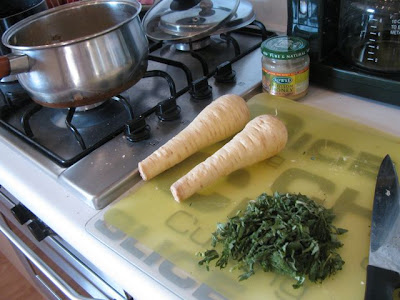 Now as an enthusiastic advocate of nut roasts (as evidenced by a link to my site from the Wikipedia nut roast page!) I would love to tell you this one is easy to whip up but I will not lie to you. (This is my easy nut roast.) I meant to make it the night before but I found myself tired at the end of another long day in Edinburgh and did not have the energy. 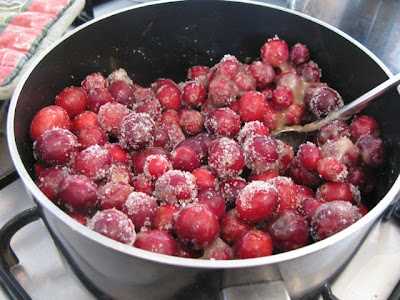 The Parsnip, Cranberry and Chestnut Roast that I made necessitated finely chopping chestnuts and walnuts (in the absence of grinding in a food processor), grating breadcrumbs (ditto), chopping sage, chopping and frying onions, cooking and mashing parsnips, and making a cranberry sauce before assembling the nut roast. I chose not to do the fiddly work of cutting slices of honeyed parsnip to top the loaf and I decided I preferred the parsnip mashed rather than cut in chunks in the loaf. 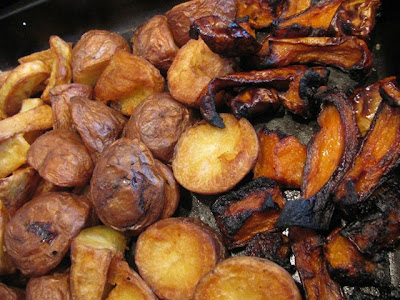 Fortunately I did summon up enough energy to start some of the preparation the night before. But many tasks faced me the next morning and I was glad that HH had decided to start dinner at 2pm. 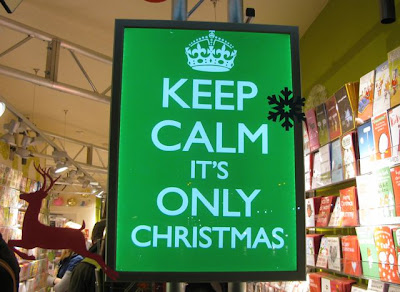 I managed to get the nut roast together with E's help with stirring the cranberries while I fed Sylvia. Unfortunately it meant I wasn't sure if it was too thick and added some water which in retrospect I think thinned it out too much and made it less visible in the nut roast slices. Then E had enough time to nip out to buy the Daily Mail for the free Christmas CD. I also roasted some potatoes and pumpkin while I was doing the nut roast. If I do say so myself, this is something I do rather well, having learnt it from my mother. 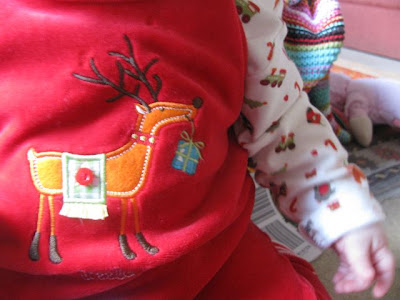 When the nut roast was done (after 45 minutes I decided it was close enough for jazz as E's father had arrived in the car to take us over to HH's place), we had the presents packed, Sylvia dressed in her Christmas outfit and were ready to go. Almost ready! First we had to wrap the nut roast and vegies in towels to keep them warm. If I had had time I had planned to decorate the nut roast with fresh cranberries and extra sage leaves but this was just wishful thinking in the end. 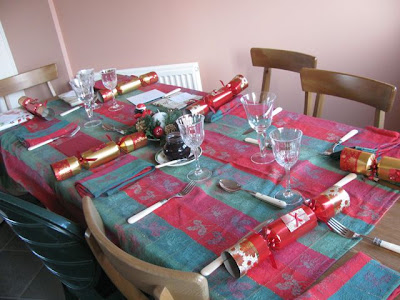 When we arrived at HH's place, she had the table set beautifully and everything under control. The turkey was warming and the carrots and sprouts were on the stovetop. We opened a bottle of champagne that had been given to us at Sylvia's christening. A glass of bubbly was just the thing as we waited for E's parents to arrive. 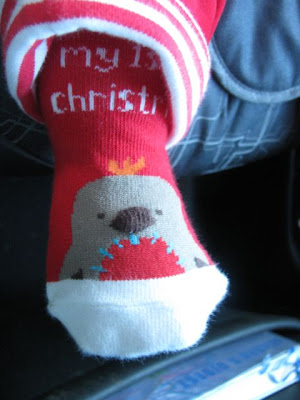 Now being able to celebrate Christmas together is always special in a family where members live on opposite sides of the earth but this one is extra special. It is the first Christmas for wee cousins, Sylvia and Florence. The UK shops have a great selection of children's Christmas clothes. Sylvia wore a santa's little helper overall and Florence wore a reindeer outfit. 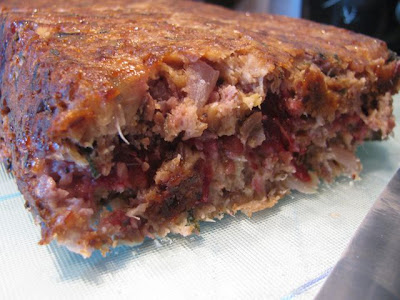 Soon we were all seated around the table with full plates. The nut roast went down well. In fact, I had expected that I would have quite a bit leftover but there was only a small slice left at the end of the dinner, and HH asked me for the recipe. It was quite a soft nut roast - I wondered if the watery cranberry sauce and the mashed parsnips made it softer than it might have been otherwise. Or maybe it was not cooked for long enough. But I enjoyed the cranberry filling and the actual roast was very tasty, seasoned enough to overcome the sweetness of chestnuts. 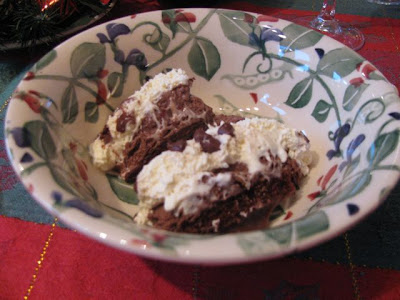 While my family traditions always include roast potatoes and pumpkin, E's family have different ones. Brussels sprouts are on the menu but E and his father are renowned for their complaints about them. Chipolatas usually make the plans for Christmas dinner but are often forgotten. HH didn't see the chipolatas in the fridge til later that night. Trifle is a traditional dessert. HH had earlier told me she didn't like fruit in trifle so I was neither surprised nor disappointed to see she had found a chocolate trifle for dessert. But not until the crackers were pulled. In my family the crackers are pulled before eating. However, there always needs to be a pause between courses and it made sense that this is when the crackers came out with a bang. Everyone wore silly hats and groaned as E's nephews had lots of fun reading the jokes. 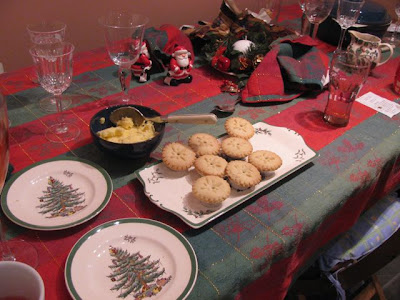 After the trifle, we opened the Christmas presents. The kids had a wonderful time with presents aplenty and it was great to see the looks on their faces instead of sending presents in the mail. We then relaxed with a cuppa and a mince tart. HH's brother-in-law and family came across from their nearby house for a chat and it was lovely to meet them. 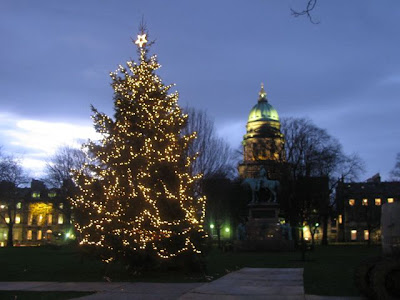 Christmas is not complete without a tree. It was a bit early for the tree to be up in the house so instead I will share with you a photo of a special Christmas tree in Charlotte Square. It is the Tree of Memories that is put up by the St Columba Hospice to remember those who cannot be with us at Christmas. Jacqueline and Lisa have asked for a festive photo for this month's No Croutons Required so I will send them this photo of the tree, if only for the novelty of being able to send a Christmas lights photo this year. 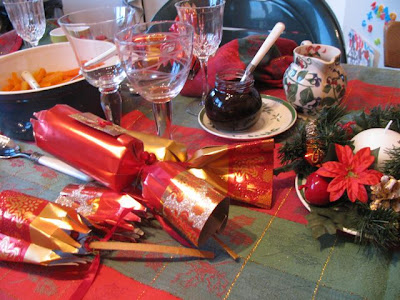 It was a wonderful meal and a great family get together with lots of photos, good food and fun. For us Aussies it was a treat to enjoy a rich festive meal in the cold of midwinter. We will remember our Scottish dinner fondly on Christmas day.

For the cranberry sauce:

Make the cranberry sauce first. Place cranberries, sugar and honey in a large saucepan and mix over a high heat, constantly stirring. The sugar will melt and the cranberries will pop. Cook for about 8-10 minutes, frequently stirring, until it is sticky (It shouldn't be too saucy at this stage or it will bleed into nut roast). The recipe said to cook but I found it was cool enough by the time the nut roast is ready to put in the loaf tin.

Melt the butter in a frypan and fry onions for about 10-15 minutes over medium heat until very soft and golden brown.

While the onions are frying, cook parsnips in a medium saucepan of boiling water for about 10 minutes or until soft. Mash with a fork or potato masher.

On the Stereo:
Three Tenors Christmas (freebie from the Daily Mail)
Posted by Johanna GGG at 10:08