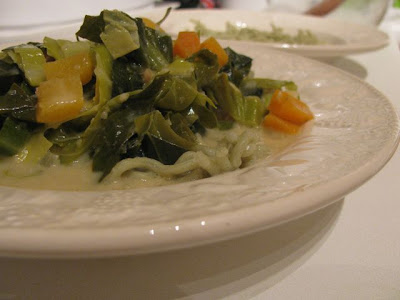 There is not a lot of cooking going on here right now. You will notice most posts focus on lunches, which we are mostly eating out. Evenings we often visit E’s folks and then get home and crack open a packet from Sainsburys supermarket. They do some wonderful vegetarian food. Spinach, Feta and Cherry Tomato Pie, Smoky Sweet Potato Soup, and Spinach Pakoras have all found their way into our trolley. But after too much eating other people’s food, I crave healthy home-cooked food. Last week I managed to find time make a smashing Spicy Cabbage and Coconut Soup. 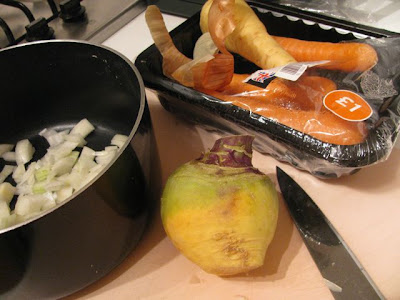 Root vegetables and cabbages were on special. I remembered Wendy’s Lemongrass and Cabbage Soup, which I have wanted to try for ages, and decided I could make my own makeshift version. Rather than using lemongrass, chilli, garlic, coriander and lime, I bought a stirfry sauce. I also had a bit of fun choosing some flavoured noodles that we wouldn’t normally find in a Melbourne supermarket. 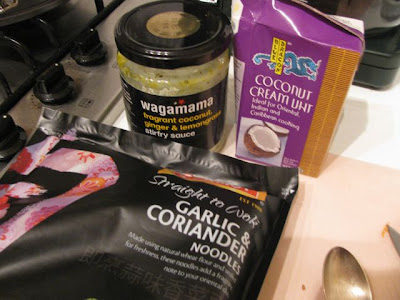 I have mentioned that my in-laws stocked up the pantry in our apartment. I was surprised to hear they had to buy me peanut butter. My surprise is not that peanut butter is seen as essential for me but that it is not essential for everyone. I added a few spoonfuls to the soup to add some flavour and protein. 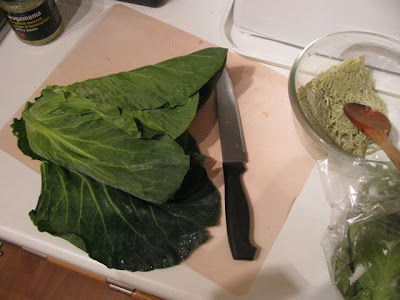 I loved the soup but E was not keen. It was spicy enough but too watery for him. I suspect there was also a bit much cabbage. Cabbage soup does not sound the most appetizing of meals but it was rather tasty with Asian-style spices and quite hearty with the addition of root vegetables and noodles. I was quite glad he didn’t like it much, so I could eat more of it. 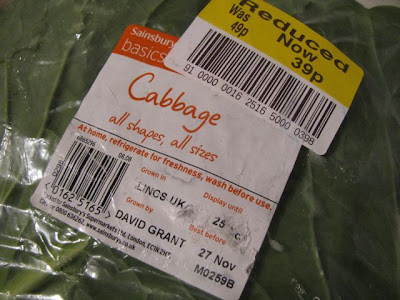 I always love wandering the aisles of a supermarket in a foreign country. One thing that amused and amazed me about the cabbage was that the grower’s name is on the label. I kept teasing E that I would tell David Grant that he was rude about his cabbage. It does make it quite personal, doesn’t it!

The soup seemed a good way of pepping up British vegetables. I have also horrified E by buying a “Brussels sprouts tree” from Sainsburys (grown by David Carr). It is the perfect way to have some greens on hand. 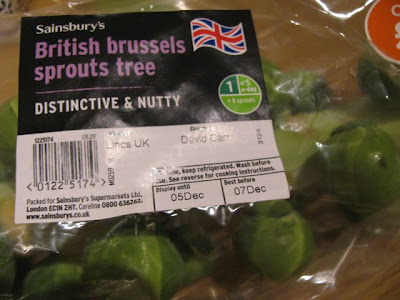 Greens and Scots don’t go together! (Apologies to Mr Carr!) On the other hand they love porridge. Sylvia who is half Scottish loves the baby porridge made of quinoa, millet, oats and spelt grains with banana and plum flavouring. Sounds quite fancy for a baby, doesn’t it! On the morning that I made the soup, we went to see E’s nephew Barney in his school assembly. There was gaelic singing, dancing and presentations on crofting families. When it was mentioned that they ate porridge, the little boy behind us shouted loudly, “I love porridge”. 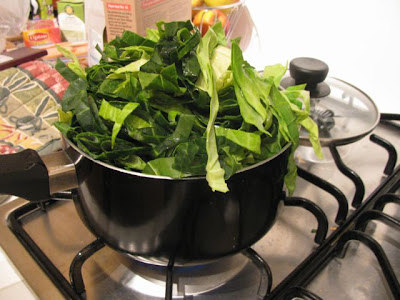 The Brits also do such lovely Christmas food. The weather here is so much more appropriate than in sunny Melbourne. We watched Delia’s Classic Christmas on BBC2 tonight. Despite her love of meat, I enjoyed the program with footage of a cat running around her country home in between seeing her freezer stuffed with food and Delia relaxing with a festive drink. I fancy trying the Cheese and Parsnip Roulade with Sage and Onion Stuffing (to be served with cranberry sauce) and the Chocolate and Sour Cherry Crumble. 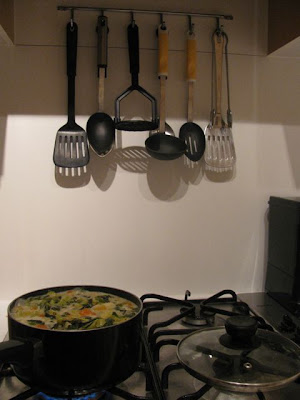 Lastly, I thought I would apologise that I am not able to visit other blogs at the moment. Although we have wireless broadband here, I know if I start looking at all the posts appearing on my blog reader I will get distracted and wish I could do cooking that is just not practical here. Besides, we have little enough time here. So during my holiday in Edinburgh, I have decided to just spend my blogging time trying to keep up with posting about the trip. When I get home I will catch up with all your posts. Meanwhile, here is what I did with my soup away from home.

Place onion, parsnip, turnip, carrots and salt in a large saucepan. Cover with water and bring to the boil. Leave while visiting in-laws and shopping at Cameron Toll. Pour in lemongrass sauce, bring to the boil and simmer for about 15 minutes while preparing cabbage. Add chopped cabbage to saucepan. Discover saucepan is so full that I wish I had my big stockpot at home but let it stew with the lid, prodding and poking occasionally, until it is wilted enough to stir soup. Add creamed coconut and peanut butter. Bring to boil and simmer for about 20-30 minutes while feeding baby and watching television. Divide noodles among four soup bowls. Pour soup over noodles and serve hot.

On the Stereo:
The Music of Ennio Morricone (free with the Sunday Times)