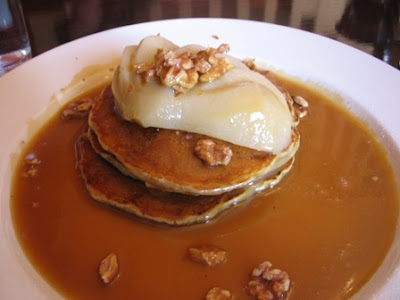 Spending a long time in one neighbourhood means you see cafes open and fold, your past comes back to haunt you and you get to know the best places to eat. Or so it seemed when E and I met fellow blogger AOF on the weekend in Rathdowne Village.

Having spent far longer around this area than I ever did, she can tell stories of the rise and fall of certain places. We were happy for her to recommend a café. She chose Black Ruby. When we arrived she was buried in a cup of coffee and the weekend paper at a chunky wooden table in 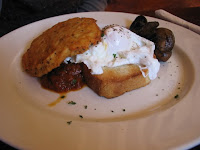 front of a disused fireplace. I warmed to the airy brightness of the place. Light poured in the large front window and reflected off the cream and red walls. It seemed surprising to me, given that the name suggested dark caverns.

The place was busy, but it didn’t seem cramped. I approve of a café that isn’t full of tiny tables which leave no room for the paper once a meal is served. When our brunch came on large white plates, we could have easily had room to spread out a broadsheet.

The menu offered lots of interesting veggie choices. E played the stereotypical Scot and ordered porridge with berries and apples. He was most pleased with its creaminess and happy not to have too much fruit. AOF had a fine looking plate of hash browns, poached egg, mushrooms and relish. It all seemed so healthy. But I took a risk and indulged in pancakes.

My coconut pancakes were served with pears, walnuts and toffee sauce. The stack was swimming in the thick sticky sweet sauce. I enjoyed the addition of desiccated coconut which made the pancakes more substantial than the usual fluffy offerings. The pears and walnuts 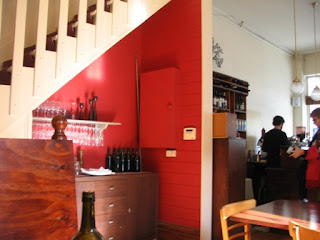 offered an interesting and refreshing contrast to richness of the sauce. Delicious but decadent. I probably could have done with more fruit and less sauce. Would I order it again? Probably not. Am I glad I tried it? Definitely. Next time I would like to try the vegetarian big breakfast despite AOF’s reservations about the black bean sausages.

So yes, it seems that living locally does help AOF pick an excellent café. When we got talking, we discovered that staying in one place also means you are never far from old faces and places. In fact, we discovered that we had both lived in the same share house, but at different times. Isn’t the blogosphere a small world!

But I have to end this post on a sad, albeit esoteric, note. After brunch, E and I picked up a painting we have had framed and headed on up to the Melbourne Museum to see the Melbourne Story Exhibition. Afterwards I insisted we go to see in the giraffe in the menagerie of stuffed animals. But there was no giraffe. I thought I had seen him there, but the staff thought he hadn’t been on display since the museum moved to Carlton from Swanston Street some years ago. I am now hoping that one day my friend the giraffe will re-emerge to once more bring joy to many visitors.

Update 2012: My mum now goes to Black Ruby regularly to buy gluten free bread.  My celiac sister says it is the best GF bread she has tasted.