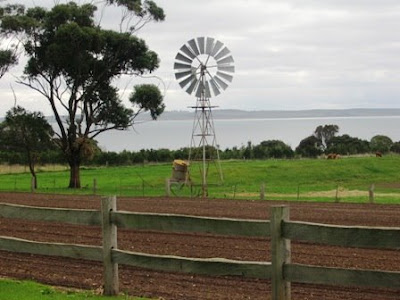 Philip Island is a magnet for lovers of wildlife and surf, and is easily reached in just a couple of hours drive from the hustle and bustle Melbourne. Apparently it gets overrun by tourists in the summer. If, like E and myself, you want some peace and quiet, I would highly recommend that you visit in winter, make sure you visit Churchill Island, take binoculars, and avoid the crowds viewing the famous fairy penguins.

We visited a couple of weekends ago and had a wonderfully relaxing time. Our B&B (Genesta in Steele Street, Cowes) was a nice old building but there were staffing issues due to the regular person not being available (matching pillow cases and how to work the stereo were challenges facing our host). I had a good breakfast of baked beans on toast with fried tomatoes and mushrooms each morning. 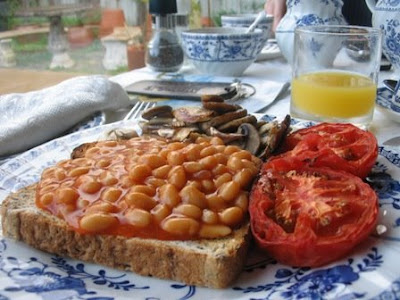 My favourite place was Churchill Island, a small island reached by a bridge off Philip Island, which has a heritage homestead and nature walks - see above photo. (My dad visited in the late 1960s when the last resident had lived there.) The homestead owner in the 1870s was Scottish and had Highland Cattle so we were able to see some mournful hairy coos that have been returned to the island. We had great fun walking about the homestead, feeding the chickens and the horses, patting Mary the lamb, talking to George the cockatoo, laughing at the galahs and walking around the island by the spooky Moonah trees. 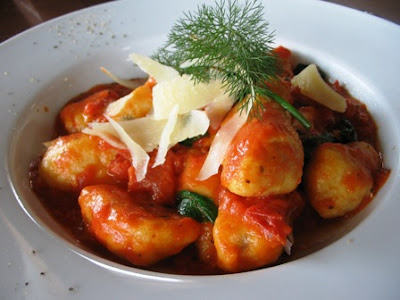 It will not be surprising to hear that one of my favourite meals of the trip was a pleasing plate of gnocchi at the Churchill Island Café (which is the only place to eat on the island). The café is filled with pale pine tables and chairs around a woodburning fire that gave out a very welcome warmth. In summer the seats outside would be preferable as the views down the paddocks to the sea were lovely. My pumpkin and potato gnocchi was served with a generous dollop of rich tomato sauce.

Other places we loved were the Koala Conservation Centre where we saw lots of koalas high in trees and the one in the photo which was only a couple of paces from us and looked so snuggly; Rhyll Inlet where we walked through the mangrove swamps on duckboards and then watched the bird in the bush; and the gorgeous sandy surf beach at Woollamai. 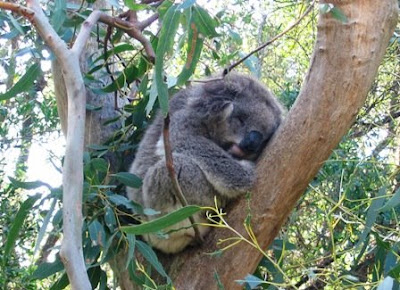 The holiday really was about getting away from the rat race but I was surprised not to find more gourmet food. Quite possibly there are other places we missed (for example the intriguing Pink Castle on Steele Street near our B&B which had a good write-up in our Lonely Planet but was never open.) But a cafe inside a real estate agent's is not where I would expect to find the finest food - we didn't go there but did marvel at the concept. It felt like I was living on chips, pasta and pizza. So when it was done well, I was grateful.

We went to Gullivers (Thompson Avenue, Cowes) a couple of times which had both a casual fish and chip shop and a proper restaurant. It was too cold to sit outside and the interior was pleasant with unadorned brick work, a fireplace, standard lamps and a large window for people-watching. Plus they did play enough Nouvelle Vague on the stereo for E to curse them for tempting him to run out and buy the CD. 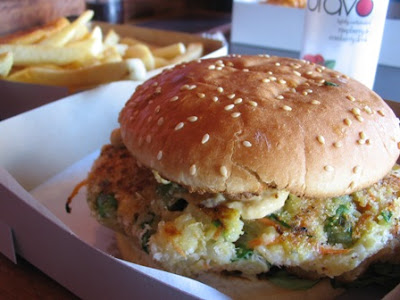 On our first day we had pikelets with jam and cream. ‘Oh just little pancakes,’ exclaimed E who is not familiar with pikelets! A couple of days later, I was pleased to be able to order a decent vegie burger, chips and a potato cake in a traditional fish and chip shop style. Again E doesn’t understand this type of place but it is where Catholic families like mine would head to on a Friday for some fish and chips wrapped in paper to take home to their families. His UK equivalent would be the chippie. I had enough of this sort of food as a child for it to be comforting, if not healthy, and to get excited where there is anything more than deep fried potatoes on offer for vegetarians.

A place that did pasta well was a place named Hotel (cnr Thompson Avenue and the Esplanade, Cowes). E thought it was decked out to attract the yoof crowd but the only other people there the night we visited was a family group. If only they would paint the black walls a warm or cheery colour it would be a welcoming space with its Ikea-style pine light shades and tables and chairs. They served quality pub grub. Basic food that was cooked and presented well. My vegetarian lasagne that was covered in melted cheese but full of vegetables. It was served with chips and salad and hugely superior to a lasagne stuffed with fetta cheese that I had had recently when eating out. 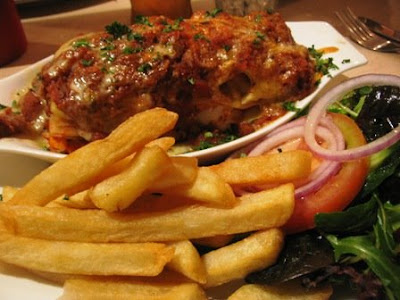 On our final night we went to Isola de Capri (cnr Thompson Avenue and the Esplanade, Cowes). By then I just needed some vegetables so I ordered pumpkin soup and steamed vegetables. It was delicious and so filling that I couldn’t fit in dessert. E had pizza which he said was excellent and seemed much better than pizza we had elsewhere. The staff were friendly, the restaurant bustling and it felt like it was run by an Italian family rather than teenagers on holiday. The grand prix memorabilia reminded us that this is one of the other attractions for visitors. I was glad of my warming meal after sitting in the cold waiting to see the famous penguins.

We felt we should see the fairy penguins but after walking through such peaceful natural settings with only a few other people about, we were most unimpressed to be suddenly thrust into a place crowded with busloads of tourists. Unlike other places, the humans easily outnumbered the wildlife. The little penguins are cute but there were just too many people and too much hype. My mum says she took me there when I was two and that we just sat on the beach. I wish I could remember that visit which wasn't a maze of ticket stalls, gift shops, tiered seating and duckboards. 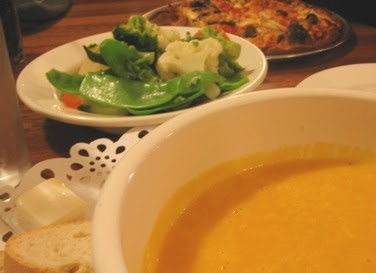 As well greats places to get close to wildlife, we did find some lovely gift shops, a trash and treasure of hidden gems, and an excellent health food store in Cowes. After finding it near impossible to find unsweetened dried cherries in Melbourne, I was surprised to discover a packet from a local source. A bridge from St Remo on the mainland makes Philip Island easily accessible. In the shadow of the bridge was a small shopping strip with more gift shops of beauty and curiosity.

It was here that we found one of the best meals of the holiday at Nude Food (141 Marine Parade, San Remo, 03 5678 5530). This was the sort of little hippie, arty, student café I thought we might have found on the island. It had purple walls with unframed local artwork and notices about musical evenings. The staff were friendly, the food was imaginative and alternative diets were well catered for. I had a vegetarian gluten free frittata with chickpea crust which was served with a salad garnished with nuts and seeds. I didn’t think that frittatas had crusts but am no expert. It was light and tasty. This meant I could finally have a proper dessert. I had a slice of the magnificent chocolate cheesecake. It looked a bit rustic but the chunky chocolate biscuit crust and a baked filling with hint of citrus were delicious. All washed down with a fruit smoothie called Nectar of the Gods which I think had peach, raspberry and banana. 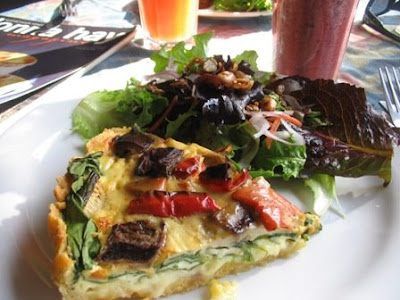 Then we headed homeward, stopping at Wicked Sensations (shop 6, number 1, High Street) in Cranbourne for a bite sized mini choc chip muffin drizzled in raspberry sauce for me and a small berry chocolate for E. After that we hit the freeway and drove til we arrived at the Cat Motel where Zinc was eagerly waiting to come home with us.
Posted by Johanna GGG at 00:05