Rabbiting on about Cheese and Rarebit! 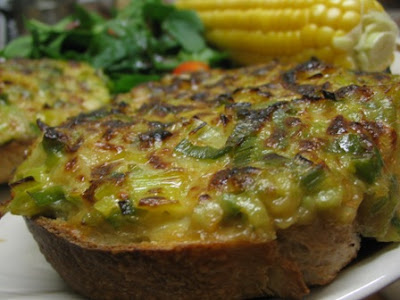 This quote was on a birthday card I received this year (thanks Chris). It gave me cause to wonder about if cheese really had been ignored in literature. Seems odd, given that our culture vultures enjoy nothing more than a night of cheese and wine.

Firstly my thoughts turned to humour. Some of my favourite moments in comedy have revolved around cheese. There is Monty Python in The Life of Brian with the Blessed are the Cheesemakers scene. (Incidentally, did you know there is a location near Jerusalem called the Valley of the Cheesemakers?) Monty Python also had the classic Cheese Shop sketch (which in 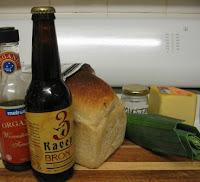 turn begot the name of a local subscriber radio comedy show in Melbourne). Who can forget Alan Partridge running around after a BBC executive yelling ‘Smell my cheese’? And then there were the silly cheesy peas skits on the Fast Show.

But what about literary appearances? Well a quick internet search shows that it wasn’t just the comedians commenting on cheese. The history of cheese dates back to around 8000 BC so it not hard to find mention of it in literature. Here are a few examples throughout history:

- c 1000 BCE: in the Bible, David escaped across the River Jordan he was fed with 'cheese of kine' (cows) (2 Samuel 17:29), and it is said that he presented ten cheeses to the captain of the army drawn up to do battle with Saul (1 Samuel 17:18).
- c 8th Century BCE: Homer in The Odyssey describes the Cyclops making and storing sheep's and goats' milk cheese
- 1st Century BCE: Virgil loved it and once wrote, ‘Yet this night you might have rested here with me o this green leafage. We have ripe apples, mealy chestnuts and a wealth of pressed cheese.’
- 1546: John Heywood wrote in Proverbes that "the moon is made of a greene cheese."
- 1602: In the Merry Wives of Windsor, Shakespeare wrote, ‘I will make an end to my dinner, there’s pippins and cheese to come’
- 19th Century: "Many's the long night I've dreamed of cheese -- toasted, mostly." Robert Louis Stevenson

If only GK Chesterton had access to the internet, he would never have made his claim. In searching for this, I was delighted to find that I shared my lifelong love of cheese on toast with Robert Louis Stevenson.

When I was little my mum often made it for us. We usually had it with tomato sauce on top of the cheese. I thought my mum was particularly sophisticated because she sometimes had the cheese 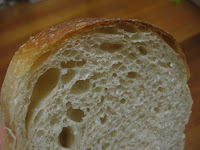 plain with just a bit of pepper on it. E and I still eat cheese on toast quite a lot for a quick lunch. It is something he excels at. He always has Tabasco on his and I like mine grilled a lot longer than his. When I am feeling fancy I sometimes have pesto, tomato, mushrooms, and spinach under the cheese. But on days lacking in energy, plain old cheese on toast gets us through.

Of course I would be too embarrassed to tell you how to melt some cheese on toast. That would be like telling my grandmother how to suck eggs! So today I thought I would share a fancy cheese on toast recipe which is now known as Welsh Rarebit. The origins of the name rarebit are full of humour, so it seemed appropriate for a post on cheese in literature and comedy. Rarebit was first recorded in 1725 and so we only have rumours and supposition about the origins of the name.

Some say the name came about because the Welsh were so poor that in Wales the poor man’s meat was cheese. It may have been a dish resorted to when rabbit was not available. Another story that amused me was that of Welsh wives waiting for their husbands to return from hunting rabbits. When they returned empty handed the melted cheese was had instead of the game. A more prosaic explanation is that hors d’oeuvre were sometimes known as forebits and the morsels at the end of the meal as rearbits.

My favourite description is by the American satirist Ambrose Bierce in his 1911 Devil's Dictionary: "RAREBIT n. A Welsh rabbit, in the speech of the humorless, who point out that it is not a rabbit. 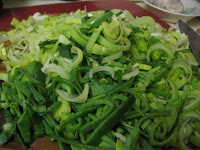 To whom it may be solemnly explained that the comestible known as toad in the hole is really not a toad."

I made Welsh Rarebit with Leeks last week after a trip to the market that yielded a fine loaf of Irrewarra sourdough bread and Watsonia Cheddar Cheese. The bread has a shiny crust and is so sturdy that you can carry it around under a bag of apples and it wont even dent. The cheese is so creamy that it melts onto the grater and it has a wonderful bite. I also bought a lovely local bronze beer called Three Ravens which is brewed in Thornbury (Melbourne). Only the best for rarebit.

The recipe I have was taken from Delicious magazine some years ago. The leeks don’t seem to be traditional. But their addition seems appropriately Welsh and also lightens the heavy cheese sauce. The intense gloopy sauce needs a good firm bread to soak into or you could end up with something like bread and butter pudding. Even with leeks, it is so rich that you really do need some salad or vegetables on the side. And for those who like a little heat, the English mustard really does give it some kick. This is great quick comforting winter food.

Welsh Rarebit with Leeks
(from Delicious Magazine)
Serves 4 as a light meal, or 2 for a very filling meal

Finely slice leeks (including some of the green part). Melt butter and cook leeks over medium heat for 5 minutes or til soft and wilted (mine took longer). Set aside.

Lightly toast bread on both sides in grill or toaster.

Add remainder of ingredients to the saucepan of leeks. Only add 2 tbsp of beer initially and then add an extra tbsp if needed. The cheese sauce should be of a gloopy consistency.

Divide sauce between pieces of toast and spread to cover each piece. Place under the grill for two minutes or until scorched, hot and melting. I served ours with a green salad and corn on the cob.

On the stereo:
The Singles: Suede
Posted by Johanna GGG at 21:47