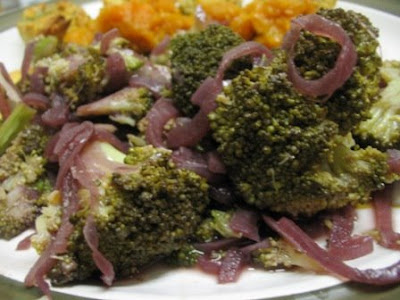 Food is so integral to our lives that it is easy to not even notice it. A self-confessed bibliophile, I find it difficult to rise to the challenge of cooking something relating to the literary world because I often don’t remember the food.

But when I saw that Simona of Briciole and Lisa of Champaign Taste are holding the Novel Food event again this month, I kept thinking about a moment in a novel I read some months ago, a moment that illustrated just what it is about literary food that makes it so easy to overlook.

The book is the Memory Keeper’s Daughter by Kim Edwards. It is a beautifully written novel that tells the story of twins being born in 1964. The father, David, a doctor who delivers the twins, sees that his daughter has Down’s Syndrome and asks his nurse to take her to a home. Instead the nurse takes her to another town to raise as her own. David tells his wife, Nora, that their daughter has died.

Early in the novel, the sorrow of the mother’s loss has an impact on the relationship with her husband and her surviving son. The joy of new life and the depths of her grief are tangled up in confusion that means that nothing can be straightforward any more:

She kept on driving on the same narrow rainy streets, back to their old house, where she had decorated the nursery with such innocent hope, where she’d sat nursing Paul in the dark. She and David had agreed about the wisdom of moving away, but the truth was she could not bear the idea of selling this place. She still went there almost every day. Whatever life her daughter had known, whatever Nora had experienced of her daughter, had happened in that house. (p 83)

On their wedding anniversary, Nora cooks David his favourite meal but he gets caught up at work and is late home. She has organized for her sister to babysit and finds herself alone in the house, waiting to serve dinner that is growing cold and drying out:

It was after eight o’clock. The world had softened at the edges. She went back to the kitchen and stood at the stove, picking at the dried pork. She ate one of the potatoes straight from the pan, smashing it into the drippings with her fork. The broccoli cheese dish had curdled and was beginning to dry. (p 80)

The abandoned dinner has more meaning that just an empty stomach. It is not enough to just eat it. Nora is waiting to share it with her husband because the meal was made in search of romance and connection. To fail to arrive home for dinner shows a disregard for the woman’s c 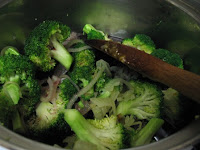 ooking, her homemaking and her love. The food symbolises a hunger for attention and love. But it is the minute details of what she is eating that makes Nora seems real to the reader because it helps to create such a vivid picture of a moment in time.

As a vegetarian, I wouldn’t cook a traditional roast pork dinner but I was struck by the broccoli cheese and decided I would cook this for the event. However I have already posted about cauliflower cheese which is a standard side dish from my childhood. I wanted something a bit different to a cheese sauce poured over broccoli. After browsing some cookbooks, the options were broccoli with breadcrumbs and brie, broccoli cooked with a sauce made from a campbells’ soup and a Sicilian drowned broccoli. The last one piqued my interest.

I found it on a website called FX Cuisine.Com that had some interesting dishes. This one is from Catania in Sicily where it is called broccoli affogati, which translates as drowned broccoli. The broccoli is drowned in red wine. I was particularly delighted with the onions in the dish that turn a pleasing purple.

My version was a little lacking in seasoning. Fortunately I served it with some pumpkin chutney that perked it up but I have added a little sugar in the recipe to compensate. When I re-read the comments I noticed some discussion on how different type of wine affected the taste

I would recommend this as an interesting way to eat broccoli. I suspect that Nora would have found it an exotic dish. But as in many of the older recipes I have encountered in looking at historic cookbooks recently, this is a traditional recipe with measurements that should be altered to suit each person. I suspect Nora would have understood this. After all, one of the messages of the Memory Keeper’s Daughter is that each individual is different. We all react to sorrow and hardship differently and similarly we find strength in different ways to help us cope.

Heat oil in a medium saucepan and fry onions until soft but not brown. Add broccoli and stir one minute. Add water and bring to boil (I think this is what ‘ebullition’ means). Add wine and bring to boil. Cover and simmer about 15 minutes or til broccoli is just tender. Remove from the heat. Add cheese and toss with broccoli til cheese is just melting. Taste and add some sugar or more salty cheese as required. Serve as light meal with good toast, or as side dish or over pasta or crepes.

On the Stereo:
Scavenger: Walkabouts
Posted by Johanna GGG at 20:22