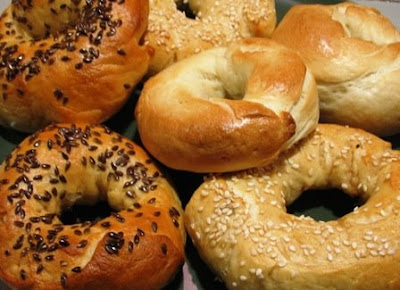 What do you do upon returning from a trip to New York? Go iceskating and bake bagels, of course! That is what my friend Yarrow did after his recent trip. I have decided that ice-skating is hazardous to my health so I took the option of baking bagels with him.

Yaz is a proficient bread baker – he has impressed me with his sourdough breads, but he had never made bagels before. Nor had I. The idea of boiling dough had never enthused me – seemed too much like soggy bread – but I do love a nice chewy bagel.

My lingering memory of how much I loved the bagels in New York, is actually of the moment we returned to London afterwards and I naively thought I would have a bagel. They looked just the same but lacked the jaw-aching chewiness and the cream cheese lacked the wonderful smoothness I had found in the Big Apple.

Funny, to remember how good they were by how bad they can be elsewhere. But I do remember the trip well. E and I had a week there, staying in a grungy hotel in St Mark’s Place in the East Village and spending many hours browsing through CD stores, book stores and Dean and DeLuca. Wandering around Manhattan, we took in many iconic sights: Central Park, the 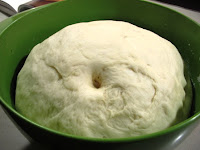 Empire State Building, the Staten Island Ferry, and Union Station. We had dinner with attitude at DoJos Cafe after a recommendation by a kind stranger on the subway, we saw Chastity Bono read from her new book and I learnt about chili in America the hard way.

Strange to think about our younger selves in New York. My UK working holiday visa had just expired and we were not quite sure what lay ahead. After the trip he headed back to Edinburgh and I flew to Melbourne. We didn’t see each other again for 9 months. So I appreciated spending those precious moment with E but there were other things we didn’t appreciate at the time: Soho galleries, the Twin Towers and bagels.

If I lived in New York, I would eat more bagels but good ones aren’t so common in Melbourne, especially on my side of town. Bagels, when done well, are surely one of the most wonderful ways to eat bread. But the idea of making them was intimidating. I felt even more unsure when Yaz read aloud the stern advice of Izzy Cohen from one of his artisan baking books: use high gluten flour, don’t boil them too long, and shape them from a rope of dough (the diagram being more confusing than illuminating). Other comments I have seen since baking the bagels is that proper 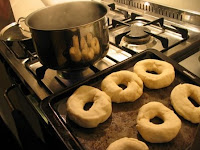 bagels should sink to the bottom of the saucepan and then rise when boiling them, and that they should be made in a wood oven.

We decided to use a Nigella recipe from How to Be a Domestic Goddess. Her instructions are always forgiving. The recipe based on a Jewish recipe, used a lot more flour than many that I have seen. I have noticed that she puts sugar in the bagels and some other recipes suggest malt syrup in the bagels as well as in the boiling water. There are lots of online recipes and commentaries (some good places to start are All Things Edible, Pixie, about.com).

It is fun to try something a bit tricky with a friend. I’d particularly recommend making bagels with others if you are kneading by hand because it is a very stiff dough. I was glad to share the kneading. Yaz was able to produce a tin of malt extract from the back of his cupboards. I’ve never had the stuff so was curious. It is a dark thick syrup a bit like treacle or molasses and apparently adding it to the boiling water gives the bagels their shiny sweet crust. We did some bagels without the malt extract and they were still quite shiny. Nigella also recommended using two spatulas to handle the bagels in the water but we found a slotted spoon was much easier. We 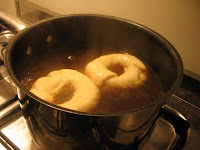 experimented with boiling bagels for different amounts of time and found that it didn’t make too much of a difference if they were in a little longer than Izzy Cohen says.

Another challenge was shaping the bagels. It had never occurred to me that this might be difficult. There were two ways that the recipes we consulted suggested. One was to roll the dough into a rope and overlap it at the ends. The other was to make a round disk and put your thumb through the middle of it to make a hole. The rope method produced smoother circles but some of these came apart and made incomplete circles (but we thought some water helped seal the ends so they would stick together). The thumb method was easier but the circles were lumpier. However once we put seeds on the bagels, the lumpiness was barely noticeable, so it wasn’t a big problem.

While the bagels were rising, Yaz whipped up a batch of chocolate honey muffins. They were excellent and moist. His partner Mindy exclaimed they were so good that they could be her dinner. I agreed with her. Sometime I will get this recipe and share it.

Once the bagels came out of the oven, we tasted them the traditional New York way – with 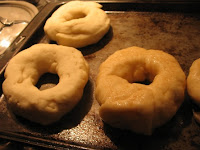 cream cheese – and our traditional Aussie way – with promite. They were very good. We didn’t use a high gluten flour and felt they weren’t quite as dense as they should have been. But the crust was lovely and chewy. They also were a lot smaller than bagels I have bought but I think this is a good thing as they are so dense that a little goes a long way.

I took some home and E told me they were quite light – it was meant to be a compliment but didn’t make me feel I had made the sturdy bagels we intended. Ours only lasted a couple of days but they did actually get heavier over those days without drying out.

I hope I will be making bagels again. It will be interesting to see what difference it makes to use a high gluten flour. Next time I wont feel so intimidated. Now I have made them once, they don’t seem so difficult. And homemade bagels do tend to make me feel like a domestic goddess!

Bagels
(from How to Be a Domestic Goddess)
Makes 16

For poaching:
2 tbsp malt syrup (or sugar or honey)

Put a little of the water in a large bowl with the yeast, sugar and a handful of flour. Leave for 5-10 minutes until it starts to get foamy. (Nigella doesn’t do this but Yaz thought it would help the yeast along). Add remaining flour, water and oil. Mix to a dough with a wooden spoon and tip out onto a floured board.

Knead by hand (or with a dough hook) trying to add more flour if you can. This dough will be dry and quite stiff. Knead for 10-15 minutes or until smooth. Place dough in an oiled bowl and turn to coat dough with oil. Cover with a damp teatowel (or clingwrap) and place in a warm place for about an hour. When you can poke your finger in the dough and the impression remains it is well risen.

Punch down the dough and knead briefly. Divide into four pieces and then divide each piece into four so you have 16 small balls of dough. Either roll each ball into a rope and join with some water to seal to make rings or roll into disks and put your thumb through the middle to make a good sized hole (allowing for hole to decrease when the dough rises). Place rings on baking sheets and cover. Leave in a warm place to rise for about 20 minutes.

While the dough is rising, boil water in a large saucepan and add the malt syrup. Preheat the oven to 240 C. When bagels are risen, drop a few at a time into the boiling syrup water. Apparently they should sink to the bottom and rise. Boil for 15 -60 seconds per side (depending on whom you read). Use a slotted spoon (or two spatulas) to turn over and then take out and place on oiled baking tray. They will look a little puffy and soggy. Sprinkle with seeds of choice if desired.

Bake in the oven for 10-15 minutes til shiny and golden brown. Great with cream cheese, promite, for breakfast, with soup and I am told they can be frozen if not needed within a few days.

On the stereo:
Wide Open Spaces: Dixie Chicks
Posted by Johanna GGG at 13:31