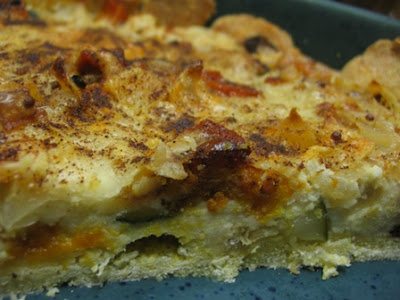 Making proper pastry makes me wonder why go through all the bother of waiting about for pastry to chill, rolling it out and baking blind. I grumble and groan until I taste it and remember exactly why it is worth the effort.

But what do I call the egg, milk and vegetable filling in a pastry crust. I grew up calling them quiches so I had a look at the internet to check. Food Reference tells me that the French word ‘quiche’ comes from the German word ‘kuchen’ which translates as ‘cake’ in English. Apparently quiches come from the medieval kingdom of Lothringen in Germany. Which sounds terribly romantic. Less romantic is the 'flan' which according to Wikipedia was used in Britain instead of quiche until the 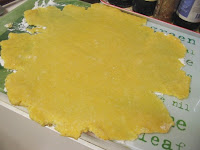 The names are confusing. And the taste can be too rich and eggy for my liking or good health. I am not against traditional pastry quiches altogether but sometimes I need some gentle persuasion. The prod I needed came from Judith at Shortcut to Mushrooms who is holding an event called a Vegetarian Feast in a Quiche. She has asked us to make something flat and savoury with a crust. There are many crusts which allow me to avoid the pain of pastry – the rubbing, rolling and blind-baking. But I had a yen to make the real thing.

I have a recipe for a quiche with a cheesy cornmeal crust that I have made a few times and remember fondly. The cornmeal gives it a pleasing grittiness and the parmesan adds heaps of flavour. I decided to use what was in my kitchen rather than buy exactly the right ingredients. 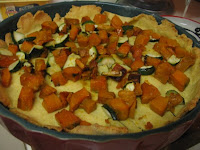 So I ended up substituting cream, lemon juice and wine for sour cream. Instead of fried pepper, mushrooms and pinenuts, I used roasted pumpkin and zucchini. I even used some excellent gruyere cheese for extra flavour. Giving it my personal stamp made me feel a bit better about not remembering where I found the recipe many years ago.

It worked a treat. I did find that my large rolling pin was missing, my ‘pastry board’ is smaller than it should be and my flan dish is larger than it should be. So my pastry was an odd shape and didn’t fit so well. Although less uniform around the edges, I prefer a very thin layer of quiche rather than a big eggy wedge. Still not health food. But tastes excellent whatever you want to call it.

First prepare the vegetables by roasting pumpkin and zucchini (with a spray of olive oil) in 220 C oven for about 40 minutes or until soft when you poke a fork through a piece.

While vegetables are roasting, make the pastry. Place flour, cornmeal and parmesan into a large bowl and rub the butter through until it resembles coarse breadcrumbs. Add egg yolk and enough water for the dough to cling together (I used about one eighth of a cup). Knead gently to make a smooth ball and wrap in plastic clingwrap. Refridgerate for 30 minutes.

Once pastry has chilled, roll out on a floured board. Place in a greased flan dish. The recipe says 23cm diameter but I used my 27 cm flan dish. Place a piece of baking paper over the pastry and fill with rice or beans (bake blind). Bake in oven for 15 minutes at 190 C. Remove beans or rice, using the paper to take them out. Return pastry to the oven for 8 minutes at 180 C.

While pastry is baking, prepare the filling. Fry onions and garlic in butter or oil for 10-15 minutes over low heat or until soft and starting to caramelise. Use a fork to whisk together the eggs, cream, wine, lemon juice and mustard in a small bowl.

When pastry case is ready, scatter with pumpkin and zucchini, fried onions, and grated cheese. The pour the egg mixture over the vegetables and cheese. Dust with paprika. Bake at 180 C for about 30 minutes.

On the stereo:
Train Leaves at Eight: The Walkabouts
Posted by Johanna GGG at 19:37