Entertaining with Fritters and Smoothies 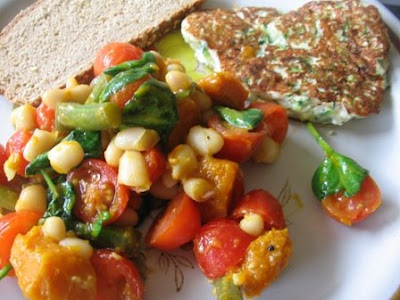 A holiday in the country, a new-found love of pomegranate juice, and leftover salad were my sources of inspiration when my sister Francesca and her husband Steve came for brunch on the weekend.

Blogging has made me relish the challenge of making interesting brunches on weekends. So I was delighted when Fran suggested brunch rather than dinner. I decided I would do a modern take on a fry-up. My fry-ups are really just distant cousins to the fatty plate of bacon, sausages and eggs to be found in greasy spoon cafes across the UK. Mine are healthier as I love my vegies but wouldn’t eat meat or fried eggs. Sunday’s ‘fry-up’ had what you might call traditional elements such as toasted bread, fried eggy fritters, beans and vegetables.

The zucchini fritters have been on my radar ever since we went to Beechworth last year and I found the recipe in a Donna Hay Magazine. I fancied trying a gluten-free version of fritters and 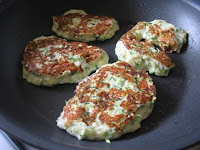 these piqued my interest. The only drawback (apart from not having any rice flour) was the egg whites. I had using half an egg and then trying to think what to do with the other half. I managed to use one to glaze the bread but I have three yolks threatening to become smelly monsters in the back of my fridge unless I get some brilliant ideas. Despite the egg whites (or maybe because of), the fritters were wonderful. They were light and fluffy and very tasty with the parmesan.

Ashley’s recent smoothie had put me in a mind to use pomegranate juice in a smoothie. It is only recently that I have found the right jug to make smoothies with my hand held blender and one of my favourites is berry and banana. I have made it before with strawberries and apple juice but found mixed berries and pomegranate juice made it much darker, but still creamy with the banana.

I have been buying pomegranate juice occasionally from our local shops. Last weekend when I sought out some rye flour for my Russian bread, I wished I lived south of the river where the 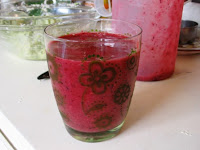 Eastern Europeans settled. But when it comes to buying pomegranate juice, I feel fortunate to live in the north in the midst of many Middle Eastern migrants. I bought 1 litre of pomegranate juice a few weeks back and it cost about $5. I started in horror at the price before remembering that it costs about that for a 250ml bottle of the stuff. Then this weekend I saw a litre being sold for $28. Not in my neighbourhood! I know it was organic but I was still staggered and felt my local deli’s pomegranate juice is a bargain.

The smoothie was a great gap filler. Fran and Steve walked in the door just as I was blending it. I felt like the hostess with the mostess being able to hand out smoothies, rather than having everyone starving while I got the fry up ready. Fran and I enjoyed the smoothie while the guys found a glassful was a bit much. It is a great way to get more fruit in your diet, especially if, like me, you don’t think to eat bananas and berries much by themselves.

We were all full after breakfast and relaxed on the sofa for a bit before Fran and Steve had to go on to lunch with some friends. They expected it would be a light one after that brunch. I was only too glad to stay at home to relax with some blogging, some baking and a bit of sudoku. I wished I still had some smoothie to slurp on but at least if I was hungry there was always plenty of the Oatmeal and Treacle Bread to enjoy.

Whisk the egg whites til frothy. Fold in zucchini, parmesan and soy flour. Season (I don’t think it needed much salt as the parmesan is quite salty). It is quite a thick mixture. Heat a little oil in a large non stick frypan. Drop and spread a couple of spoonfuls in frypan to create a 10cm diameter fritter and repeat to make another 2 or three. Fry for a couple of minutes each side or until golden brown. Serve hot.

On the stereo:
Legend and Lore: Dark Folklore and European Myths – Various Artists
Posted by Johanna GGG at 19:52