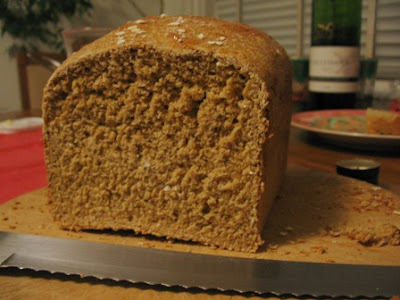 The weekend started with not a crust of bread to be found in our house and ended with an abundance. It was a rainy weekend that was perfect for baking bread. A weekend to stay in doors by the heater with bread dough rising. The sort of weekend when it is too wet to hang the washing outside, when the cars turn on their headlights in the middle of the day, and when it was inevitable that I couldn’t find the car keys as I stood in the supermarket carpark in the rain. 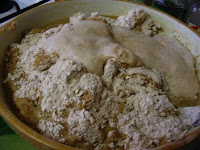 Yes, I headed out in the car in search of bread for lunch (and groceries) before starting baking. I finally spotted O’Hea’s Bakery in Coburg that Yaz recommended to me many months ago but there were too many roadworks and too few parking spots to make my way there in that rain. Next I headed to Smith Street in Fitzroy and found that one of my favourite bakeries (the one next to Gluttony) had a two for the price of one offer on their bread. When I got home with two loaves and flour for two more, I found that E had gone out. Knowing he would be thinking about lunch, I phoned his mobile and fortunately intercepted him en route to a local bakery.

Back at home I baked a Treacle and Oatmeal Bread from Entertaining with Cranks. This book is from the 1980s but feels older than that – it has pen and ink drawings and a sort of fusty wholesome goodness about it. As did the bread. It had quite a firm crumbly texture which 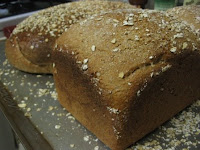 reminded me a bit of the wholemeal loaves my mother makes. The treacle and milk mixture was quite sweet but once mixed with the flour the dough is quite savoury. It was a little moist when fresh (see above photo) but fine when cooled. As with last week’s Russian Vegetable Bread, I have made notes below on how I baked it which varied slightly from the recipe.

It took a bit longer to rise than Cranks thought it might. It literally came out of the oven just as we were leaving for dinner at Will’s. He was delighted with the bread. It paired well with the thick creamy zucchini, potato and ricotta soup. Both bread and soup offered the hearty comfort we 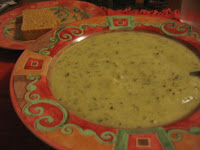 needed when coming in from the cold wet night. Will and E kept eating it with his amazing panir steaks which you can see served with my salad.

For sweets we had golden syrup dumplings with a surprise filling of melted chocolate in them – a most excellent addition to the dumplings. One of the most amusing moments of the evening was when Will’s boss rang him for the ingredients of a recipe and it happened she was making the same dessert as him. We did ponder if this was a condition of employment, but he explained that he had borrowed her cookbook and made a dessert that she had impressed him with before.

Will hosts a fine dinner party. I was happy to sit and talk with him about what he was cooking (eagerly eyeing his technique with the panir steaks) while E browsed the CD collection. When Will and I were housemates he could clear the kitchen with his collection of Prog Rock music. 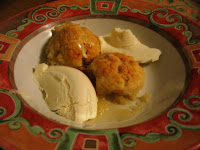 Now my dear partner has made me more appreciative of it but I still don’t share the enthusiasm of these two for discussing bands such as Tangerine Dream for hours on end. Unfortunately for them, I had to get home at a reasonable hour so we were up the next morning to enjoy the bread again with brunch.

After baking the bread, I saw that Melissa at A Sweet Life is hosting this month’s Bread Baking Day which is all about breakfast breads (deadline is 1 June). She is interested to hear about what our breakfast bread traditions are. When I was young I would have had vegemite, peanut butter, jam or honey on toasted bread quite like this one, so I am sending it her way. 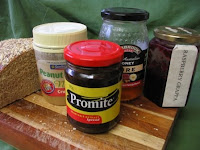 replacing vegemite in my affections). I did notice later that there is no butter in the picture and reflected that these days I am less likely to butter my bread first but it would have been mandatory when I was young. As you will see when I post about my brunch from this weekend, although I often still have toast (because I like a savoury breakfast), the toppings can be all manner of dips, cheeses, beans and vegetables. But the spreads pictured here still often feature on my toast in a quick weekday breakfast. This bread makes great toast so is very pleasing for breakfast with a scrape of promite or jam.

Combine the milk, treacle and butter in a medium saucepan over low heat until the butter has melted. Set aside to cool to lukewarm. (Mine took quite a while to cool down.)

Mix the yeast and sugar in a small bowl. Add the lukewarm water and mix. Leave it in a warm place until it becomes frothy. It suggests 10-20 minutes but I left mine 30 minutes because I was waiting for the milk mixture to cool. (The yeast mixture just kept growing which amazed me.)

Place flour, oats and salt in a large bowl. Add the lukewarm milk mixture and the yeast mixture. Stir to combine. (My milk mixture took so long that after about 20 minutes I stirred it through the flour mixture and it cooled down quickly so I could add the yeast without it being threatened by too much heat. The liquid on top of the dry ingredients filled my largest mixing bowl to the top so use a large bowl. I used a knife to stir it through because I think I have seen my mum do this – it doesn’t create so many waves that might spill over the edge.) The recipe suggests that if the dough is a little dry you should add more milk, but I didn’t.

After stirring with a knife, use your hands to mix to a coherent dough and knead on a lightly floured board for a few minutes til it is smooth. Return to an oiled bowl and cover with clingwrap. Rest in a warm place for 10 minutes. (I mean the dough but by all means take this opportunity to read the weekend paper, fit in some blogging or collapse on the couch.)

Knead on a lightly floured board for about 10 minutes or til smooth and elastic. Divide the dough into two halves with a sharp knife. Divide in half again and knead each ball til just smooth. Place two balls each in a greased loaf tin. (The recipe says a 900g tin - I thought my tin was smaller but the dough didn’t reach the top of the tin so am confused about sizes. I placed one of my loaves on a baking tray because I don’t have two largish tins.) Lightly brush tops with oil and cover with clingwrap.

Leave in a warm place to rise til doubled. (The recipe says til dough touches the tops of the tin which is not helpful if your dough is on a tray or you are not sure of the size of the tins. It says it should need about 40 minutes. I let mine rise for 60 minutes because it didn’t seem to have risen enough after 40 minutes.)

Brush the tops with egg, milk or water and sprinkle with oats or poppyseeds. Bake in the oven at 200 C for approximately 40 minutes or til it sounds hollow when tapped. Cool on a wire rack. (Or if you are heading out the door, wrap in a couple of teatowels and don’t be surprised if it is so soft it breaks in half.)

On the stereo:
Epsilon in Malaysian Pale: Edgar Froese
Posted by Johanna GGG at 23:02