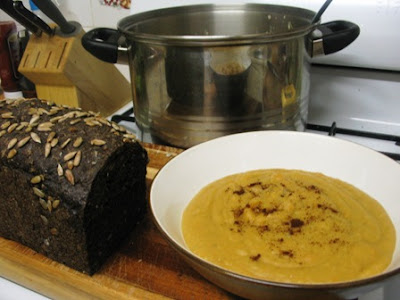 We went to see a medieval book exhibition on the weekend (as advertised on my tram ticket on the right). It made me think that, after my recent foray into vintage cookbooks, that it would be fun to make something appropriately historic for dinner. With no time for ‘research’, I took my inspiration from Lysy’s fascinating post on pease pudding which she says was a common 18th Century workhouse meal. It made me think of pea soup which seems to have a long line of 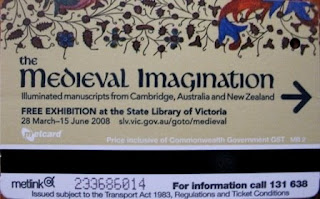 ancestors and is a childhood favourite of mine.

My mum often made us pea and ham soup is when I was young so it not just delicious but brings the comforts of nostalgia too. The version I make is meatless but I did check my notebook of recipes and found a recipe with bacon bones that I made many years ago before I was vegetarian. Every winter it seems to reappear on my menu in some guise. Recent successes with smoked paprika made me suspect this might impart the smoky flavour of pea and ham soup without resorting to faux meat. I was interested to see Haalo mention paprika flavouring her green split pea soup, so knew I was onto something good.

Planning on the run, rather than surrounded by cookbooks, I consulted a few Australian cookbooks in Myer department store while waiting for E to hunt down a novel he is after. Stephanie Alexander, Karen Martini and the Australian Women’s Weekly all gave recipes for pea and ham soup so it does seem well-loved by many Australians. As I like my pea soup thick, I used a bit more peas and less water than they did and of course omitted the ham bones.

Once I was full as a state school (is it just my family who used to say this?), I was interested to see if it really was a medieval soup so I checked the internet. Wikipedia told me that this soup 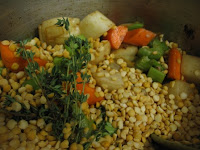 has indeed permeated our popular culture. Not only did Victorian Londoners compare their fogs to pea soup, but it has found its way into Tess of the D’Urbervilles, Star Trek and the Exorcist.

And according to Vegetarians in Paradise pea soup was indeed a medieval meal. In the Middle Ages dried peas were a staple of the European peasants because they were inexpensive, plentiful, filling and stored well. In many England and Scottish homes a large kettle of a thick porridge made of peas hung over the fire pretty much permanently. Each morning the fire would have died down and the porridge went cold. The fire would be rekindled, more peas and vegetables added and they started all over again. Makes a lot of sense of the rhyme ‘peas porridge hot, peas porridge cold, peas porridge in the pot nine days old’.

You might turn up your nose at nine days old pea soup but I have been told that as recently as in my grandmother’s generation, Australian women had permanent stockpots on their stoves into which they threw trimmings and scraps. I don’t think I would mind a constant source of pea soup, or stock (just like the magic pudding). But I am not sure I’d want a house that reeked of old pea soup.

As well as my pea soup being fresh, it also benefits from a hand held blender to puree it to a smooth consistency that our medieval ancestors probably never knew. I love this soft sludgy texture that reminds me of playing in the sandpit or at the sea as a child. Yes, I like it so thick 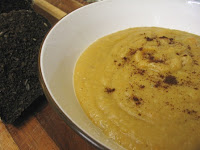 you could almost sculpt a sandcastle with it. But it tastes great too, particularly with smoked paprika.

To continue this mucky metaphor, when pea soup dries it really does seem like dirt as the surface hardens and cracks. It reminds me of a film we saw at primary school called Lost in the Bush about 3 children who get lost and keep walking looking for a familiar sight. They are found lying on a dried up lake that looks just like the surface of a cold stockpot of pea soup. The lesson of the film was that if you get lost while bushwalking you stay in the one place.

Enough lessons for today! I am sending this soup to Laurie of Mediterranean Cooking in Alaska for Weekend Herb Blogging which was founded by Kalyn of Kalyn’s Kitchen.

Heat oil in a large stockpot and fry onions and smoked paprika until onions start to soften. While onion fries, roughly chop and add vegetables. Add remaining ingredients. Bring to the boil and simmer covered for about an hour or til peas are cooked. (1½ - 2 hours seemed standard in cookbooks I consulted but one hour seemed enough for me.).

While soup is cooking, be sure to stir well occasionally to check the soup is not sticking to the bottom of the saucepan. If you want to get into the medieval frame of mind, towards the end of the cooking you can pretend to be St George fighting the fire breathing dragon as you use the saucepan lid like a shield to avoid being attacked by the burning spatters of soup.

When soup is cooked, remove bay leaves and thyme. Use a hand held blender to puree the soup til smooth. Season with salt and freshly ground black pepper. Serve hot with a sturdy bread (I had some dark sourdough rye from Rathdowne Street Food Store).

On the Stereo:
The Secret Life of: the Waterboys
Posted by Johanna GGG at 22:04