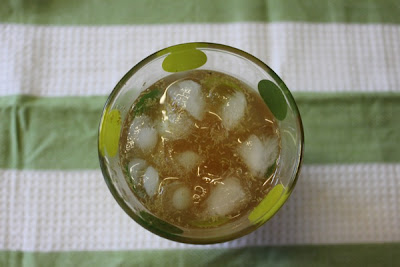 A couple of weekends back when it was sweltering hot, I had requests for treacle scones.  The spirit was willing but the flesh was wilting.  Instead I made a cool drink based on one that I had first encountered at a potluck last year.  K had brought along a chamomile lemon iced tea. 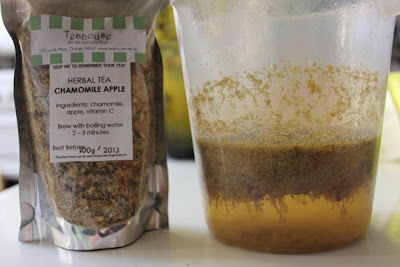 I had some chamomile apple tea so it seemed fitting to add some apple juice that I had in the fridge.  I drained all I could from a bottle of maple syrup (rather than making maple syrup ice cubes like K).  Next time if I am low on maple syrup, I might even try some honey, which is a more traditional partner of chamomile.

I found that the taste of the chamomile was rather strong after steeping the tea for 10 minutes.  Later I checked my packet and it said to steep it for 2-3 minutes, which I think I might try next time.  Lastly I added a generous handful of ice cubes and some soda water. 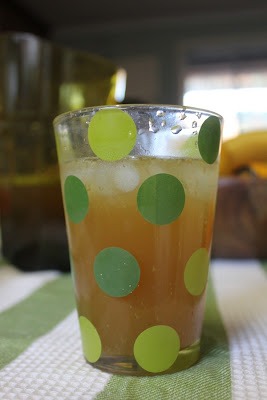 It was refreshingly cold and not too sweet.  E was not interested but Sylvia and I loved it.  We drank it while watching Mary Poppins.  I confess that I had hoped the chamomile might even help Sylvia sleep.  When I was a student I went through a phase of drinking lots of chamomile tea until I got so sleepy that it really wasn't helping me study.  No such luck with Sylvia.  She seems sturdily resistant to sleep lately.  Who can blame her on hot night!  At least the drink cooled us down!

I am sending this to Ricki for her Wellness Weekends.  I know she will appreciate me sharing a bit of summer!  Also thanks to everyone who sent in ideas on water bottles in my previous post.  I now need to spend a bit of time reading up on the different bottles.

Steep tea in boiling water for about 10 minutes (or according to packet).  Strain and discard tea leaves.  Add apple juice, lemon juice and maple syrup.  To serve, half fill a glass with the apple tea drink.  Add a handful of ice cubes and fill with soda water.

On the Stereo:
The versatile Martin Denny
Posted by Johanna GGG at 22:56