Malabar Hut - why it is our favourite Indian takeaway! 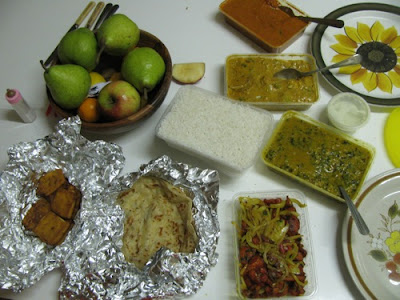 We are very particular about ordering takeaway Indian meals.  I want a good mix of vegetables and proteins.  E is fussy about his chicken curries.   Our yardstick is the Prince of India that we used to patronise when E's parents lived in Peebles.  We finally had an Indian meal so satisfying that we leaned back in satisfaction and said it measured up.  Malabar Hut was recommended by friends some time ago.  After a few Malabar meals, we are finally on the bandwagon. 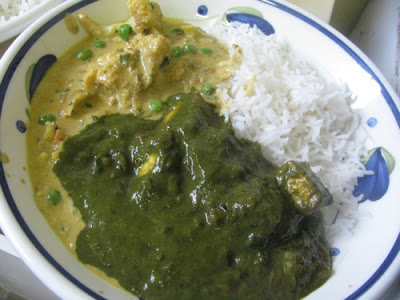 Our first order (because we have mostly had takeaway) was Gobi Mutter (cauliflower and pea curry) and Palak Paneer (spinach and cheese curry).  The gobi mutter was delicious.  It could have had a few more chunks of cauliflower but the sauce was mild and creamy and very very moreish.  Unfortunately the palak paneer was too salty, despite the wonderful silky spinach sauce.  It was promising but definitely not perfect. 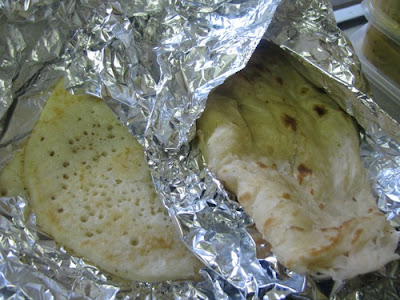 On that occasion we also ordered Chicken Dopiaza for E, which he enjoyed, Dosa for Sylvia who ate a bit, and Paratha.  The last is a flaky bread that was recommended to us by the Malabar Hut guy on the phone.  It was a good recommendation as it was flakier than the roti that we sometimes order at Indian takeaways. 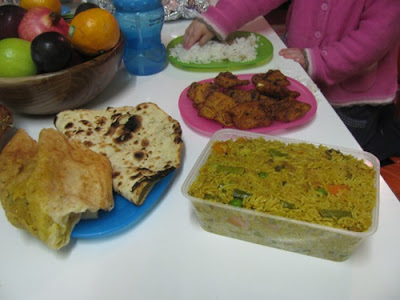 Our next order was on the anniversary of E's mother's death.  She had always loved a biryani so that is what we ordered.  I had the veg and E had the chicken.  The biryanis were disappointing.  They were edible but I didn't like the spice mixture, especially when I found myself crunching on a stray cardomom pod, and the spices were too hot for me.  E didn't like the bones in his chicken. 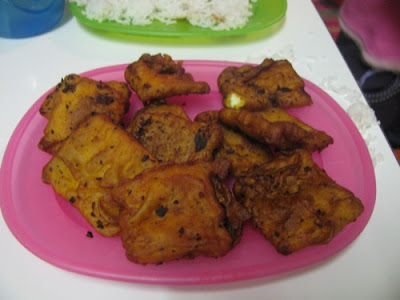 We also ordered masala dosa which was nice but too spicy for me and roti which was cold by the time we picked up our takeaway order.  The unexpected success was the Palak Paneer.  These deep fried squares of cheese with a chickpea flour batter weren't too spicy or tasty but had a slight taste of lemon in the batter.  The chewy crisp texture was excellent even when it had cooled down.  The dipping sauces, as is often the way with Indian takeaway, was too spicy for me but I was happy to eat the pakoras plain.  I had hoped Sylvia might eat them but she was far more interested in the rice. 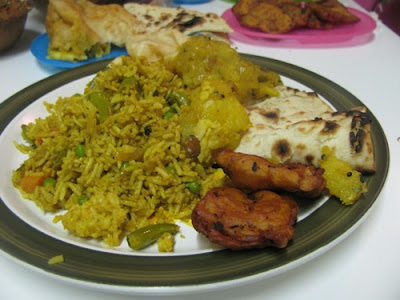 Finally I ate in at Malabar Hut with my friend Yaz on one of his visits to Melbourne last year.  He had invited quite a few friends along and we ended up with two tables.  One for the omnivores and one for the vegetarians.  This made it easy to share.  Even better was that Yaz and his friends Brian and Bruce were so familiar with the place and their knowledge helped me discover some new dishes.  I didn't take photos because I didn't know many people there.

Just watching their delight as the Gobi 65 was served was proof enough that it had to be sampled.  This starter of cauliflower deep fried in a bright red batter surrounded by fried onions was as good as the reactions of the people around me, despite being quite spicy.  We also ordered a paneer deep fried in a red batter (Rava Fried Cottage Cheese?), potato balls in a bright red sauce (that was amazing but I haven't managed to work out what it was), a creamy mushroom and pea curry (ok but a few too many mushrooms for me, though others loved it), a dal with lots of tomatoes (it didn't impress me because it was too much sauce and not enough lentils).  The service was good.  I was so full and satisfied by the end of the meal and it only cost $18 each (for 2 rice, 2 paratha, 1 dosa, 2 entrees, and 4 mains between about 6 or 7 of us). 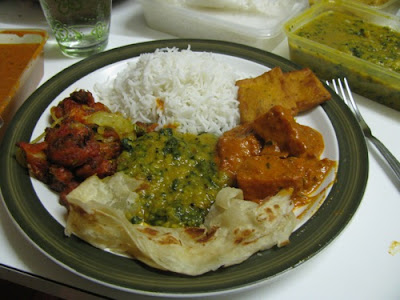 My last experience of Malabar Hut was a takeaway meal in July last year.  We ordered Gobi 65, Paneer Pakora, Dal Spinach (which was mustardy with lots of green specks), Dum Aloo Kashmiri (not the excellent potato dish of my last visit but the unnaturally bright red creamy tomato sauce with potato balls were nice), Chicken Dopiaza (boneless chicken in a creamy sauce for E), 2 Steamed Rice, and 1 Paratha.  It was an excellent selection.  I think it cost us about $50 and lasted two nights.  The only reason we haven't been back since is that we just don't have takeaway very often. 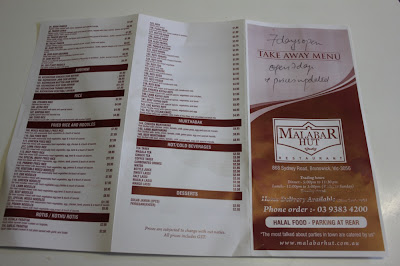 I can't think of Malabar Hut without thinking of Malibu Stacy from the Simpsons but I assume the name refers to a place in India (according to Wikipedia there are a few).  I have a copy of an old menu on which the guy serving me had crossed out the home delivery service.  Online, I found that the menu is slightly updated since we were there last.some changes. Though our experiences have been hit and miss, now that I have found some dishes to love, it is our go-to Indian takeaway and I highly recommend it to others.