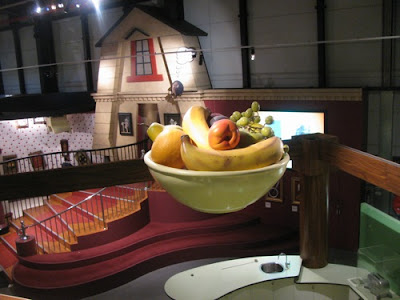 I love history and museums so it is a mystery why it took me so long to visit Scienceworks.  Sure I had been on the fringes of the museum.  I attended a conference there many years ago and once went to an avant-garde music performance at the Planetarium.  But I guess they don't count.  Finally late last year I took the time to wander through the museum with E, Sylvia and my dad.  It was both fun and fascinating. 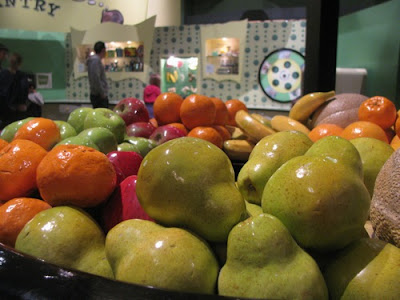 The museum is divided up into exhibitions.  We started off in House Secrets.  It was a fascinating mix of science and history, with a mock up of the kitchen upon entering.  There was lots of fun.  A bowl of fruit that people could stand in - great photo opportunity!  An upside down loungeroom.  One of my favourite exhibits was the microwave with a video where the door normally is.  You could select videos of all kinds of things that should never be in microwaves and see what happened when you put them in there. 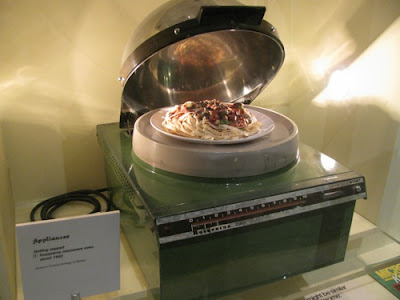 Even better was this "antique" microwave oven from circa 1960.  How cool is that!  I loved all the old kitchen jugs, cannisters, tupperware, teapots etc.  A great example of the mixture of science and history was the old Kelvinator fridge that you can open and find a video screen with information playing on it.  There were lots of interesting snippets of information, such as that the origin of teabags came from a tea merchant who packaged his tea in silk bags. 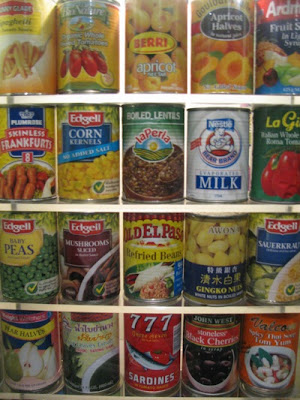 The exhibition also managed to take a mundane part of our life and make them fascinating.  This wall of cans makes the everyday into art.  Quite a few of these cans are in our pantry and I was tempted to go home and stack mine up just like this  The Secret House exhibition included other ordinary places in the home like behind the back of the couch, little drawers of what we keep in our bedroom cupboards, and a bathroom set up with information about how it all works. 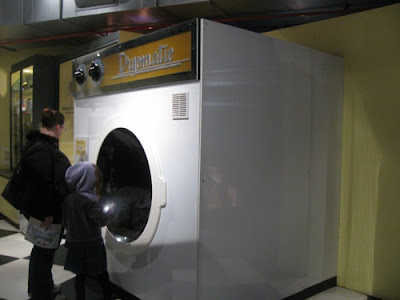 The exhibition was very clever in they way it made us see homelife with new eyes.  I loved the above giant dryer.  Everyone had to have a look.  One you were drawn in, you could then learn something about it.  Below is an old television that made me feel a little nostalgic for a time when the screen was plagued with snow and rolling pictures and there were no remote controls to help you out.  Reading about how household technology had developed was great.  Visiting with my dad who remembered lots of things we saw and Sylvia who just wanted to play with all the interactive exhibits demonstrated that there was indeed something for everyone. 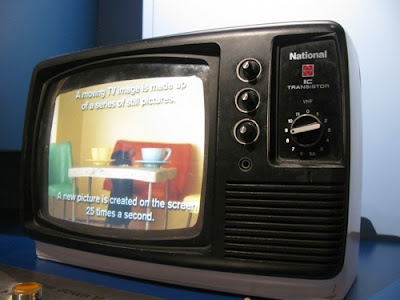 Much as I loved House Secrets, I concede that domestic history is not for everyone.  Apparently there are some who would prefer to see life-like dinosaurs wave their heads about and roar fiercely in the Explore-a-saurus Exhibition (which finishes in April).  Sylvia was not one of those.  They just made her cling to us.  I liked watching the dinosaur eggs hatching and the sandpit where you could seek fossils.  She was more interested in fake dinosaur poo. 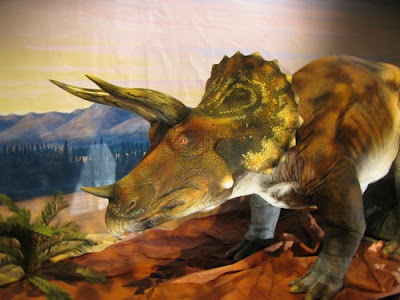 We found a few of the exhibitions (such as Perception Deception) too old for Sylvia and instead headed upstairs to The Nitty GrittySuper City.  This is an interactive exhibition aimed at 3 to 8 year olds.  Sylvia at 2 years old, found it entertaining.  First sight upon entering is the role play cafe.  A kiddie size cafe with sink, plastic food, coffee machine and tables and chairs.  Wouldn't I have loved this in our cubby hut when I was little!  Sylvia spent quite some time here. 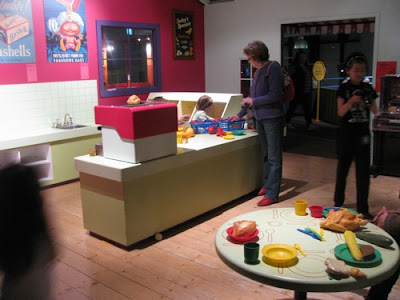 I loved how they managed to slip in some food history.  The walls of the cafe are decorated with 1960s supermarket posters.  That Kraft cheese one made me a little nostalgic though I would never have sanctioned tomato in my sandwiches as a kid. 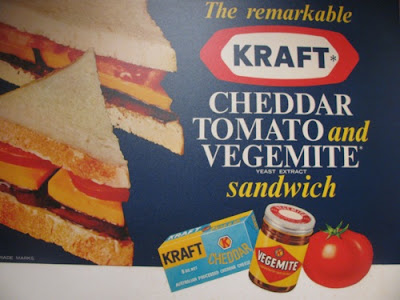 The area has lots of other activities.  The music bowl is lots of fun.  Lots of instruments to bang and tinkle and make noise with.  Other sections includ a pulley system that older kids seemed to love, some Australian animals, a log to crawl through, crazy mirrors, microscopes and a giant paper dolls section. 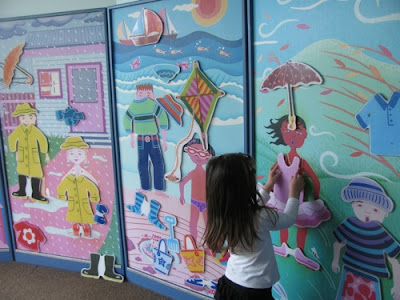 As with the rest of the museum, there are sections that adults just love.  The below lego model of Melbourne fascinated us.  My dad and I spent some time identifying familiar landmarks, places where we had worked, the Zoo, the Vic Market and the West Gate Bridge. 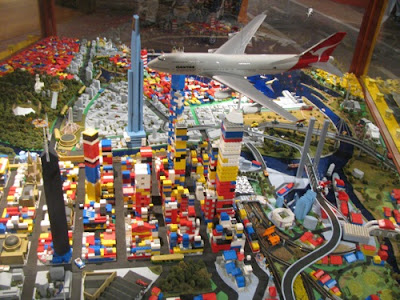 Midway through our visit we had to stop for lunch.  The cafe isn't anything to write home about.  It is a fairly bog-standard affair of pies, pasties, wraps, sandwiches, coffee and cakes.  I had the spinach and ricotta roll and a piece of carrot cake.  I gave Sylvia a piece of my cake and promptly took it away when I saw there were unspecified nuts sprinkled in the icing.  The staff were pretty vague about what nuts and so she didn't get any in case they were peanuts. 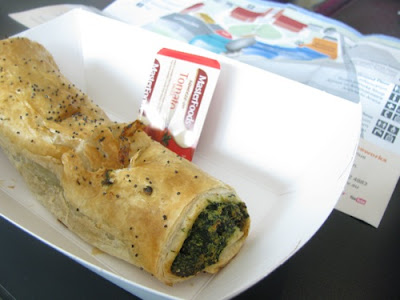 If the weather had been kinder I would have been in favour of taking along lunch to eat outside.  Out the back of the main museum is a huge expanse of grass with a few playgrounds and even a few more learning experiences.  What drew my eye and made me love the museum even more was the old pumping station.  I do so love an old historic building.  And industrial history is just so steampunk! 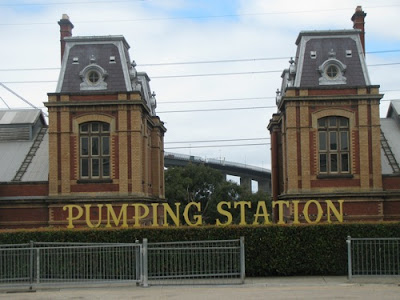 Before I take you inside, I must point out that Scienceworks has marvellous views of Melbourne's major bridge, the West Gate Bridge.  Can you see its curve between these two towers?  I still remember the bridge being built and travelling over it to visit my grandparents.  As a child who desperately wanted to fly in a plane, I loved the birds eye view of Melbourne, especially seeing the lights at night. 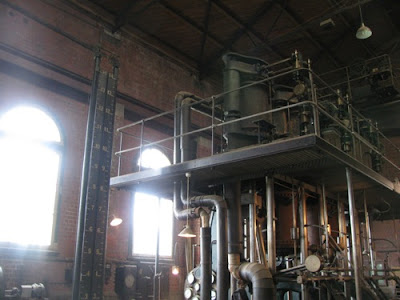 But onto the pumping station.  I loved all the exhibitions and there are more in the pumping station.  But museums, love them as I do, are tiring.  All the reading and pressing buttons and learning.  Old buildings are places to soak up the atmosphere and reflect on how much had happened in this space.  So much more restful.  Though I did talk to the guards a little about the history of this 1897 building that had pumped Melbourne's sewerage, it was wonderful to just sit in awe at the craftsmanship and technology. 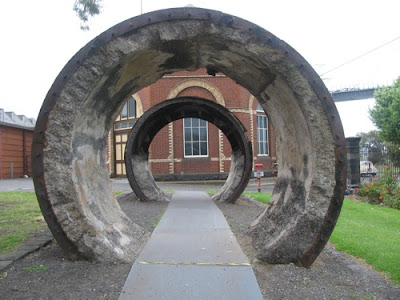 The day we visited it was busy.  However not as busy as the first time Sylvia and I attempted to go there only to be defeated by the queues.  It taught me an important lesson about booking tickets by phone or online if you want to avoid queues and not to go there on a public holiday just as new exhibition opens. Queues aside, Scienceworks is a fantastic museum and a great day out for all the family.