Lorne - beach, bush and eating out 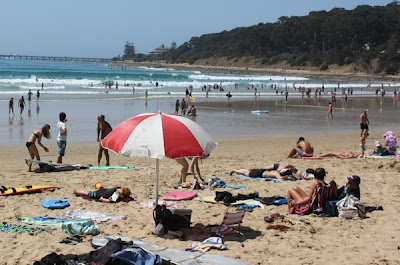 Lorne!  Ocean Waves!  Ice cream!  Cockatoos!  Sunburn!  Tree Ferns!  Fish and Chips!  Crowds!  BBQs!  Sun Hats!  Memories!  We spent some happy days in Lorne last week.  Not only is it a beautiful seaside town that backs onto a national park, but it makes me feel rather nostalgic.  I spent a lot of time there as a child.  My dad did a lot of work there and my aunt had a holiday house there.  So this post will be as indulgent as it is enthusiastic. 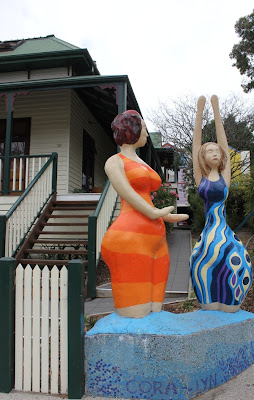 As you drive into Lorne from Melbourne, you will see these two ladies on the corner of the roundabout by the Tourist Information.  This signifies the Cora Lynn, where we had a holiday apartment.  It was a perfection location, within walking distance of everything in town. 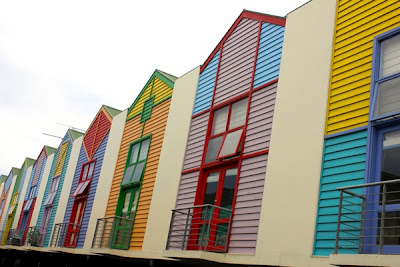 I loved the brightly coloured apartments which looked exactly as a seaside holiday house should.  Inside our apartment was compact but had all we needed (except a tv remote control).  The kitchen was well equipped and the bed was comfortable. 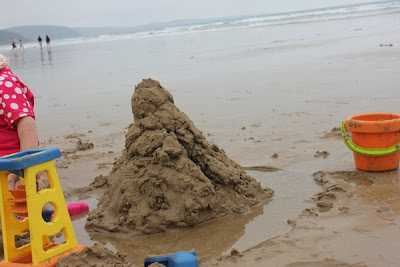 I was partly inspired to holiday by the beach, when I discovered that Sylvia didn't like the waves on the beach.  Time to play in the sand by the water seemed a good way to get to know the sea.  We had a few outings to the beach, mostly in the morning when it was overcast to minimise sunburn.  Both E and I loved the waves but Sylvia preferred making sandcastles. 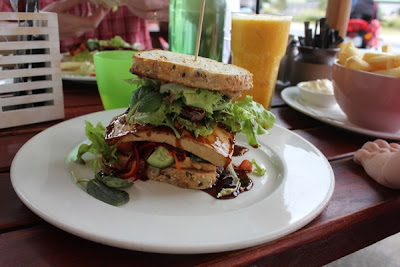 I had expected to eat out quite a bit but, as it was, we found it easier to eat in mostly.  But on our first day, we enjoyed lunch at Kafe Kaos (52 Mountjoy Parade, 03 5289 2639).  I ordered the Famous Tofu Burger.  I am always wary of such claims, but when I received my burger I was impressed that it was truly so famous that people were pointing at it as they passed by.  It consisted of a slab of Thai marinated tofu with peanut butter, sweet chilli sauce and lots of salad between two slabs of multigrain sourdough toast.  Delicious.  But too big to eat with your hands.  Sylvia loved her chippies and E was impressed with his BLAT, though he commented on how huge the servings were. 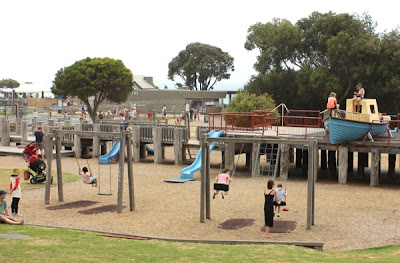 We enjoyed wandering among the shops until Sylvia was distracted by the park.  And no wonder.  This is a great set-up with lots of swings and slides, a wooden ramp to run along and a boat to play in.  There was no shortage of entertainment for kids.  As well as the park this area also includes a pool, a skate park, mini golf and trampolines.  (I don't remember the park being there when I was a kid but I always wanted to go on the trampolines.) While Sylvia wasn't terribly excited by the waves, she somehow got into her head that the beach meant ice cream.  The very word made her eyes light up.  We had a couple of visits to the Lick and Sip (Shop 4, 32 Mountjoy Parade, 03 5289 1193).  It boasted the best ice creams on the Surf Coast.  Our experience was patchy.  Some great and some could have been better. 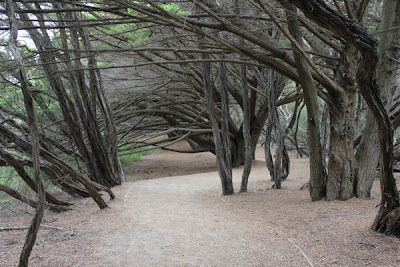 What I love about Lorne is that it is so much more than the beach.  When I was young I loved the Swing Bridge.  So one evening, I decided to take a walk along to check it out.  My walk took my through the caravan park and then through these spooky trees before coming out at the swing bridge and back along the edge of the Erskine River. 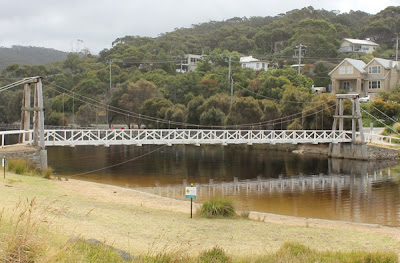 I remember swimming around the mouth of the river near the swing bridge as a child.  Apparently it was near my aunt's holiday house.  And it was always exciting to walk over the wobbly bridge.  Sylvia also loved it.  Unfortunately there are now lots of signs warning that it is not healthy to swim in the river.  Shame!  The mouth of the river was one of the warmest places to swim. 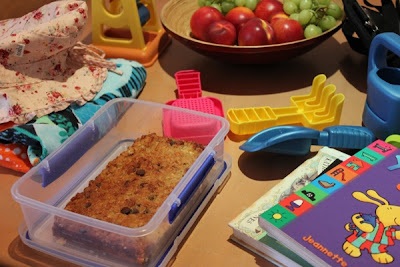 We took down quite a bit of food, and I have decided to write another post about our self-catering.  But I couldn't resist showing a wee taste.  Having our own food was brilliant when we headed out to the bush.  As a child I knew this area as Angahook Forest Park but according to Wikipedia, in 2004 it was merged with other parks to form the Great Otway National Park.  When we stopped at my parents' house en route to Lorne I checked with my dad which picnic area we had gone to regularly.  He told me it was Blanket Leaf Picnic Ground. 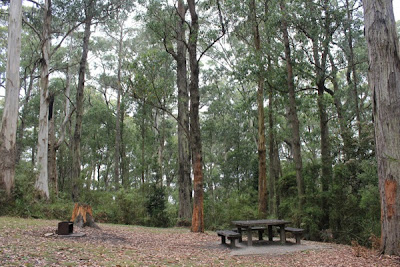 So that was where we headed for a picnic.  It brought back so many memories.  The drive there was through a windy bush road with no place to stop.  Often at least one of us was car sick.  So the fresh air of the bush was always appreciated.  The picnic tables are huge.  Perfect for a family of 7 kids.  The barbecues are as basic as they were in my childhood.  Just a metal fireplace with a sheet of metal to sit over the fire.  My parents were a dab hand at lighting the fire, charring some sausages and hamburgers, and sticking a damper in the ashes.

We even used to practice swinging the billy but my mum only let us swing it with cold water in it.  (For those who are unfamiliar with billy tea, traditionally water would be boiled over the fire in a metal "billy" and then the tea was added and the billy swung around and kept in the billy by some scientific principle that I can't remember.  I think my mum used to boil the water after we have played with swinging it. 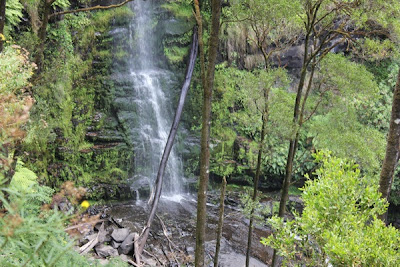 We weren't quite so organised as to have a bbq complete with damper and billy tea.  We did have a lovely picnic in the peace and quiet that I expect of the bush.  As children we often went on walks after lunch, even once doing the long bush to beach walk.  (My dad says it was to tire us out so he could have a quiet evening with my mum!)  Sylvia is just a bit young so instead we drove to Erskine Falls.  This is a short walk from the car park but it lost some of the charm because it was so busy.  Even so I enjoyed seeing the waterfall and the tree ferns that I associate with the area.  As you can see, my idea of the bush was lush and green rather than dry and dusty. 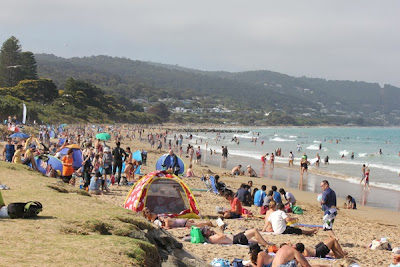 After our quiet morning swings, I was astounded at how crowded the beach when the sun finally came out one afternoon towards the end of our stay.  I don't remember it being so crowded in my youth, but I also don't remember ever swimming between the flags that signify lifesavers on duty.  Did they have such flags back then?  Was Lorne much quieter in the years before the Cumberland development when I knew it?  Or did we just seek out the more secluded beaches? 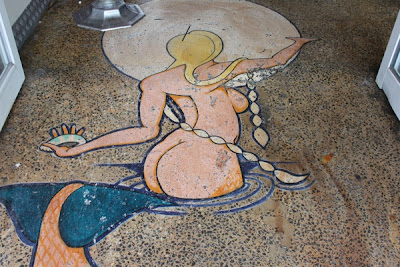 One change from my childhood is that the shopping was quite sophisticated.  There were none of the kitsch beach souvenirs that we loved buying.  Another time I will show you my little man made out of shells.  Now the shops are full of posh clothes and toys.  We did have a lovely time in the op shop, especially Sylvia who found a little doll with a dummy for 50c.  But I thought this kitsch painting on the floor of the fish and chip shop was more akin to the seaside town I once knew. 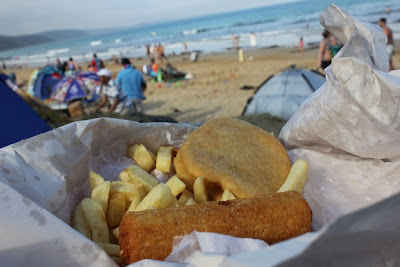 And what is a seaside town without its fish and chip shop.  Years ago E and I drove through Lorne and had the saltiest fish and chips we have ever had.  This visit was kinder.  On the sunny afternoon, we spied an empty park bench overlooking the sea.  Sylvia and I waiting there while E walked up to the Lorne Fish and Chips (42 Mountjoy Parade, 03 5289 1843) for dinner.  It was just delightful to eat hot salty chips, potato cake and corn jack overlooking the busy beach and the glorious blue water. 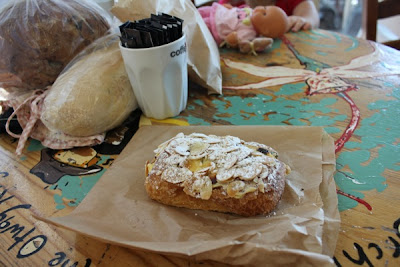 On our last morning I had to stop at Louitt Bay Bakery (46B Mountjoy Pde, 03 5289 1207) because I had walked past and admired the bread too often.  We bought a walnut and sultana sourdough loaf and a ciabatta.  Lovely bread.  While we were there we decided to have morning tea.  I had to try the chocolate almond croissant.  It was lovely but there was a bit much custard and I really could have done with something savoury like the cheese and chive sticks.  Sylvia had a pink iced cupcake which was one of the freshest lightest cupcakes I have tasted from a shop.  E had a cinnamon doughnut with his coffee and was very pleased with it.  I also loved the artsy painted tables in the bakery cafe and would have loved to have tried their salad sandwiches or pasties. 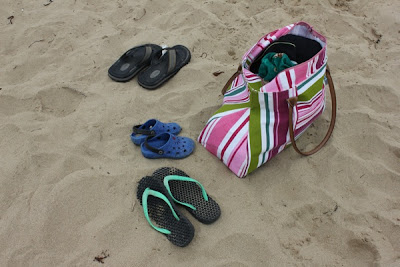 Then it was time to drive home.  I was sad to leave.  The sight of the gorgeous beaches down that way are good for the soul and I didn't have enough time in the beach.  A few more days would have been lovely but I was glad we had had our beach holiday.  There were a few other places I would have loved to have tried - The Bottle of Milk had lots of veg burgers, Marks Restaurant sounded very nice, the Upmarket balcony had the most gorgeous view, E thought he spied a cafe in Fowlers second hand bookshop on Williams Street, and I would have loved to have gone to the Arab where my mum wanted to work in the holidays when she was a student.

It was a quiet trip back along the Great Ocean Road to Geelong.  We then saw that on the day that we left, the only service station in Lorne ran out of petrol.  Luckily we had plenty in the tank!