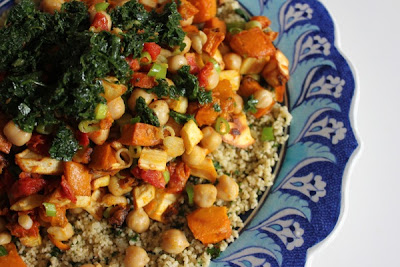 Before I start telling you about herbs and couscous and salad, you might notice that I have updated my blogger banner so it goes across the whole width of the page.  Sylvia and I had a craft session this afternoon.  I worked on my banner and she glued and cut and stickered.  I am not sure the banner is quite right but it is an improvement!

Like my banner, couscous is a constant work in progress.  It is hard to get right.  Often it turns out clumpy or dry or just plain stodgy.  Following a recipe would probably help!  I was searching for inspiration for Lisa and Jacqueline's latest No Croutons Required challenge which is herbs.  I stumbled upon a recipe for 'Giant couscous salad with preserved lemon and chermoula in Alice Hart's Vegetarian.  It took some tweaking but I ended up with one of my best couscous salads yet! 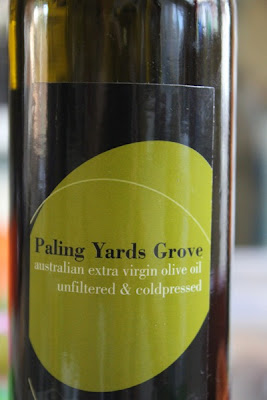 I was quite taken by the idea of making Chermoula.  It is a sauce of parsley, lemon, olive oil and spices.  I had decided that this would also be a good way to use some of the lovely olive oil that Fran and John gave me for my birthday. 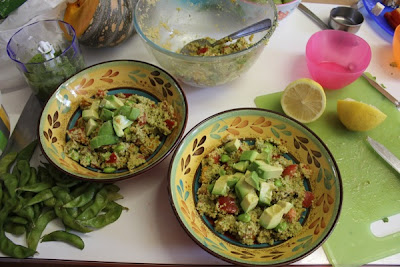 Firstly though I went on a detour.  I remembered that I didn't have any parsley in the house.  I headed off to the supermarket before dinner and as I got there I remembered I didn't have parsley because there was non in my last visit there.  So I bought basil and made pesto.  I tried a couscous salad with pesto, roast pumpkin, edamame, tomato and avocado.  It was nice but a bit clumpy.  E said it was more like a side dish. 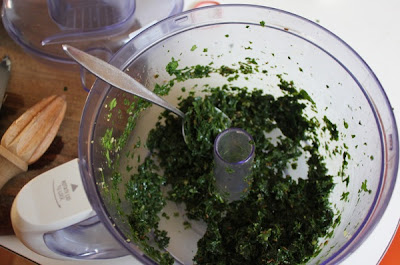 The next morning I had to put the car into the mechanic and found myself in the unusual position of walking into the supermarket on the way home at 8am.  They had parsley so I bought a bunch and decided to try again with chermoula.  It was very good though not swimming in oil like the picture in the book.  It was brilliant with the couscous because it kept the grains moist and separate. 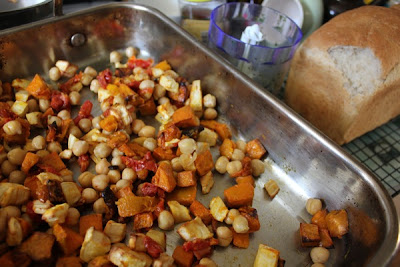 The first night I was happy to eat a big bowl of it with some salad veg on the side.  E less so.  The second night I served it with lentil burgers, salad veg and chia bread.  E was very pleased with it that night.  Sylvia didn't taste the couscous but did eat a chunk out of the bread - can you see it in the above pic?  E just thought the bread had come out of the oven that way.  Sigh!  Ah well, he does the dishes! 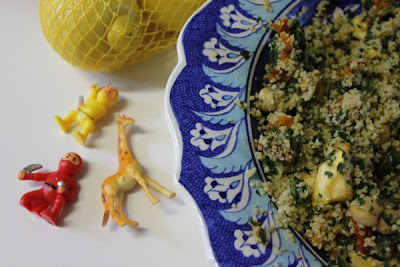 My one reservation is that parsley can sometimes stick in your throat but that is a minor quibble as I have come to love parsley and use it a lot.  I once thought it was only good for a poncy garnish so I have come a lot way.  In the above pic you will see Sylvia's new ninja babies (a bargain at 30c each!) that we bought last week on the day I made the salad.  She loves them and has spent many hours making cots for them with her building blocks.  Her imagination is amazingly fertile at the moment.  I like to think that this salad shows my own imagination still has a bit of kick in it!

Firstly make Chermoula.  Blitz all ingredients in a food processor.  I did mine in some batches especially as I found the parsley chopped finer if I did it in batches in my little blender attachment for my hand held blender.  Mine was a bit tart but that worked ok once in the salad.

Trim, peel and dice both the pumpkin and parsnips and toss with a drizzle of olive oil and a pinch of salt.  Roast at about 200 C for about 40 minutes.  (I went to the mechanics to pick up the car in the middle of this so I can't be too specific.)  Cool slightly and mix with chickpeas, sun-dried tomatoes and spring onions.

Mix couscous, stock powder and boiling water in a medium bowl.  Cover and sit for about 5 minutes or until soft.  Fluff up with a fork.  Stir through about half the chermoula.

To serve pile couscous in a large shallow salad bowl.  Heap pumpkin, parsnip and chickpea mixture on top and then dollop some chermoula on top.  Serve with any extra chermoula.

On the Stereo:
Authentic Hawaiian Favourites: Arthur Lyman
Posted by Johanna GGG at 18:04