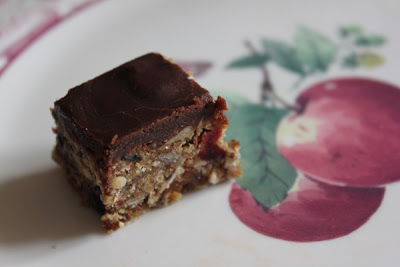 After making chocolate almond rice bubble slice recently, I was quite interested in more ideas for using nut butter.  This energy bites recipe was chosen by E because he preferred a slice to balls.  It appealed to me because when I made it last week it was so hot that I didn't fancy turning on the oven.  And I love how these slices allow a clear out of the pantry.

In fact it was so hot last week that we ate dinner outside - though that was partly because Sylvia wouldn't come inside.  Then on the night I made this slice it was so wet that both E and took twice as long as usual to get home because Melbourne went into traffic chaos.  Melbourne's weather is like that at the moment.  Either too hot or too cold and wet. 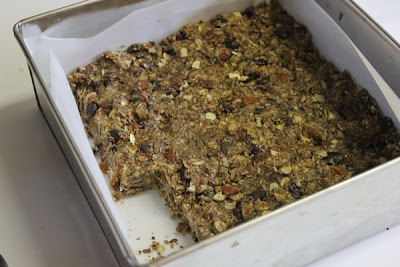 The slice also gave me an opportunity to use up some chocolate icing in the freezer.  The recipe says that it is fine without the chocolate icing but it was the Pinterest photo with the chocolate on top that first drew me in.  At first I was dubious about the slice.  I wasn't sure of the amount of ground linseeds.  Then I decided I really liked them.  But I loved the slice so much more once I put a layer of chocolate icing on top.  So did E.  Every time I gave a piece to Sylvia she licked the chocolate off the top and told me it was like a icy pole. 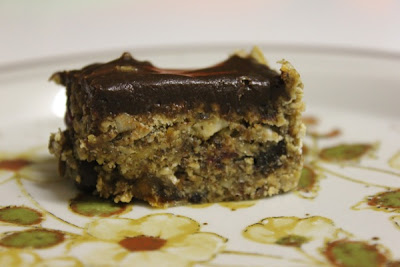 We still had the slice last weekend when we went to Ripponlea last weekend with friends Chris, Yav and Florence.  I wanted to take a piece of slice along but didn't think it quite right.  It was great morning tea snacks at work.  The icing went so soft that it was quite messy.  That's fine for me.  I didn't think I could bear to have Sylvia taking an hour to eat a piece and ending up with chocolate icing everywhere. 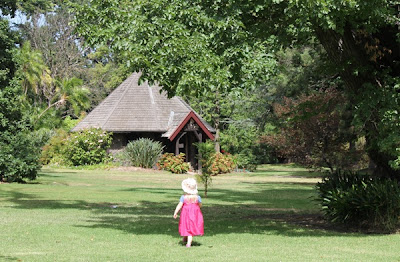 Instead we had a wee piece after lunch and took oat crackers, roasted chickpeas and grapes to snack on in the gardens. We decided not to do a tour of the grand house.  There wasn't time once we had picnicked on a rug and wandered around the gardens with the kids.  I did enjoy tryout out the telephoto lens that I had purchased with my camera.  It still feels a bit awkward but I don't often have the opportunity to use it. 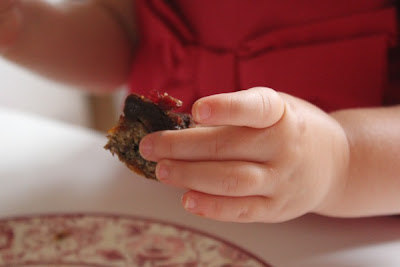 Our visit was timely.  Ripponlea features in a new detective series based in Melbourne that started on the ABC last week: Miss Fisher's Murder Mysteries.  We caught up on the first episode last night and really enjoyed the stylish production and feisty heroine.

I am sending this slice to Ricki for her Wellness Weekends (without the chocolate topping for a vegan, sugar free and gluten free slice if you use vegan choc chips and GF oats).

Mix all ingredients in a mixing bowl until well combined.  I found it hard going stirring it all together but with a bit of elbow grease it comes together.  Spread into a lined or greased 20cm square cake tin and press down with the back of a spoon.  Leave in fridge to firm up.  If desired, spread with ganache or chocolate frosting and return to fridge.  Slice up int squares to serve.  This slice is best kept in the fridge because once out of the fridge it gets quite soft (especially the chocolate frosting).

On the stereo:
Authentic Hawaiian Favorites: Arthur Lyman
Posted by Johanna GGG at 23:02