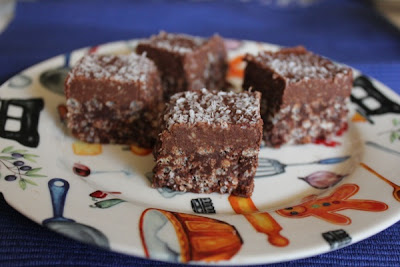 What have Valentines Day and local traditional dancing got in common?  Not a lot.  Maybe some people find it romantic to dance like a kangaroo for their beloved but I suspect they are few and far between.  Yet in this post they are linked by this chocolate almond slice which seemed just right for Valentines Day and was the perfect snack after seeing a dance performance last weekend. 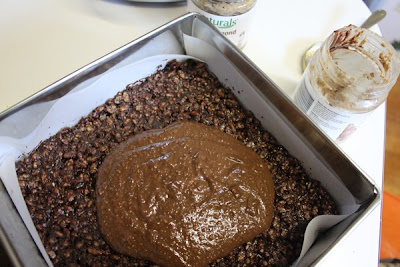 A surplus of nut butter, gave me an urge to make this No-bake Peanut Butter Chocolate Crispies with PB Fudge from Oh She Glows.  Sylvia is allergic to peanut butter so I used almond butter, which worked really well.  When I made the fudge topping I worried it was too sweet.  Once combined with the rice bubble mixture it was superb. 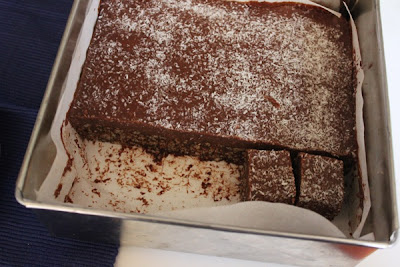 The whole thing seemed like a healthy version of the Mars Bar Slice that is so popular on my blog.  Sticky, crunchy, gooey with a creamy topping.  But less sweet and more chocolatey.  I also loved the addition of coconut which reminded me of childhood favourite, Chocolate Crackles. 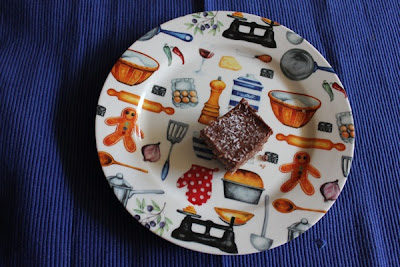 Last weekend we went to the city for Melbourne's Indigenous Arts Festival.  It was a great way to spend the afternoon.  I particularly enjoyed the Koorioboree, performances by eight traditional Koorie dance groups.  It is fantastic to see these groups reclaiming and sharing culture.  And I find the actual dancing really uplifting.  We also saw some Indigenous art in the Potter Gallery at Fed Square and some open air music performances. 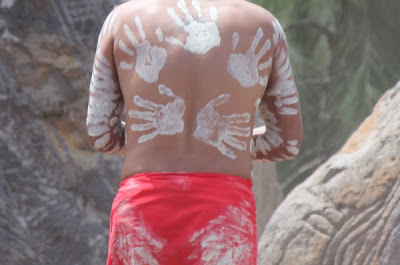 At the art gallery, Sylvia spied some colourful macarons and wanted one.  I thought of the choc almond slice at home and told her she could have a piece when we got home.  I was glad we waited because the slice was so much more satisfying than a macaron.

I also think that the slice would make a great Valentines Day recipe, especially in Australia where it falls in the summer, a time when I don't always feel like turning on the oven.  I don't get terribly excited about the day (we went out for dinner on Valentines Day this year as it was the day we could get babysitting but I would have preferred a quieter night) but I do love the opportunity to indulge in chocolate and fun shapes.  So here is a list of some of the inspiring Valentine recipes I have see around the blogosphere and some heart shaped baking on my blog.

Valentine recipes around the blogosphere:

I am also sending this slice to Jac of Tinned Tomatoes for her Bookmarked Recipes event.

Place almond butter, rice syrup, vanilla, milk, cocoa, and salt in a large mixing bowl and combine.  Add chocolate and microwave until it is melted (or you can do this in a large saucepan).  Stir well and mix in rice bubbles and coconut.

Transfer into prepared tin, press down with the back of a spoon and wait until it firms up.  Angela suggested 10 minutes in the freezer but mine was full so I just left it at room temperature for about an hour.

Meanwhile make the Fudge topping.  Place almond butter, chocolate, oil, and a pinch of salt in a medium bowl.  Gently heat until the chocolate is melted.  Add more salt if desired.  Pour over the firm slice and sprinkle with coconut.

Leave slice in the fridge until the topping sets (or Angela suggests an 45-50 minutes in the freezer).  Cut into squares or small bites to serve.  Keep in fridge (or freezer).  My slice lasted a week.

On the Stereo:
Ruby: the Killjoys
Posted by Johanna GGG at 23:32