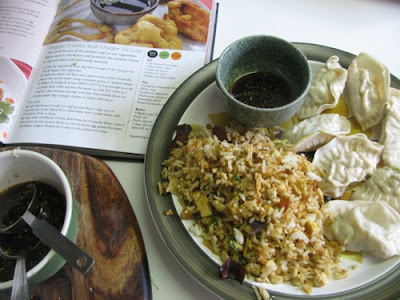 Dumplings.  The ultimate comfort food! Fun finger food!  Heaven in a wrapper!  Yes, I love them.  Last year I posted about making steamed vegetarian dumplings and received some very useful feedback.  My friend Nicki sent me her recipe and a few people suggested a dumpling press.  So I am now revisiting dumplings with far more experience after making them many times last year. 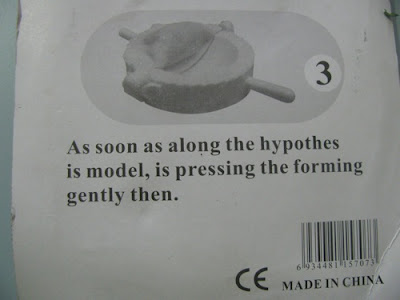 I was intrigued by the idea of a dumpling press and rushed out to buy one.  Actually I had to look around but Min Phat at the Vic Market had them.  I had to ask about 4 people before I could find someone who spoke English.  Which perhaps explains the odd grammar on the instructions.  My colleagues who work in editing were rather amused by this. 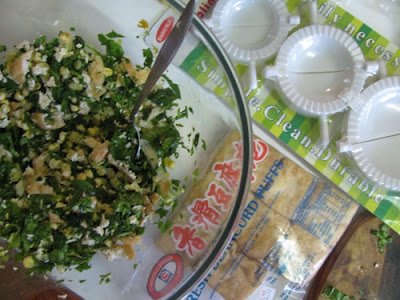 I tried the dumpling press and found it clunky.  Worse still, I cut my fingers by continually pressing them into the press when I folded it over (see below picture).  Even working out what size to use was tricky.  (I think I found that smaller was better).  After chatting with Nicki I persevered and found it got easier. 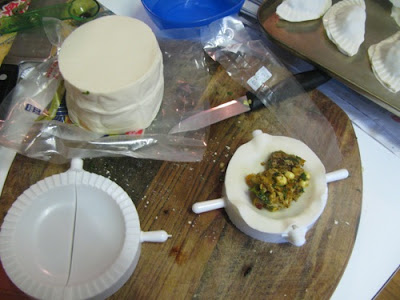 One thing I learnt (and this isn't in the photos as they are from lots of different times I made them) is to fill the cup of the press, then use the back of the spoon to pack it down and level it off.  This seemed to help make sure that I didn't overfill.  Nicki says she doesn't need any water to seal the dumplings using a press but I do.  Just a drip on my fingertip that I run over the edge. 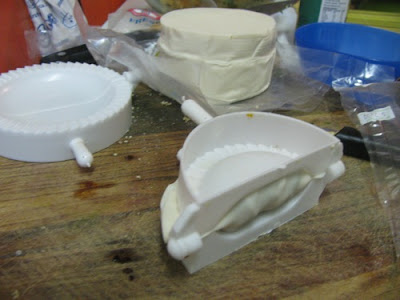 Getting to know the dumpling press was easier than experimenting with recipes.  I tried quite a few things.  I tried roasted pumpkin, tofu puffs, chilli non carne, tamarind, silverbeet and grated zucchini.  Not all at once.  But over the months that I was finding a recipe.  Then Nicki said that she had a tried and trusted recipe that she makes regularly. 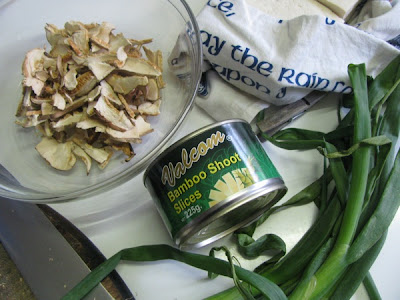 Quite a few of the recipes I had been trying involved cooking up vegetables first.  This one doesn't.  It involves lots of tofu, dried shitake mushrooms, bamboo shoots and spring onions plus seasoning.  I was dubious. Yet I have now abandoned all other recipes and make this one regularly. 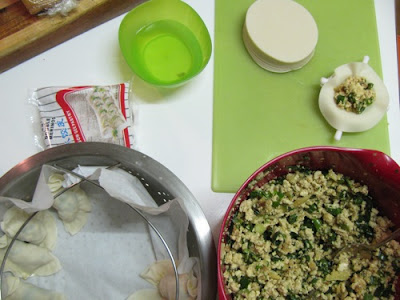 You can see the filling in the red bowl in the above photo.  It is full of flavour and vegies without having to do too much preparation.  Nicki suggested serving with soy sauce.  I have found that kecap manis (sweetened Indonesian soy sauce) is more flavoursome for an easy dipping sauce.  I tried a Sam Stern ginger sauce late last year and it was a bit thin so I think the kecap manis will probably remain our sauce of choice. 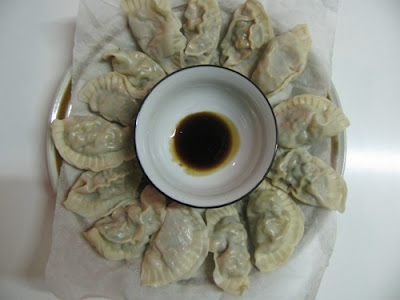 I'd love to tell you that Sylvia loves the dumplings too but she doesn't in the way I wish.  She does in other ways.  She loves helping to make them.  In fact the dumpling press is easy enough for her to use.  And she loves to eat the wrappers and leave the innards.  You don't even want to imagine the mess it makes.  (She would eat the raw wrappers too but I discourage this).  The other child-friendly part of these dumplings is that if you steam them they are forgiving.  I have steamed them for 15 minutes, turned off the heat and left them there while I sing Sylvia to sleep. 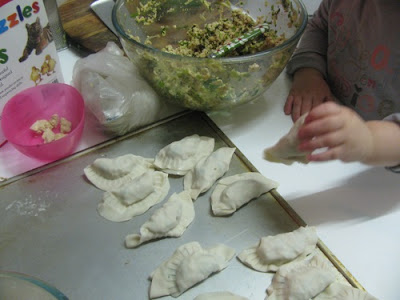 At first when I served the dumplings I would have a communal dipping bowl.  But then I bought some little Asian teacups with no handles and they were perfect to have as individual dipping bowls.  This is especially useful as sometimes we eat them on the run, serving them as they come from the pot rather than as a sit down meal at the table. 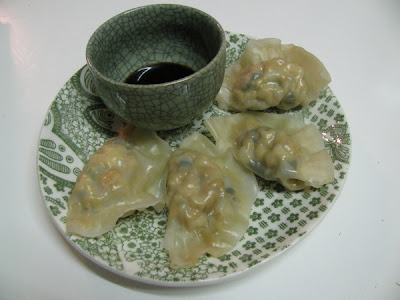 Lastly I found that serving dumplings was like serving an entree and then E was wondering where the main meal was.  They aren't so satisfying by themselves.  Then I discovered that, if I made half of Nicki's recipe, I would get about 30-40 and I could make fried rice with the leftovers.  Usually I just put the filling and rice in the frypan with a little extra seasoning and fry until hot. 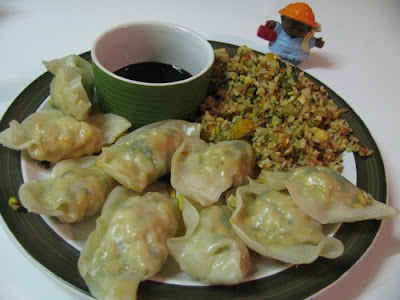 I am sending these dumplings to My Legume Love Affair (#44), founded by Susan of the Well Seasoned Cook and hosted by Vanessa of Sweet Artichoke this month.

Nicki's Vegetarian Chinese Dumplings
Nicki says it makes 60-80, I half the recipe and get this many but as she says it is a different amount every time.

- 1 kg hard tofu (pressed tofu is ideal) crumbled
- about 40g (1 small packet) of sliced dried shiitake mushrooms, soaked and chopped
- 1 bunch spring onions, finely sliced
- 1 bunch coriander or basil, chopped (I don't use)
- 1 x 225g can of shredded bamboo shoots, drained and chopped
- a piece of ginger, finely grated, or more if you love it
- 1 egg for binding (1 egg is fine to use even if you half the other quantities, but an alternative vegan binder could be used such as chia seeds?)
- 4 tablespoons of soy sauce, or to taste
- 2 teaspoons of sesame oil, or to taste
- 1 carrot finely grated (optional)
- 60-80 gyoza or wonton wrappers*

Mix everything in a big bowl (except the wrappers!).

Fill your wrappers with a heaped teaspoon of filling, then pinch together in half-moons, or better still use a dumpling clamp. Wet the edges of the wrapper with a fingeritp dipped in water just before pinching or clamping (NB Nicki says you don't need to wet edges if you have a clamp but I find I do).

To freeze the dumplings without having them stick together, place them on a baking tray lined with baking paper (touching one another as little as possible), and freeze on the tray. When frozen, put into bags or containers.

Steam: arrange fresh or frozen dumplings on baking paper in a steamer insert and steam for about 15 minutes.  This is my preferred method.

Boil: drop fresh or frozen dumplings into a pot of boiling water for a few minutes until they rise to the surface. Remove with a slotted spoon and enjoy dipped in a sauce.  Nicki does this mostly.

Fry: (NB: if frozen, boil first.)  Pan fry fresh or boiled dumplings in a bit of oil with a dash of sesame oil. Nicki calls this crispy deliciousness!

* In Melbourne you can buy large amounts of dumpling wrappers at Min Phat and other Asian groceries.  Alternately you can make them.  I am yet to try this but I have seen a traditional recipe at Poh's Kitchen (5 Oct 2011) and a gluten free recipe at Where's the Beef?

Mix in a small bowl.

On the stereo:
Assembly: John Foxx
Posted by Johanna GGG at 21:56