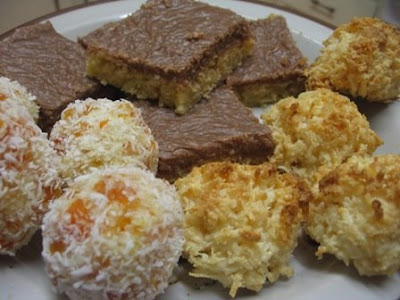 Condensed milk is such a comfort food in my family that I was curious recently when I came across a mention of it in my current reading matter (One Continuous Picnic by Michael Symons). He writes about the railways’ impact on the Australian diet in the 19th Century by keeping the population dependent upon the factory and alienated from fresh farm produce. Transport “provided the raw materials for utterly typical ‘Aussie’ white bread, camp pie, condensed milk, tinned apricots, tomato sauce and lollies.”

I grew up loving sweet and gooey condensed milk. Sometimes we were allowed to lick the spoon but we never went as far as a friend once claimed. She said her mother lined up the kids and squirted condensed milk in their mouths from a tube. Sounds good to me. I still take delight in how the sticky cream oozes out of the tin once you make the first cut with the can opener. Many 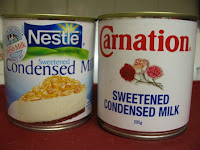 of my treasured childhood recipes have condensed milk in them: grubs, caramel slice, coconut ice, caramel tart, cheesecake. In adulthood I have discovered many new favourite recipes: walnut fudge cake, fudge sauce and mock turtle slice are but a few.

But I have often wondered why it was named ‘condensed milk’. Now I have found that when sweetened it was called condensed milk and when unsweetened it was called evaporated milk. The history of the stuff is fascinating because it reflects on how hard it was to find fresh food in the 19th Century. Where modern children might think milk comes from a carton in the refrigerator, our ancestors might well have thought milk came from a can in the pantry. It also explains why our foremothers have given us many ‘heirloom comfort recipes’ sticky with condensed milk.

Condensed milk was invented by Mr Gail Borden in the USA in the mid-19th Century to preserve surplus milk. Milk condensers were first installed in Melbourne in 1882. In 1914 Nestle promoted it as ‘the best substitute for the mother’s milk’. How times have changed! Although I did notice the claim on my modern Nestle tin that it is made from ‘fresh milk’ which made me laugh because, by the time you get it out of the tin, it is most definitely not fresh.

About.com says that condensed milk was used more than fresh milk at the turn of last century because it was long lasting and posed less of a health risk in the days before refridgeration. The idea came to Mr Borden during a transatlantic crossing where the cows became too seasick to be 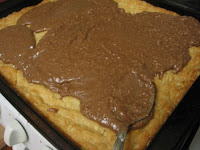 milked. He was either concerned about calves or babies lacking their milk supply depending on if you read About.com or The Old Foodie. He received a patent for it in 1852 and added sugar to inhibit the growth of bacteria. Unsweetened canned milk (known as ‘evaporated’) was not patented until 1885.

Mr Borden’s company became Eagle Brand. The Eagle Brand website credits condensed milk with feeding the army and lowering the child mortality rate in America. Winning wars and saving babies sounds like marketing hype but may have a grain of truth. More credible is the notes on a competition for condensed milk recipes in 1931 that produced over 80,000 recipes. If you go to Lidian’s Kitchen Retro you will find a post on a 1952 Eagle Brand book of 70 magic recipes with a recipe reproduced for ‘cookies that almost make themselves’.

The Old Foodie has a few old condensed milk recipes – a 1896 recipe from the Manual for Army Cooks has a Christmas Pudding made with milk or condensed milk, a recipe for ice- cream from 1942, and a recipe called All That from 1970s which sounds a bit like a baked versions of my grubs. Most fascinating were a couple of recipes from Alice Bradley’s For Luncheon and Supper Guests from 1923. One recipe was for salad dressing and the other for Cocoanut Cakes. The two recipes used a tin of condensed milk between them to avoid the cook taking furtive spoonfuls of the leftovers.

I don’t fancy condensed milk in salad dressing but I was fascinated by the ‘cocoanut cakes’. Mainly consisting of coconut, condensed milk and egg whites, they were similar to condensed 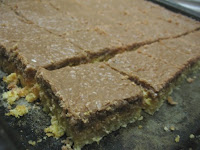 milk macaroons that I made on the weekend. Like Alice Bradley, I was using up leftover condensed milk. I had made a favourite Mock Turtle slice. One of my former housemates, Yarrow used to make it because his mum had made it for him when he was young. The name always sounded very Lewis Carroll but I have since discovered that there is such a thing as a turtle bars but I am still not exactly sure what they are.

Nevertheless, Mock Turtle is most excellent. It has a chewy buttery oaty base that reminds me of Anzac Biscuits. The topping is a gooey concoction of condensed milk, cocoa and coconut. Not the healthiest of treats but guaranteed to delight small children and big children alike. I took them into work for morning tea this week and was berated by E when he discovered I had only left a few at home. 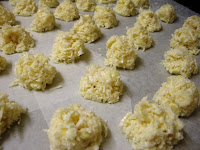 for eggs – a fine exchange in my books! These macaroons were warm and soft when straight out of the oven. When they cooled, I initially worried they were too hard. The next day they were delightfully chewy, but not popular with E.

Both macaroons and mock turtle disappeared quickly at work. I can’t imagine anyone not loving anything with condensed milk in it. It tastes of old-fashioned childhood comforts, it pairs perfectly with chocolate and it makes anything taste absolutely delicious. No wonder it has stood the test of time.

To make the base: Mix all dry ingredients in a medium to large bowl. Melt golden syrup and butter in a small saucepan. Remove from heat and stir in lightly beaten egg. Pour butter mixture into dry ingredients and mix well. Spread into a greased lamington tin (9x 13 inch). Bake at 150 C for 15-20 minutes until golden brown. (I used a skewer to check it was cooked when just turning golden.)

Make the topping about 10 minutes after the base has gone into the oven. Combine butter and condensed milk in a small saucepan over low heat til the butter has melted and the ingredients are combined. Remove from the heat and mix in icing sugar, coconut and cocoa.

Spread topping over the base using the back of a spoon or a knife. This is easiest when both base and topping are warm. It always seems like it will never be enough topping but it should cover all the base if you dont get carried away eating it out of the saucepan. (I never have but it tastes so good it is very tempting.) Allow to cool to room temperature and cut into bars or squares.

Mix all ingredients together. Drop in teaspoonfuls on a greased or lined baking tray. Baked at 150 C for about 15-20 minutes or til just turning golden brown. (Don’t let them get too well cooked – I once threw out a batch that I gave a few more minutes in the oven.) I found the mixture seemed to fall apart a bit and made an effort to shape it into balls but when baked it held together easily.

On the Stereo:
Worker’s Playtime: Billy Bragg
Posted by Johanna GGG at 22:33