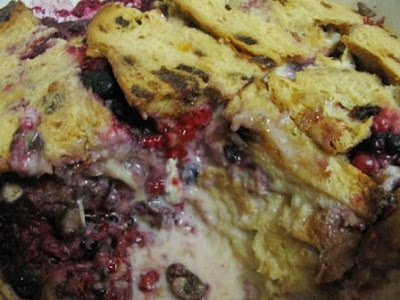 Bread and butter pudding is a dessert my mum used to make for us regularly when I was a kid. She layered bread that was spread with butter and jam into a casserole dish, scattered through with sultanas, poured a milky eggy mixture over it all, sprinkled it with coconut and baked it until the top layer of bread was crispy. It seemed quite effortless. She would then serve it with cold milk and a sprinkle of sugar. I loved the contrast of crunchy and soft, hot and cold.

I have fond memories but so many recipes I see have lots of eggs in them which isn’t my sort of thing. However the past year or so of blogging has given me hope. I have come across many versions of this dessert that have piqued my interest. I have been particularly attracted to ones filled with fruit and chocolate. I like the use of different sorts of breads. And they have very little, if any, eggs. Here is a list of some of the puddings have inspired me to rethink bread and butter pudding.

There is quite a variety here. From Gigi’s fairly traditional version to Ricki’s vegan breakfast offering that was not even intended as a pudding. But what they all have in common is baked soggy bread. Doesn’t sound very appetizing when you put it like that, does it?

In fact, thinking about bread and butter pudding, I got to thinking about soggy bread and wondering why people started eating it in the first place. Was the bread so dry our ancestors almost broke their teeth? Did they overcook it (too much wood on the fire) or had it just been 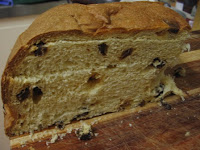 sitting around for weeks? I can only think they must have been desperate.

I don’t like soggy bread, myself. My mother loves making summer pudding these days – not something she ever made when I was a child. It is a cold pudding of bread and berries packed into a pudding basin to make one berry soggy mess. Ugh! But this Christmas I finally found a summer pudding I liked. It was made with panettone. You know the Italian bread that is light and fluffy with citrus peel through it? My mother always had at least one around the house during Christmas. Well, I have discovered that it tastes so good, it even is quite palatable when soggy.

This year in April mum gave me some of the remnants of a panettone still leftover from Christmas. I decided I would try a bread and butter pudding. I looked over all these wonderful recipes I had collected. Like a magpie, I collected the bits that interested me. I envisaged my panettone being drowned in a warm gooey berry and chocolate sauce rather than a custard. In what I assume is part of the pudding's traditions, I used up berries from the freezer, egg yolks from the fridge and surplus condensed milk.

The pudding was good but didn’t quite match the image in my mind. It was drowned but not quite as gooey as I had hoped. I had mixed feelings about it. It was just a little soggy for my liking when I served it the first night. The second night it was firmer and most delicious. Then it 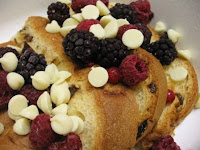 sagged a little again on the third night. Some mouthfuls felt like I was eating hot soggy summer pudding but others were a heavenly combination of tart berries, citrus-infused bread and a touch of white chocolate.

E loved it so I am sure I will try it again. But I am not big on desserts so it might be a while. Maybe next Christmas when panettone is begging to be used once more. Or I might get the recipe from my mum some time. Meanwhile, here is my version. Not the definitive bread and butter pudding but a worthy addition to my jumble of ideas.

Grease a 23cm square casserole dish. Place one third the slices of panettone along the bottom. Scatter with half the berries and choc chips. Repeat and top with remaining third of panettone. Mix one cup of milk, the condensed milk, the egg yolks and cinnamon. Pour over the panettone layers and press down to ensure all are soaked in. Add a little more milk if necessary (up to one cup). Baked in 180 C oven for 45-60 minutes. Serve hot with cream.

On the stereo:
Scorpion Wind: Death in June and Boyd Rice
Posted by Johanna GGG at 22:11