PPN: Story of a pasta sauce 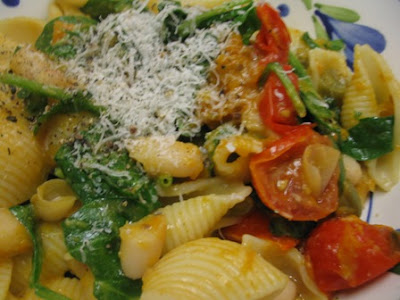 Today I thought I would tell you the story of some vegetables that have journeyed through the weekend with me. These vegetables have been through recreation, resurrection and recycling. When my plans have gone awry they have rescued, revived and redirected me. I just wish I knew what to call them. Is it a salad, it is a brunch fry-up, is it a pasta sauce? I’ll let you to be the judge.

Saturday morning found me in the supermarket raiding the fruit and vegetable section, full of hope. My fridge is still full of vegetables that I have not yet cooked but plan to during the week. I 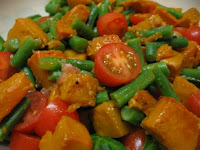 baked bread and decided I would roast some pumpkin while I preheated the oven and baked the bread. While the pumpkin and bread did their thing I prepared other vegetables for what I planned to be a salad. I was inspired by a recipe in my notebook but took ideas for a raspberry vinegar and orange juice vinaigrette from one made recently by Helen.

In my mind I intended to divide the pumpkin into halves. One part for a salad I was taking to a friend’s and one part to add to a brunch dish of tomato, cannellini beans and spinach. In my hurry I put all of the pumpkin into the salad. My friend Will was delighted as he loves pumpkin. He had 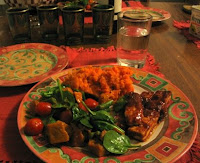 made some amazing panir cheese steaks which he served with mashed sweet potato and the salad. Great combination but so much salad that I took home oodles of it.

On Sunday morning my sister, Francesca and partner Steve were coming for brunch. I had planned a simple dish of warmed tomatoes, cannellini beans and spinach to go with zucchini fritters. But I had thought it would be nice to add some of my roasted pumpkin. When I ended up with lots of salad over, it seemed as good warmed as cold so I decided to recycle it instead of making another dish.

‘So I’m having fried salad and a smoothie for brunch,’ groaned the Grim Eater, as he vacuumed the rug. He just didn’t appreciate that the salad’s highlight (garlic) and disappointment (not enough vinegar) made it perfect for resurrection as a heated dish and earned gratitude for time- 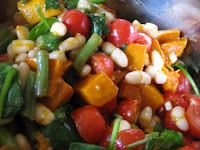 saving. I added some cannellini beans, more tomatoes, more spinach, more garlic and some lemon juice. Warmed up it was delicious.

But at the end of brunch, we still had too much of it to wish away. I looked at E as we cleared the dishes and said, 'pasta sauce for dinner!' Initially I was disappointed not to make the cassoulet I had planned but after baking for morning tea at work tomorrow, I was relieved to have the convenience of my friendly vegetables. I added some more spinach and heated it (again) by which time it was wilting in a very pleasing way that was much 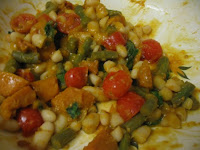 more sauce than salad. Stirred through hot pasta with a bit of parmesan cheese, Bob’s your uncle!

I loved it so much I wanted to write it up but it made me think just how artificial recipes are. As you will see by my story, it has been added to and reheated too many times for any simple equation. So here is a recipe below which gives an approximation of what I did all bundled into one dish. It is really just collapses a few moments in time into one rather than being an accurate reflection of any of the reincarnations.

I am sending this dish to Ruth at Ruth of Once Upon a Feast for her weekly Pasta Presto Nights. I am sure she will appreciate the flexibility of a pasta recipe. Meanwhile, stay tuned for more post on my weekend.

Place pumpkin in a large roasting dish. Drizzle with olive oil and Roast pumpkin in cool oven (150 C) for 1 hour and then at 180 C for 20-30 minutes or until soft.

When pumpkin is cooked toss in a bowl with tomatoes, green beans, spinach and cannellini beans and dressing. Season. If using as a salad, it is ready to serve with or without the pasta. If using as a pasta sauce, warm in a saucepan until vegetables are warmed and slightly wilting. Toss through cooked pasta and serve with parmesan cheese if desired.

On the stereo:
The Rule of Thirds: Death in June
Posted by Johanna GGG at 23:32