A Break in Beechworth 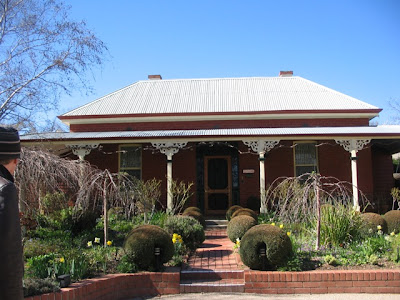 Back in September, E and I had a week in Beechworth which I had meant to write about earlier but it has taken me til now (so forgive me if my memory is a little less than fresh!). Beechworth is a former goldrush town about 3 hours drive north east of Melbourne. It retains a heritage feel and has many fine dining places and gift shops. We had a great break there with lots of much needed good food and rest.

We stayed at Kinross Bed and Breakfast (34 Loch St, Beechworth, tel: 03 5728 2351) in the town and would highly recommend it. Our hosts, Terry and Gail were so friendly and it was such a beautiful and relaxing place. Every morning Terry would chat with us and offer us more food for breakfast than we could possibly eat. First up was Gail’s homemade muesli, yoghurt, stewed fruit and a fruit salad. I particularly loved the fruit salad which wasn’t a disappointing slush of melon but was full of apple, banana, strawberries, melons and home grown kiwi fruit.

The first morning I ate a hearty bowl of muesli and fruit, assuming that I wouldn’t get a fry up. But Terry and Gail were keen to accommodate a vegetarian with an egg aversion. Each morning E had 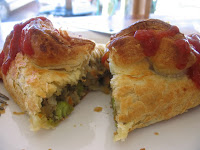 a fry up with eggs, sausages, bacon, tomato and mushrooms, and I began to feel sorry for him as I had a different breakfast each day – beans on toast, corn fritters and fried vegies, pancakes and maple syrup. I felt well and truly spoilt. And full. Then Terry would offer us fruit toast! The first morning we were so full we could only share a vegetable pastie and a small donut for lunch. After that we tried to leave room for lunch.

We had pastry lunches most days, especially given that a few lunch places we were eager to try were closed on the days we went there. But the baked good were fine fare. Beechworth Bakery is well

known for its fantastic food and we enjoyed eating there, although a few more vegetarian options would have been welcome.

For dinner, the first couple of nights we went to a nearby hotel called the Hibernian. The pub grub was good but what I particularly liked about the place was that it had a vegetable servery by the bar with about 5 different vegetable side dishes that you could serve yourself to eat with your meal. The first time I went I had ravioli with a rich creamy sauce. I was grateful for the vegetable plate on the side with broccoli in tomato sauce, cauliflower in a light cheese sauce, roast vegies, and corn on the cob. I wish more pubs offered such a wealth of side dishes. The second visit I had a spinach, roast pumpkin and roast beetroot salad with a fantastically sharp dressing – again with vegetables on the side.

On our last night we had dinner at the Green Shed which had a rustic charm. It was a large room with high ceilings, with the walls painted pale green over bricks with large open fireplaces. 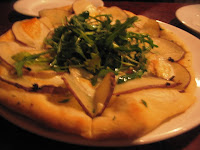 The waiter informed us that the building had originally been a printers built in the nineteenth century. On the night we were there, one of the chefs was ill and so quite a few items were off the menu, but it didn’t bother me as most of them were meat. E and I shared a wonderful potato, taleggio cheese and rocket pizza, and a chickpea, orange and yoghurt salad. The crust of the pizza was light and crisp and the flavors were simple and yet different to the usual pizzas and salads on café menus. We also had a rich chocolate rhubarb tart for dessert – I ate the rhubarb off the top and E had the tart!

Even browsing the shops offered some foodie delights. We spent some time in the Beechworth Sweet Company. It is two rooms full of all sorts of lollies (or sweeties or candy). Rows and rows 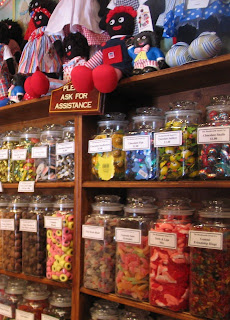 of liquorice, jubes, chocolates, boiled lollies etc etc. Lollies from all around the world and a lot of lollies reminiscent of childhood. E was particularly keen on the fudge but I had a weakness for chocolate bullets. I was also fascinated in a gift shop by the range of Italian vegetable scented soaps – tomato, artichoke, lettuce were some of the unusual scents! And in a shop full of old bottles and books I bought a 1960s vegetarian cookbook (500 recipes for meals without meat by Marguerite Pattten) which gives some insight into what life might have been like to be a vegetarian a few decades ago - “Vegetarians know the value of nuts and, although most people do not accept them in cooking or savoury dishes, some of the recipes are delicious as well as nutritious.”

Our final stop on the way home was at the Milawa Cheese Factory, a short drive from Beechworth. Milawa prides itself on being gourmet food country and deservedly so. We bought Blue Cow madras chutney at Milawa Mustards before heading off to the cheese factory. In fact it is a cheese factory, a bakery, a winery, a chocolatier and there was even an art gallery. E had a pie for lunch but I was delighted (to the 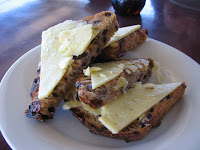 bemusement of the staff) to have wonderful substantial fruit toast topped by sharp cheddar cheese. I even had to take home a loaf of sourdough bread which was fantastic - I must hunt down where they sell it in Melbourne!

We were pleased by the bountiful offerings of Beechworth and its surrounds. Country food has come a long way since I first went vegetarian and was told by a country chef that I was the bane of his life. A fine week of foodie delights!
Posted by Johanna GGG at 21:14