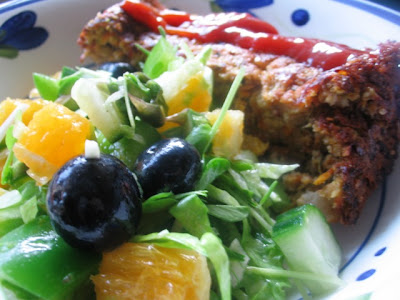 In the supermarket last week I was asked to try some fresh pineapple by a saleswoman with a little sales counter set up by the zucchini. These people always make me feel awkward because I want to cheer them up with a sale but I don’t really want their goods. On this occasion because I was more tempted by the zucchini than her pineapple, and I felt a little shamefaced about reaching almost behind her for some zucchinis. Maybe it was my awkwardness that made me buy more than I really needed – to show her I do buy generous amounts when I want something!

But I digress and am just making excuses for having too many vegetables for my nutloaf I had decided to make. I love my nutloaves and find that adding grated zucchini and carrot makes them lighter and less inclined to be stodgy. This nutloaf is one I love to make with whatever ingredients are about. The recipe below is what I made last week but is fairly flexible, depending on your fancy.

Due to having more zucchinis and carrots than usual, I made a large mixture and ended up using two loaf tins, both lined with baking paper – I have had problems in the past with the loaf sticking to the tin. One tin was an old metal tin and the other was a new red silicone tin

(courtesy of my mum). I was amazed at the difference in the loaves when they were turned out. The one in the metal tin browned up a lot more than the silicone one – although the one side of the silicone loaf that didn’t have paper lining it seemed to brown quite a lot. Seems like I might need to do a bit more investigation on the differences between silicone and metal tins.

I have also added a salad recipe which was inspired by a recipe from the Vegetarian Society for Blackberry, Raspberry and Fennel Salad. But at the supermarket I found it was too late for fennel and too early for raspberries so I improvised with orange and blueberries and what was in the fridge. I added an orange vinaigrette from Vikki Leng’s A Vegetarian Feast. Blueberries look good but can taste a bit bland (possibly this is due to the supermarket berries not being of the best quality) and I would have preferred raspberries or strawberries. Having said that, the green vegies and vinaigrette were fresh and tasty alongside the nutloaf.

Fry onion in oil til translucent. Add garlic and sesame seeds and fry another 3-5 minutes. Place onion mixture into large mixing bowl. Add remaining ingredients and mix well. (NB only add water as needed – my loaves were quite soggy in the middle and made me wonder if I needed quite as much water as I added). Mixture will be quite stiff and should stick together.

Spoon into loaf tins and smooth top with the back of a spoon. I baked mine 50 minutes and the 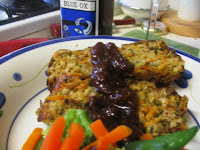 outside was done ok but it was a little soggy in the middle. I only served two of us and re-baked the middle part the next night. If you want to serve it all at once you may need to bake it longer. The cooked nutloaves freeze well – you could slice up and then freeze if you only wanted to take out a slice at a time.

Serving suggestions: steamed vegies and chutney OR salad and tomato sauce OR roast vegies and gravy (see photos and salad recipe below).

Place vegies and fruit in a medium salad bowl. Mix vinaigrette ingredients – I prefer whisking with a small whisk but you might also shake in a screw top jar. Add vinaigrette to salad. Toss and serve.

On the Stereo:
Brahms German Requiem: Otto Klemperer conducting the Philharmonic Chorus and Orchestra
Posted by Johanna GGG at 17:38