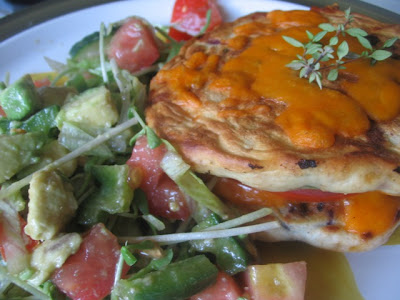 I made pancakes on the weekend but they were a bit of opportunism and experimentation – you might say they swung both ways (unlike the voters in the Australian federal election on the weekend who seemed to know exactly who they were voting for).

The recipe, in Vikki Leng’s Vegetarian Feast, called for cheese, leek and chives to be added to the pancake batter. After the excitement of the polling booth (including numbering the senate candidates from 1-68), I was ready to just grab a copy of the newspaper and head home. At 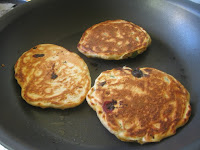 home I regretted not getting leeks but thought I could get away with asparagus and then I thought maybe I could put in the remainder of my blueberries from my salad the previous night.

Let me explain my idea of pancakes that are a little bit sweet and a little bit savoury. I love going to the Pancake Parlour and ordering the cheese pancake with salad. I eat half my cheese pancake with salad and the other half with maple syrup. I wondered if I could take this a step further by combining asparagus and blurerrries in a pancake. Hmmm…

Unfortunately I think the answer is no. The asparagus and blueberry combination didn’t quite work – it was edible but I feel maybe I should have made some asparagus pancakes and some blueberry pancakes. I do feel, however, that there might be an opportunity in the future to do some berry and cheese pancakes.

What was particularly pleasing about the recipe was that it offered an option to bake the pancakes as a stack – something I haven’t done before. Again I didn’t have the chives which 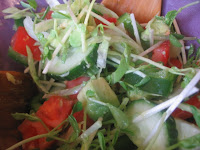 would have been good. But I had some tomato and cheese and I added Tabasco, thyme and garlic for extra flavour which worked well.

I served the pancakes with a salad of iceberg lettuce, snowpea sprouts, tomato, avocado, and cucumber, with a squeeze of lemon juice. The pancakes would have been a bit stodgy without the salad but with it, they were a delicious meal. (And we did have a few leftover pancakes for the next morning - I had one reheated with maple syrup for breakfast and E had one warmed as a snack.)

Mix flour, eggs and milk til smooth. Add remaining ingredients. Heat a teaspoon of oil in a large frypan. Cook large spoonfuls of the mixture over medium heat til bubbles rise and begin to burst on uncooked side. (Actually bubbles didn’t seem to appear on my uncooked side so I just had to wait til the uncooked mixture thickened a little in the way it does when it is beginning to cook.) Turn the pancake and cook 2 minutes on the other side. Vikki gets 12 pancakes but I only got 9 so mine were probably a bit bigger than she intended.

To make the stacks, place one pancake on an oven tray or in a baking dish and top with cheese slices and tomato slices. Sprinkle with garlic, thyme and Tabasco. Top with another pancake and a little grated cheese. Repeat with other pancakes. Bake in oven at 180 C for 12-15 minutes. Three pancake stacked served the two of us. Serve hot with salad.