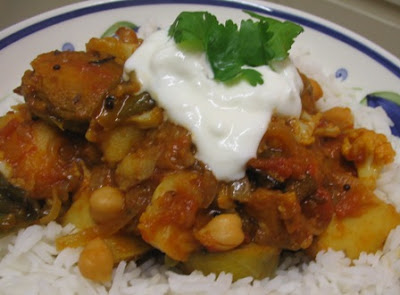 I have admitted before that I am frugal with chillis. While E loves to splash some Tabasco on most things I cook, I often use less chilli than a recipe calls for. I have had too many bad experiences with spicy food. I even wear rubber gloves to cut up chillis.

Although I am not talking about cooking with chillis here, I wanted to let you know I can’t stand very spicy food, before I tell you about my encounter with vindaloo. When we go to an Indian restaurant, E might order a vindaloo but I wouldn’t touch it with a barge pole because of its reputation as one of the hottest of curries. It is the sort of curry that British football hooligans dare each other to eat, hence the Fat Les footy anthem with the chorus line, ‘And we all like 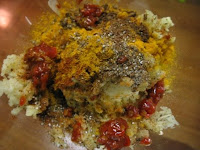 Vindaloo.’ Even the name sounds like something you might pant as you reached for water to cool your burning mouth!

I was quite surprised to read that Vindaloo originated in Portugal. It seems that the Portuguese brought it to India and the Goans added their blend of spices. Well the recipe I used further stirred the melting pot of cultures. It added panch phoran which comes from Bengal in the east of India, a long way from Goa in the north! I had a quick look at other blogs giving vegetarian Vindaloo recipes - FatFree Vegan Kitchen, Lisa’s Kitchen and Enjoy Indian Food all used different spice mixtures so I felt reassured that, as with many Indian curries, there isn’t one definitive list of ingredients that I was transgressing.

One of the main reasons I decided to make this Vindaloo recipe was to find another way to use my panch phoran spice mixture which I used (unsuccessfully) in dahl recently. The recipe also appealed because I had all the ingredients, I could make it without 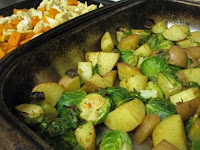 a spice grinder, it had roasted vegetables and the recipe comes from the Café Flora Cookbook which I am loving at the moment.

One of my main uncertainties about the recipe was what was meant by paprika. Being a chilli wimp, I chose to interpret this as mild paprika but probably should have used hot. I also halved the vindaloo recipe, because I worried I would have too much leftover. Bad decision! It meant that I didn’t have enough paste for the curry.

Despite these two 'problems', the vindaloo was a great success. I was really pleased that the spice mixture looked authentic and smelt wonderful. The roast vegetables also added great extra flavour. I suspect if I had put in 2 tsp of hot paprika I might not have been so pleased but I will add a bit more heat next time. It is not something to whip up quickly but is well worth a bit of effort.

I am sending this to Meeta for her Monthly Mingle, which is Bollywood Cooking this month. She is looking for glamourous and extravagant dishes fit for a Bollywood musical. This vindaloo might not be as fiery as some others but it sure has a lot of character!

Firstly you must prepare the vindaloo paste as below.

Next prepare the vegetables for roasting by mixing chopped vegetables with two tbsp vindaloo paste, a little oil and some salt and pepper. Place in roasting trays and into a 200C oven to roast. I used two roasting dishes to allow them to spread out more. Flora suggested roasting for 30 minutes at 200 C but mine took about 1 hour. This can be done in advance or the day before or while you are preparing the curry.

Heat oil in a large stockpot. Add panch phoran until mustard seeds sputter. Add onions and fry over medium heat for about 10 minutes or until soft. While onions are cooking, dissolve miso in a little hot stock or water and set aside. When onions are softened, add 6 tbsp vindaloo paste to the pan and stir constantly forabout 30 seconds.

Add miso mixture, the remaining stock, the chickpeas, tomatoes and salt. Bring to the boil and simmer for about 20 minutes. If it is ready before the vegetables, keep warm.

When the vegetables are roasted mix in with the tomato mixture and add the lemon juice. Serve immediately with rice or bread.

Mix all ingredients. The recipe calls for them to be ground in a food processor but I found that it was fine to just mix them by hand.

On the Stereo:
Absent Friends: The Divine Comedy
Posted by Johanna GGG at 23:51