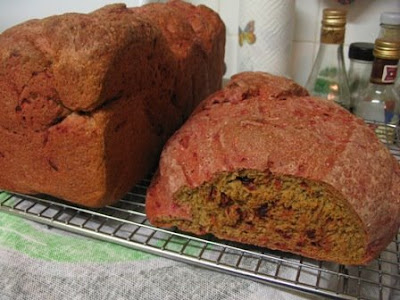 I grew up with my mum baking bread and since I moved out of home I have baked it occasionally. I like to think I know a thing or two about bread making. After kneading and proving enough yeasty loaves to feel comfortable with bread dough, I didn't expect that I would find myself struggling to make sense of what should have been a simple bread recipe.

On the weekend I decided to make Russian Vegetable Bread from New Recipes from the Moosewood Restaurant. I was attracted by the promise of a rosy hue and the opportunity to use up some fresh dill. One of the most helpful guides to bread making is in Mollie Katzen’s 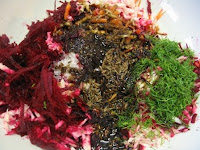 Enchanted Broccoli Forest and I would suggest the Moosewood writers take some writing tips from Mollie.

I know, I know, I should read the instructions more carefully. But it seemed odd that there was no sweetener in the ingredients list and yet when I checked the instructions in the appendix which apparently is for ‘wary novices’, I found it is needed. The instructions for adding the flour are vague and I don’t know why I was instructed to beat the dough 300 times.

The suggestion that beginners should go to the back of the book is alienating and patronizing. An ill-advised tactic if you are trying to persuade readers to ‘aspire to that memorable, evocative, appreciative romance with food, which seems to begin with real bread, made by hand’, as is stated at the introduction to the section. Despite my familiarity with bread making, I struggled 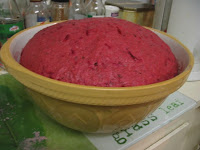 with this recipe, even with checking the advice in the appendix. I am glad that I don’t consider myself a novice or this experience might convince me that I should never attempt another loaf of bread.

I found that the dough was too soft due to my laxness with adding flour. I kneaded it for 25 minutes and it still didn’t get to the right elasticity. I baked it longer than advised. And, yes, I was a little narky when it finally came out of the oven after 6 hours of kneading, proving, and baking, because it seemed that it wasn’t cooked properly.

As it happens, E has loved this bread. I had expected it to be too strong, too dense, too weirdly coloured for the Grim Eater. But he was full of praise. After commenting that it looked like some alien life form, he happily sampled and told me he couldn’t get enough of the bread. The rosy-hued crust seemed intriguingly unnatural and 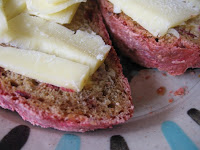 it was odder still to slice the loaf open and find the inside a warm caramel colour with flecks of crimson beetroot. It was surprisingly and pleasingly soft with subtle flavours of molasses, rye and caraway.

It seems that something went right. In fact, it was good enough and interesting enough that I would recommend trying this bread, despite my anxieties. I hope that I have amended the below recipe enough to make it a little friendlier to novices and experts alike.

Mix the hot water, molasses, oil, salt, dill, caraway seeds, and grated vegetables in a large bowl. Set aside to cool to lukewarm.

Mix the yeast, warm water and sweetener in a small bowl. Sit for about 5 minutes until the yeast begins to foam. When the vegetable mixture is lukewarm, add the yeast mixture. Mix in the wholemeal flour and 1 cup of the white flour. Beat for 300 strokes (What this instruction is all about is not explained and I would prefer a little more kneading so next time I don’t think I will bother with the beating but if you enjoy a little beating, go ahead).

Add rye flour and 1-3 cups of the white flour. (In the book it says enough flour to make a stiff dough. I don’t think I added enough and had heartache trying to knead it in so next time I would add 2 cups white flour.) Mix to a stiff dough.

Turn onto a floured board and knead for 10 – 15 minutes until the dough develops an elasticity akin to your ear lobe. I found it a soft sticky dough that constantly needed to be fed flour to stop it sticking to the board, but it may have been because I didn’t put in enough flour initially. It was amazingly pink and after kneading my hands smelt of molasses, but the flavour was more subtle in the end product.

Place dough in an oiled bowl, turn to make sure all sides are oiled and cover with a damp teatowel or plastic clingwrap. Let it rise 1½ hours in a warm place. Punch down the dough and knead briefly. Set aside again, cover and let rise another hour. This is a dough that rose quickly and ballooned over the top of my large mixing bowl.

Preheat the oven to 375 F or 190 C. When dough has risen a second time, punch down the dough and briefly knead. Oil two 12 x 23cm loaf tins. Divide up the dough into 4 or 6 pieces and knead into smooth balls. Divide these balls among the tins to form loaves. (I put one loaf in a tin and one on a baking tray so they look quite different - just use a baking tray if you don't have the right tins.) Cover and leave to rise about 45 minutes.

Bake for 35-60 minutes. (Mine took 60 minutes but the recipe said 35-40 – tap the bread to see if it sounds hollow. If the crust is still too soft it will not sound hollow.) Keeps well for a few days.

On the stereo:
Live at Royal Albert Hall on 2 November 2007: The Cinematic Orchestra
Posted by Johanna GGG at 22:59