A crumble that needs company 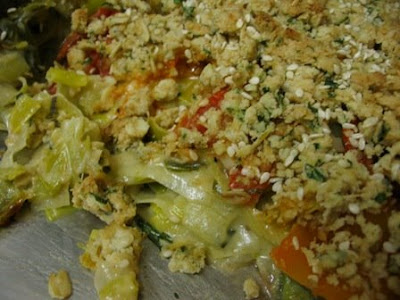 When my parents moved into their house over 20 years ago, the garden was just some scrubby grass. My parents are gardeners and have spent years nurturing a flourishing rose garden which adds great colour and character to the 1927 white weatherboard Californian Bungalow. (I just searched for a photo but I can’t find any except a nice green one of 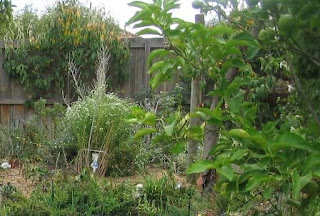 the back garden which is also a blooming miracle in the drought.) In fact when it was recently listed as a heritage building, the listing mentioned the garden.

I never appreciated gardening much when I was younger. I just wanted to look at the building. But as I have got older I have come to appreciate gardens much more. After all, those fine historic houses of Europe wouldn’t look quite so grand without their amazing gardens. So too, I never used to appreciate a side dish with dinner but these days I realise how important it is.

I was reflecting on side dishes last weekend when I made Lucy’s leek and tomato crumble. I have often treated leeks as always the bridesmaid never the bride. But I was attracted to this leek-centric dish by its promise of creamy comfort to be enriched by tahini.

Instead of simmering a tomato sauce to top the leek mixture, I roasted the tomatoes. Partly because I was avoiding watching another pot, partly inspired by Lucy’s recent stunning photos of roasting tomatoes, and partly because I was so excited by the variety of tomatoes in the supermarket. When you have the vivid glories of yellow roma, cocktail piccolini and grape

tomatoes, you don’t want to cook them into an unidentifiable mush. It was a delight to taste the intense juicy flavour brought on by roasting. I would also be interested in Lucy’s other suggested version of the recipe with extra tahini and no milk.

This dish was indeed comforting as if it was dredging up some memories of food of the past. The crisp buttery oaty crumble on top made a pleasing contrast with the creamy leeks and the occasional juicy tomato. Delicious but also rather rich. Excellent in small quantities and desperately in need of company.

The success of the crumble depended on the way it was served. The first night it was lovely but heavy with a great collision of leftovers: some roasted root vegetables left after my rosy bread adventures, tossed with rocket leftover from my lasagne and dressed with raspberry vinegar.

The second night the crumble didn’t fare too well when I piled it with roasted tomatoes and Brussels sprouts hoping to maybe lighten it with more tomatoes. Instead it just made the crumble soggy. Finally a small tub of it heated up for lunch the following day was very pleasing.

It is possible to get lots of variety in a one pot wonder as Meeta recently demonstrate in one of her mingles. But I have come to learn that the way to have such rich dishes with so few vegies is to serve them with a good salad or other side dish of bright fresh vegies. Kathryn is posting a informative series at the moment about eating variety of foods. I am sure she would agree that side dishes are an excellent way to increase the diversity in your diet. Like a house with a garden, a main dish with a side dish is usually much more interesting and pleasing to the eye.

Place tomatoes and garlic in a roasting tray. Drizzle with olive oil, season and toss to combine. Roast for 20 minutes at 200 C. When softened, remove from oven. (Or fry onion in a little oil, add tomatoes, season and simmer 20 minutes til thickened and pulpy.)

Heat 1 tbsp oil in a stockpot and fry onions for 5 minutes. Add leeks and cover. Heat on low for 5-8 minutes until soft, stirring occasionally. I needed a little extra liquid and tipped in some liquid from the tomatoes.

Add butter and stir while it melts. Then mix flour into buttery leek mixture and cook for 1-2 minutes, stirring constantly so the mixture doesn’t stick to the bottom of the saucepan. Add the milk and stir til combined. Bring to the boil and simmer for about 2 minutes. Stir in the tahini, season and remove from heat. Set aside.

Mix the flour, oats and herbs together in a large bowl. Rub in the cubed butter with your fingertips until mixed in and forming clusters resembling chunky crumbs.

Spread the leeks in a greased large baking dish (9 x 13 inches). Pour the tomatoes on top. Scatter evenly with crumble. Sprinkle the sesame seeds over the crumble. Bake for 20-30 minutes or until golden.

On the Stereo:
Discography: Pet Shop Boys
Posted by Johanna GGG at 16:29