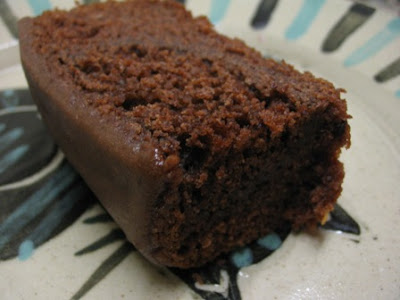 One of the most interesting series of posts I have seen lately is Wendy’s experiences in learning to bake the cake for her friend’s wedding. As a novice baker, she tried a few different recipes and solicited much useful advice from other bloggers. These posts and the comments that go with it are full of humour, drama and wisdom. The result was a spectacular cake.

So in the same spirit of sharing I thought I would share with you a recent misadventure with a chocolate cake. Many of my cakes are made to share with friends and family. Fortunately this one was made for just the two of us on a whim one night when I wanted a little comfort and saw an alluring picture that promised great things for my half can of condensed milk that was lurking in the fridge.

Chocolate, condensed milk and no eggs. Sounded like a perfect combination. So I followed Dhivya’s recipe and took it out of the oven after 20 minutes. The skewer came out clean but the top of the cake looked like it was so light as to be quite fragile. Nevertheless I tipped it out onto a teatowel on a wirerack, wanting to believe it was cooked. And then, not feeling inclined towards delayed gratification, I cut myself a piece or two of freshly baked cake.

The edges of the cake were a good light cake but the inside was oozing uncooked cake mixture. Now there are some cakes which benefit from a gooey middle but this is not one of them. This is an old-fashioned chocolate cake that develops proper crumbs rather than a rich sludgy molten 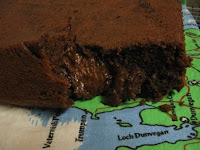 texture. Just the sort of cake my mum used to make. Luckily, it was made for comfort rather than to impress. I managed to flip it back into the cake tin and baked it in a low oven for another half hour. After that it was quite nice although probably a little heavier than it should have been. Fresh it was deliciously moist and soft. The next day I iced the rest of it which meant E was quite happy to share it.

Dealing with this problem, made me think about baking cakes. I often see it said that baking is a science and you can’t veer from the straight and narrow. A lot of comments in Wendy’s posts suggested she had to follow instructions to the letter but I was more inclined to think that with practice she would develop instinct. The more you bake the more you understand the science intuitively. My brother once worked at a cake shop and his boss never used a timer for a cake but used her nose to know when a cake was ready to come out of the oven. But I guess you need to know the rules to break them.

So later I gave some thought to why this cake veered off the tracks. Maybe my measurements were a bit out because I use Australian measuring cups which are a little larger than American. I confess to having a lackadaisical attitude towards measurements and methods at time. Most probably the problem was that my oven is not a particularly powerful one and the tin I used was probably a bit smaller than Dhivya’s.

I was pleased I was able to rescue my cake. (Wish it was as easy to fix the slow broadband connection we have been having the last few days! Grrr! It is taking forever to load this one wee post!) But back to the cake, we really enjoyed it as an after dinner treat. This is a good store cupboard cake to make when you need a quick chocolate cake fix. I will make it again but will be a bit more wary of baking times.

Combine all the ingredients together in a bowl and mix well. Pour mixture into a greased 15 cm (6") square cake tin. (Dhivya used a 15 cm round tin.)

Bake in a pre-heated oven at 180°C (360°F) for 20 minutes or till a skewer inserted into the cake comes out clean and the top of the cake feels springy. I baked mine for an extra 30 minutes at 150°C. Turn out onto a wire rack to cool. Ice with chocolate icing if desired.

On the stereo:
Searchlight: Runrig
Posted by Johanna GGG at 21:42