The pitfalls of pumpkin bread 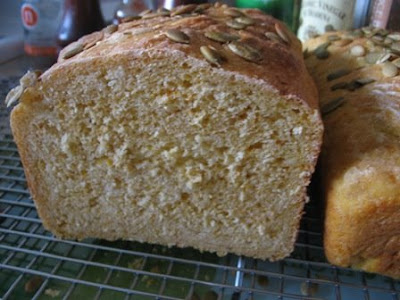 We are returned from a relaxing break on Philip Island (which I will write about soon). It was not a foodie paradise and I am yearning for some nice bread. When I went over the street for groceries when we returned I refused to buy bread from the supermarket because I feel like I have been deprived and need something special. I am hoping I might find something suitably pleasing at lunchtime tomorrow.

But meanwhile I have happy memories of a pumpkin bread I made a couple of weekends ago. Like many of my bread-making adventures lately, making it caused much angst and wonder at the recipe, but proved to be most enjoyable to eat.

I feel a bit vague in posting it because I think I jotted down the recipe from Cranks Bible but it is a few years ago now so I am not quite sure. And I thought I made some notes about making it 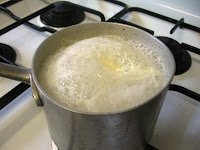 but they have disappeared so I am straining my memory.

My main memory is of the problems. Firstly boiling the milk was a challenge. Sounds so simple. Perhaps because it is connected to my childhood when things were so much less complicated than today. In winter my mum would heat milk to serve on our weetbix (cereal). I particularly loved brown sugar on mine so that when the milk was poured over it, the sugar went brown and gooey and reminded me of chocolate. Some things never change. But I hated milk skin. I am sure you know the skin that forms over boiled milk which reminded me of ripping skin off a sunburnt back. (I might still love chocolate but I get sunburnt much less these days, I am happy to report.)

So boiling the milk brought back some good childhood memories and also a few phobias. But I decided I would need to just cope with the milk skin. In fact, once the milk boiled down, the skin seemed to have become part of it. But I will be avoiding such reducing of milk by simmering in future, if possible. I did it just after I had cleaned the stovetop and the milk kept boiling over onto my clean stove. Grrrr! I actually cleaned around the gas burners a few times while reducing 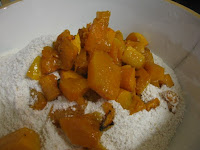 the milk in an effort to keep the stove clean. Makes me wonder why they call these little saucepans 'milk saucepans'. Seems cruelly misleading to unwitting bakers like myself with nice clean stoves.

I found the dough firstly too dry and had to add more liquid than suggested in the recipe. Then it was too soft once I started kneading it due to the chunks of cooked pumpkin in the dough. My hands were a mess by the time I finished the kneading.

All was forgiven once we had the lovely fresh, slightly orange coloured bread. Not huge loaves but delicious. I have tried to write a few of my personal notes in the recipe as a reminder to me and a warning to others.

I have also included photos of the loaf freshly cut and when it was cut when cold to show that it is my impatience rather than my ineptitude that makes it look soggy in the middle. And while I am telling you about my photos, you might notice the difference in colour which is because one is 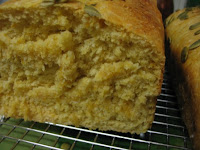 taken in a warm cosy night night and then other the next morning in cool wintery daylight. Plus, I can tell you that taking a photo of the milk boiling was risking it running over onto my clean stovetop yet again but the lacy bubbles were delightful to watch.

Lastly, I admit this recipe has hung around too long because I find bread recipes are quite complicated to write up. So I kept going onto the next recipe that was speedy to write. But I am really loving baking more bread than usual this winter and hope to continue to do so. I dream of finding a perfect bread recipe I can do again and again but my reality is that I am always finding something new to interest me so I anticipate writing a few more lengthy recipes before spring arrives. And that isn’t such a bad thing!

Preheat oven to 200 C. Place pumpkin in a roasting dish and drizzle with a little olive oil and sprinkle with a pinch of salt. Roast for about 30-60 minutes till tender and just starting to brown. Set aside to cool a little. If desired mash roughly before adding to flour (I will be tempted to do this next time I think).

While pumpkin is roasting, bring milk to boil in a small saucepan. The saucepan shouldn’t be too small as the milk boils over very easily. Reduce heat and softly simmer until milk has reduced by half. This took me quite a while and I had to tip it into my measuring jug to check how much it had reduced and then back to saucepan to simmer a bit more. Cool to lukewarm.

Dissolve yeast in water and mix into milk. Place flours, salt and pepper in a large mixing bowl and add milk mixture and roasted pumpkin. Add enough water (recipe said 50ml but I needed about 175ml) to make a soft dough and knead for 5 minutes. The recipe says to knead but leave some chunks of pumpkin. (This just didn’t work well for me but I did like the idea of chunks of pumpkin in a bread and may try again.) Add more flour if needed as you knead, especially if you have chunks of pumpkin squishing into your hands as you knead.

Place in oiled bowl, cover and leave in a warm place to double in size for about 1 hour. When risen, punch down and divide in two. Make into long sausages and place in two greased loaf tins.

Cover, place in a warm place to rise for about 40-60 minutes until doubled in size. Preheat oven to 180 C. Brush loaves with water or milk and sprinkle with pumpkin seeds. Bake 20 minutes or until golden and hollow when tapped. (Mine took about 30 minutes). Cool on a wire rack.

On the stereo
Pulp Intro: Pulp
Posted by Johanna GGG at 23:42