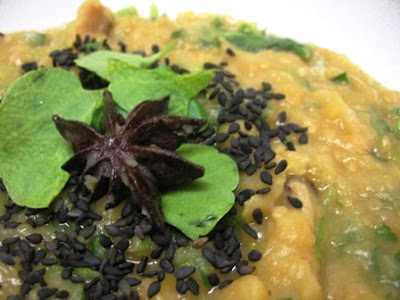 In fact it made me think about Michael Pollan’s directions not to eat anything your great-great grandmother wouldn’t recognise as food. She wouldn’t recognise this soup, although I know that he is referring to what is edible rather than what is recognizable. But it did make me think. What if I showed her a star anise or a piece of seaweed? Would any of my ancestors think you could eat them? Even within my own modern household, E is wary enough.

I have seen Michael Pollan’s books (The Omnivore’s Dilemma and In Defence of Food) in the stores and been tempted but it was only when other bloggers mentioned him being in town, that 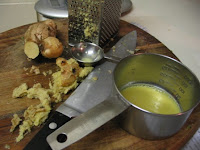 I read this New York Times article online. I like his stuff. He talks about the complexity of food and nutrition and he suggests we have not yet unlocked all the mysteries of the carrot’s soul. He reminds us that we are just part of a larger picture that depends upon the whole food web being healthy for our own survival. His wisdom is quite obvious – such as the reminder that the more a food is promoted as healthy, the less likely it is to be compared to fresh food – but a welcome reminder to think about what we are told by corporations. His refrain is: eat food, mostly plants, not too much.

His ideas reinforced mine. I agree with him that I should use gut instinct rather than in-depth nutritional knowledge to work out what to eat. Admittedly my inclination is partly laziness but I like his suggestion that we treat food as a relationship rather than a medicine. This resonates with my interest in food history. Best of all I am pleased to see him suggesting we eat less meat. I know that the world is not going to turn vegetarian (or at least not overnight) but it disappoints me that there is so little discussion of reducing meat consumption when people talk about green issues. So maybe I will buy one of his books.

But back to my soup. I really do find the star anise an odd object. Most like something you might find on a beach than a food of any sort. Pretty to look at but more ornamental than flavoursome. It is the first time I have used it. So E and I stood in the kitchen marveling at its beauty and smelling its scent. E wasn’t too keen on a liquorice soup.

But the soup was not reeking of liquorice at all. It was tasty, thick and warming with hints of shitake, soy sauce and ginger. The delicate greenery of watercress and spring onions plus the chewy slivers of shitake mushrooms give it a more complex texture than the hearty heaviness of 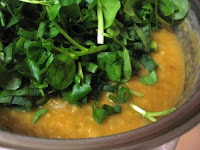 the more traditional split pea soup. Maybe it tasted even better because we waited until my pumpkin bread came out of the oven. An intense and interesting soup with freshly baked bread gives such simple and satisfying pleasure.

I made this soup for Holler and Lisa’s No Croutons Required event. This month Lisa is host and has asked us to make a soup or salad with legumes. For this event I wanted my soup to look as amazing as it tasted and so I used my star anise to garnish it. If you wish to do so, remember it is pretty to look at but not edible so remove before digging your spoon in. Maybe you might say that my great great grandmother would have been right about that. Aren’t they always!

Place the shitake and star anise in a small bowl or measuring jug and pour 2 cups of boiling water over them and leave for about 10 minutes or until the shitake to soften. If your shitake mushrooms are whole, remove from water and slice thinly. Return to water and set aside.

Heat the oil in a medium-to-large saucepan. Fry the onion, white part of the spring onion and garlic over medium high heat for about 2 minutes or til they start to soften. Add the sherry and cook over high heat for about 30 seconds or til most of the liquid has evaporated.

Add 4 cups water, sherry, split peas, salt and shitake/star anise water that was set aside. Bring to the boil, cover and simmer for about 50-60 minutes or til split peas are soft and mushy. Stir occasionally and taste from time to time to check if enough flavour released from star anise. Remove star anise early if required but I just removed them when the peas were cooked.

While the soup is cooking prepare the ginger juice by finely grating the fresh ginger and squeezing it between your fingers til you have made up 1 tbsp. Discard the wad of ginger pulp. The juice made by my ginger was cloudy and amazingly yellow. Set aside.

When the peas are cooked remove star anise and stir the soup to encourage the peas to dissolve and thicken it. About 5 minutes before serving add the watercress (keep a few sprigs aside for garnish if desired), spring onion greens, soy sauce, ginger juice and sesame oil. Cook until greens have wilted. Serve garnished with toasted black sesame seeds and a few sprigs of watercress (and star anise if you are aiming to impress).

On the stereo:
Greatest Irish Bands: Various Artists
Posted by Johanna GGG at 21:32