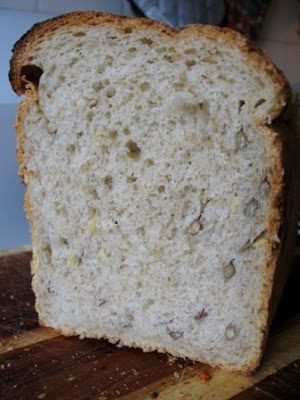 When Zorra asked us to make sprouted bread to celebrate a year of her wonderful Bread Baking Day event I thought I should bow out gracefully. I love baking bread but I have never made my own sprouts (unless you include growing some wheat grain in a piece of wet cotton wool at primary school).

Sprouted bread is mentioned in the Old Testament of the Bible and apparently is less processed and full of nutrition. (These links give interesting information on sprouting wheat and biblical or essene sprouted breads but a quick search of the internet will turn up more.) Encouraged by Zorra, when Yarrow and I were planning a winter solstice meal, I suggested we try some sprouted bread. He is an experienced bread baker but hadn’t encountered such recipes. However Yaz is always up for a challenge and was willing to join me in the adventure.

The first hurdle was getting organized enough to get some sprouts happening before Saturday. Yaz offered to do the sprouting. Phew! One day I will get into sprouting but life is too busy for 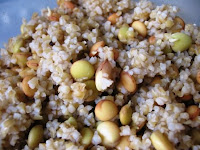 me to get my head around it right now. On Thursday evening, he rang to check what was needed.

I read out the list of possible grains to sprout – kamut, quinoa, rye, spelt, wheat, triticale. Yarrow had been thinking along the lines of sprouting legumes. As that was all he had on hand, he sprouted some green lentils and added some bulgar wheat. Since then I have checked Zorra’s instructions. She suggests sprouting grains, legumes, nuts, seeds. But at the time, all I had was a recipe I found on the net.

Sprouting done, it took us over 5 hours to bake the bread. But we were happy to chat and surf the net. When I mentioned vintage vegetarian cookbooks to Yaz, he helped me search for some online while the dough was rising. It was hard to tear ourselves away from the fascinating books we were discovering and return to the risen dough. We also had other cooking to do for dinner, dishes to do, and at one stage cycled back to his house for some extra bread tins.

When we arrived back at my place with the tins, we were greeted by dough that was bulging over the edges of the bowl. It looked more like a monster in a sci-fi movie or yet another media report on Australia being the most overweight country in the world. My mixing bowl looks huge u 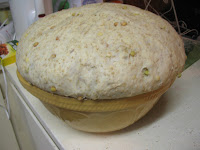 ntil it is dwarfed by such large quantities of dough. Yaz has decided he doesn’t like oiling the bowl for the rising dough and was quite pleased with the difference this made to the feel of the dough.

Once the loaves had risen in their tins they went into the oven. It all seemed perfect. The three tins fitted on the top shelf of my oven while slices of turnips cooked in a buttery liquid below. Yaz said this was good for giving some moisture to the bread.

Unfortunately, I had impressed upon Yaz just a little too much how my slow-poke oven always seems to be lacking in fire power. So he turned up the heat and when we commented to each other just how good the bread smelled early in the baking, neither of us thought to check it. Usually I turn around cakes and bread midway, but I was too distracted by other foods we were preparing. I probably should have also told him that my oven bakes unevenly!

It was close to the end of baking that I thought to check and found the loaves were quite burnt on top because they were so close to the top of the oven. Much huffing and swearing followed. We turned the bread upside down in the bread tins for the rest of the baking time to make sure the tops had minimal additional colouring and that the bottoms crisped up. It worked but we couldn't fix the damage already done. However, we got away lightly considering Yaz was working with an unfamiliar oven and we were juggling lots of dishes.

Despite some burnt tops, the bread was a great success. It was light, airy and fluffy with the occasional nubbly sprout in it. The crust was mostly crisp and chewy, apart from the odd bit of charcoal. My timing was unfortunate because yesterday I had to fly to Darwin for a business 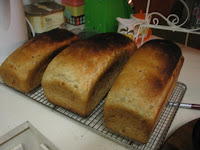 meeting. Here I am stuck with ordinary bread while my lovely homemade bread is many miles away. I have put some in the freezer which gives me even more reason to look forward to getting home in a couple of days.

Now that I have a taste of sprouted bread, I think I should learn to do some sprouting. Thanks to Zorra for another great theme for Bread Baking Day! If you are after more interesting bread recipes I would recommend you head over to Wild Yeast where Susan has started a YeastSpotting round up of recent posts by bloggers on baking bread.

Combine yeast and warm water in your largest mixing bowl for about 5 minutes to proof (or bubble a little). Stir in 2 cups of flour and leave to proof for about 30 minutes. Add oil, honey, salt, sprouts and 2 cups of flour. Mix well. Place in unoiled bowl and cover with a damp teatowel. Set aside in a warm place to rise for about 45-60 minutes.

Add about 4-5 cups flour to make a dough. Turn out onto a lightly floured board and knead for about 10 minutes or til it feels a little elastic (ie the gluten will begin to develop). Our dough was a little sticky and needed a little flour as I kneaded it. Return to the bowl, cover and set in a warm place to rise for 60-90 minutes until doubled.

Punch down the dough and cut into three pieces (or two if you are making two loaves). Place each piece into an unoiled loaf tin or onto a baking sheet. We flattened each piece into a long oblong and folded in half and then in half again and sealed the edges which Yaz says gives it more air but this method is optional. Cover and set aside to rise for 60 minutes until doubled.

While loaves are rising, preheat the oven til 190 C or 375 F. When loaves have risen, spray bread with some water to make it more crusty. Bake for 35-40 minutes. Some moisture in the oven (such as simmering vegetables) is helpful but not necessary. The bread is ready when the loaves are golden brown and sound hollow when tapped. Cool on wire racks.

NOTES:
* Sprouted from ⅔ cup green lentils and 1⅓ bulgar wheat soaked overnight on Thursday and then sprouting a day. Other sprouted grains or legumes could be used but these were chosen because they don’t take long to sprout. We used a bit more sprouts than the recipe called for which meant we also used a bit more flour. Yarrow also noted that the bulgar wheat just held the water rather than soaking it up so it probably needed more flour.

** We used mostly white bread flour with a little rye flour but other wheat and rye flour combinations could be used. The recipe suggests if you use whole wheat or rye flour you could add 1/8 wheat gluten per cup of flour to give a better result.

On the stereo:
Viva Hate: Morrissey
Posted by Johanna GGG at 18:16