The Best Rice Pudding Ever! 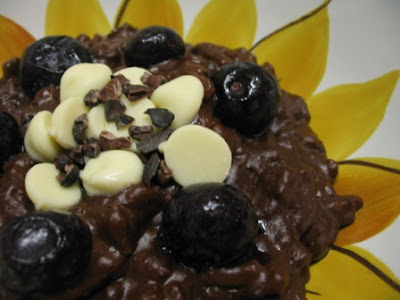 Recently I found an enticing recipe for a rich Nigel Slater recipe in the Observer Food Monthly, a baked creamy pudding that took my fancy. It is just his sort of British comfort food. In Toast he write of his love for his mother’s version which had to be sipped like a broth rather than a creamy risotto texture: ‘Warm sweet milk was what a mother should smell of,’ he writes.

When I was little, my mum frequently made sweet milky, soft rice pudding with plump raisins. She served it with cold milk and granular sugar. I thought it was what everyone ate. Then I discovered Chocolate Rice Pudding.

This is not rice pudding the way your mother made it. It is not cozy cottages, hot water bottles and slippers warming by the fire. You wouldn’t find it in an Enid Blyton story or an Ealing comedy. No one would be mumbling ‘mustn’t grumble’ because they’d be too busy telling each other it was ‘fabulous dahling, mwah mwah!’

Everything tastes better with chocolate and when you make this the proof is indeed in the pudding. This is dark, rich, creamy and better than I ever could have imagined rice pudding 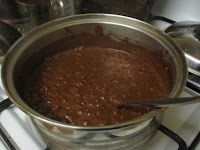 This is a fine choice for when your vegan and gluten free friends dine with you. My advice is: don’t serve this with a mole-style chilli non carne, don’t buy cream to serve it with but forget to buy milk, and don’t feel the need to be generous with this rich dessert. Be creative with garnishes. It is a great way to use cocoa nibs if you have some about. I would love to serve it with baked fruit. But however you serve it, you won’t regret encountering this delicious, indulgent and surprisingly easy dessert.

Bring water and to the boil in a small-medium saucepan. Add rice and simmer on low heat with the lid on for about 20-30 minutes (it took me 20) or til rice is soft and water is absorbed.

While rice is cooking blend milk, cocoa, sugar, nut butter, wattleseed and cinnamon til smooth. Taste and add more sugar or more cocoa as desired. (The recipe heeds that the sweetness is slightly diminished when the mixture is added to the rice.)

Stir the chocolate mixture into the cooked rice. Bring to boil, being careful that it doesn’t boil over, and simmer on low heat for about 5 – 10 minutes (it took me 5), stirring frequently. The recipe says to cook til pudding thickens and some rice is visible on the surface but warns it will be soupy and thicken more as it cools. I didn’t think it needed much simmering but was happy for it to be quite liquidly.

Serve immediately, or cool slightly while you eat dinner and then reheat briefly, or store in the fridge up to 4 days and reheat when ready to use. Serve garnished with blueberries, cocoa nibs and choc chips if you feel like being fancy.

On the stereo:
Under the Covers 1: 60s Pop Primer - Matthew Sweet and Susanna Hoffs
Posted by Johanna GGG at 23:30